If you should ever be so fortunate as to meet Oscar-nominated actor Bruce Dern, ask him to do his spot-on Alfred Hitchcock impression. You won’t be sorry. Dern acted in two Hitchcock movies, Marnie (1964) and Family Plot (1976), as well as in Hitchcock’s 1960s TV series, The Alfred Hitchcock Hour. At 84, Dern, who grew up in the Kenilworth and Glencoe area and graduated from New Trier Township High School (class of 1954), continues to act on a regular basis that someone half his age may find exhausting. In his latest movie, The Artist’s Wife (Strand Releasing), Dern plays Richard, a renowned painter who has been diagnosed with Alzheimer’s disease. His illness not only takes a toll on him, but also his long-suffering wife Claire (Lena Olin), his estranged daughter Angela ( Juliet Rylance), his students, and ultimately his talent. Dern, who came into his own in the 1970s as part of what was known as the New Hollywood movement, via his work with Jack Nicholson and Bob Rafelson, was kind enough to answer a few questions, in very colorful language, before the release of The Artist’s Wife.

What was it about the character of painter Richard in Tom Dolby’s The Artist’s Wife that drew you to him as an actor?

I didn’t know who Tom Dolby was. I had heard of his father, Ray Dolby. He invented the sound system in every theater in the world. Ray died when he was 58 of Alzheimer’s and Tom had to grow up with that. Why I met him and agreed to do it was because it had a few interesting challenges in it. I felt that I wanted to investigate for myself, so I can make sure if I’m getting it when I’m getting it—I’m 84—I wanted to see what it would be like to not be able to gather things together or remember things or even get through a day without forgetting something. What in – trigued me was that this guy forgot how to paint. He forgot his whole life. The challenge to me of the movie, which I think I ended up convincing Tom of, was he’s got me painting that white canvas with white paint in the studio, all through the movie. That’s because, I know that painting is not just from the heart, but you have to have an idea. He had no ideas. I had this suggestion and then we went through it. Later in the movie, he sud – denly realizes there’s nothing really left that he’s remembering every day. My mind is cluttered with a bunch of stuff. So, he takes all the stuffing out of couch pillows and started throwing it on the canvas. Actually, the painting was more an instal – lation than a painting. 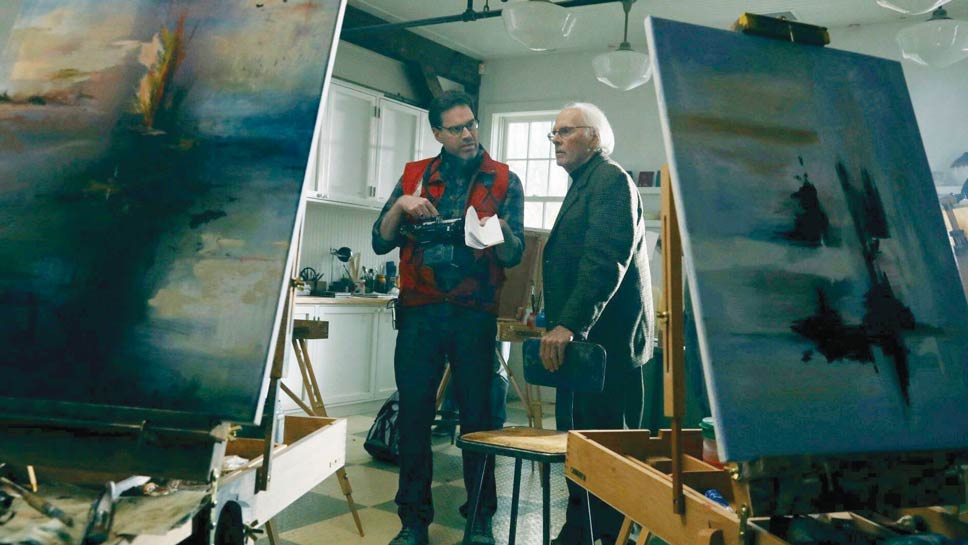 Tom Dolby and Bruce Dern in The Artist’s Wife.

Right, it became a mixed-media piece. Richard paints which, like acting, is a form of creative expression. Do you also paint or play a musical instrument or have other sorts of creative outlets in addition to acting?

When I was 10 years old, the people in my household felt that the best thing for Brucie was that he was in the way, he was a mess, he couldn’t tell the truth, so let’s teach him how to play the tuba! So, I had to ride my bike from where I lived on the Glencoe/Winnetka border off Sheridan Road on the lake. So, I never learned. I took one piano lesson and didn’t get it. 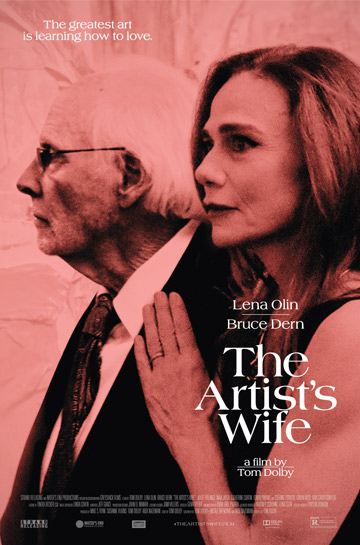 I’m glad you men – tioned the people in your household. Would you please say something about them? 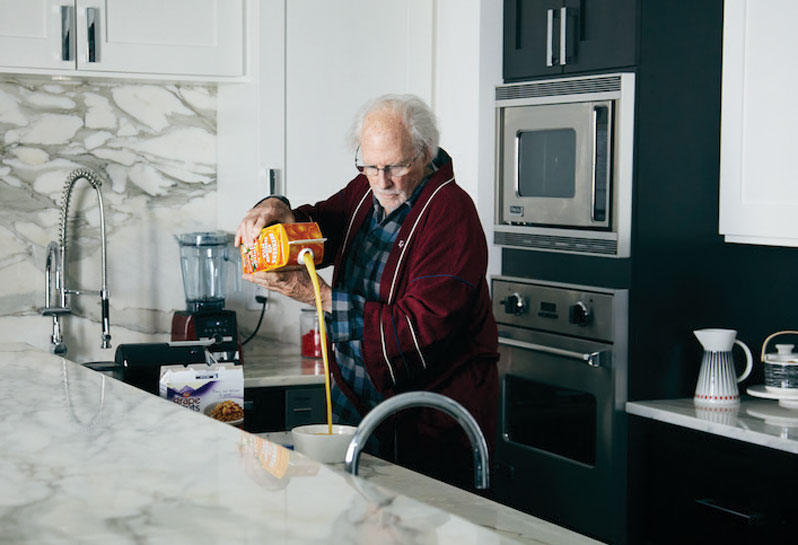 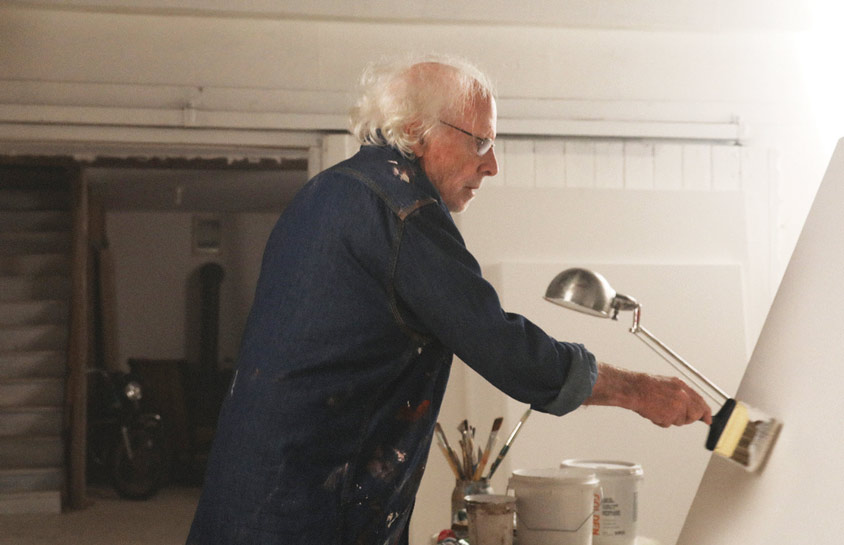 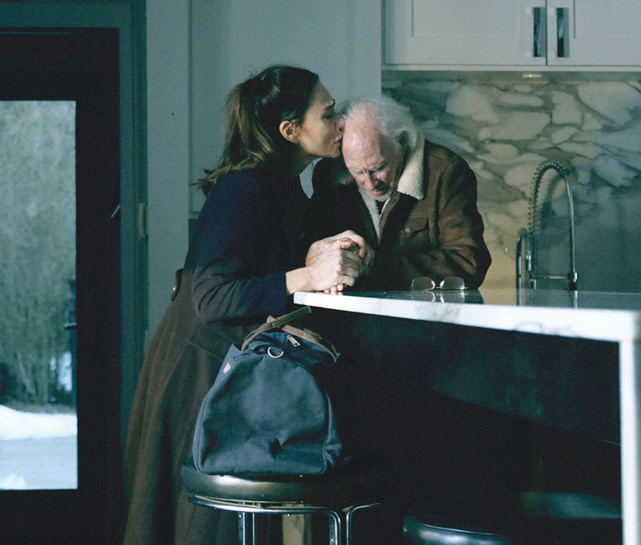 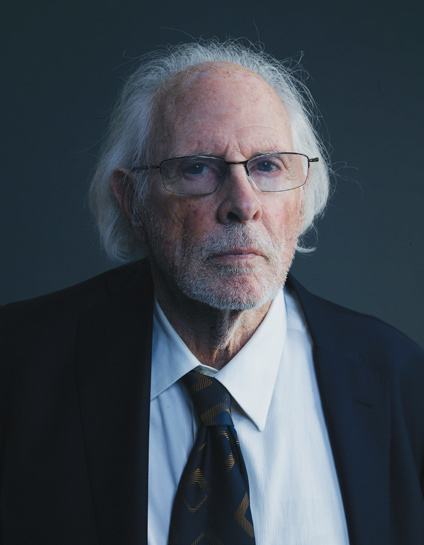 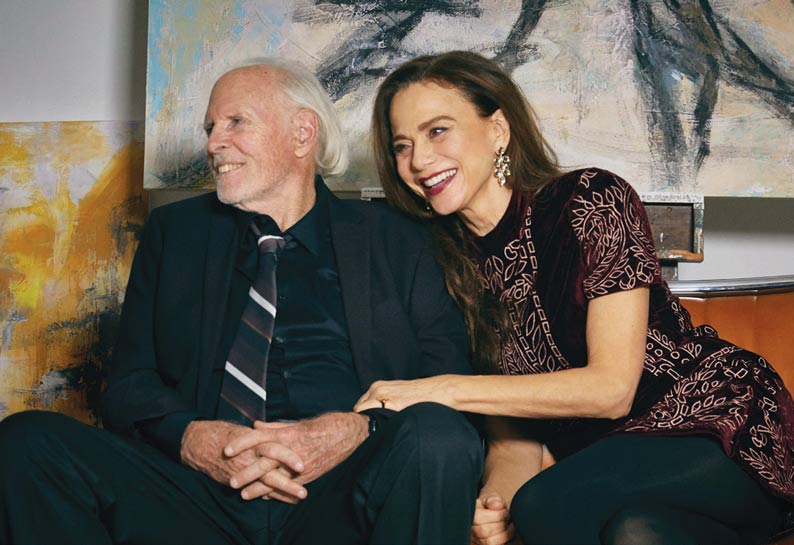 You can imagine who was at my (fami – ly’s) dinner table. My grandfather Dern was Secretary of War. He had been the first nonMormon governor of Utah, from `24 to `32. In 1932, Roosevelt was elected and made my grandfather Secretary of War. My grandfa – ther died in office, the day I was born, June 4, 1936. My grandfather MacLeish’s brother was (the writer) Archibald MacLeish. The last 50 years of his life he was the Boylston Professor at Harvard. My biggest ap – preciation of people in life is people that get (stuff) done. I was in a family of some folks that got stuff done. My godfather, my father’s law partner at Sidley Austin, was Adlai Stevenson. He ran for President twice. First, he was a Senator and then he was the Governor (of Illinois). He came to see me in Sweet Bird of Youth, a Tennessee Williams play directed by Elia Kazan, starring Paul Newman and Geraldine Page. Mr. Kazan was aware of all of this stuff in my family because he directed J.B., which was written by Archibald MacLeish.

Throughout your career, you have worked with some amazing directors, including Patty Jenkins, Alexander Payne, Sydney Pollack and Hal Ashby, to mention a few. It’s particularly notable that you worked twice with Alfred Hitchcock (Marnie and Family Plot) and three times with Walter Hill (The Driver, Wild Bill and Last Man Standing) and Quentin Tarantino (Django Un – chained, The Hateful Eight and Once Upon a Time in Hollywood). What are the challenges and rewards of working with the same director more than once?

I’ve always said I’ve worked for six genius direc – tors in my career. Not in order of importance or anything, but they are Mr. Kazan, Alfred Hitch – cock, Douglas Trumbull, Francis Coppola, Alex – ander Payne, and Quentin Tarantino. Everybody always asks, “Why those six guys only?” Who am I leaving out? I’m leaving out Hal Ashby, John Frankenheimer, I’m leaving out a bunch of really gifted directors. They ask, “What makes a genius to you?” I said, “(What makes them) a genius is a director’s availability on the set to any crew member at any minute to come up and be asked a question and give you an answer and not brush you off.” Steven Spielberg once asked me, “What does that entail?” I said, “I haven’t worked with you, so I can’t put you up there.” What it also means is that each one of them is a professor. They love to tell you how we got to that day and that moment.

In your 2007 memoir Things I’ve Said, But Probably Shouldn’t Have, there’s a chapter about Glencoe in which you write about making the movie Middle-Aged Crazy with fellow New Trier alum Ann-Margret. Over the course of your lengthy career, have you had the chance to co-star and interact professionally with other New Trier graduates?

A couple of times. The girl who played in Coming Home with me, who played Jane Fonda’s girlfriend, Penelope Milford, she went to New Trier. Then I did The Astronaut Farmer with Virginia Madsen; she went to New Trier. I never worked with her, but I really like her, Christine Ebersole went to New Trier. Here’s one for you—these two guys were in the graduating class of ’39 —Rock Hudson and Charlton Heston! Also, Richard Widmark went there for a year, and Hugh O’Brian went there, too. In the senior class, when I was a freshman, was Anita O’Day, the jazz singer. My freshman year, the president of the senior class was Donald Rumsfeld.

Do you ever have occasion to get back to the old neighborhood?

I’ve been back. I did a couple of those autograph trade shows at the convention center in Rosemont.

Finally, as both an actor and a father, what did it mean to you that your daughter Laura won an Oscar for her performance in Marriage Story?

First of all, when she got her first nomination for Rambling Rose (1991). Her mom (Diane Ladd, who co-starred in Rambling Rose), I think, are the only mother and daughter to be nominated from the same movie. Laura, her mother and I are the only family that have stars on Hollywood Boulevard. There are other families, but not mother, father and child. I said to Laura, when she was nominated the first time, “The win is the nomination; not the Oscar. Nobody is better than everybody else in any one year. The thing you have to remember is that you have a seat at the table for the rest of your career.” Rambling Rose was a wonderful movie and what’s interesting about it is the first movie I did for Kazan, Wild River, was written by Calder Willingham, who also wrote Rambling Rose.

Wow! What a small world.

When Laura won, I didn’t know anything about the movie. She told me one day she was doing a movie where she had to go after guys. She was playing a lawyer representing a woman in a divorce. I said, “Laura, if that’s what you have to do, you have to do yourself a favor. You are always so nice to people. You are never condescending. Always rooting for the underdog and wanting to put an arm around them. You never rip anybody… This is the movie where you’re coming out of that closet.” She said, “But Dad, you mean…” I said, “I mean me in The Cowboys (1972 Western in which Dern’s character kills John Wayne’s character).

Yes! Or me going nuts (as a terrorist) in Black Sunday. She said, “You mean (go) that far?” I said, “Take it to the limit, but stay within bounds.