Home is where the heart is. And the office.

Changes to our lives brought on by the COVID-19 pandemic have altered, perhaps forever, how we view our homes. For many, they’re now offices and classrooms, in addition to remaining our more conventional living spaces. This expanded definition of home, and the need to do more than just live in them, is helping to drive strong growth in the real estate market on the North Shore.

July and August are normally some of the slower months of the year due to vacations, parents driving kids off to college, and the need to soak up those last few days of the Midwest summer sun, But North Shore real estate professionals say they are busier than they’ve been in years. In Lake Forest, for example, market data shows closed sales up nearly 70 percent in July 2020 over July 2019, with sale prices rising 10 percent. By the same measure, inventory is down 37 percent.

“We started staring at our computers in March and April and I did more Zoom calls than I ever wanted to do in my entire life, more training,” says Daria Andrews, a broker with @properties in Lake Forest. “Then in mid-May and June it got really busy and July and August got insanely busy. Our whole year has changed, and it’s been the real estate market up here along the whole North Shore that’s been the silver lining.”

Properties that have been on the market for years in Lake Forest are suddenly moving, and many sellers are receiving multiple offers. Lisa Trace with the Trace Team and @properties in Lake Forest, says that when COVID-19 restrictions were lifted, the flood gates opened.

“As soon as the doors started opening up a little we were flooded with demand. There was a lot of pent-up demand,” Trace says. “This was in all price ranges but what was interesting was the higher price range. You can’t find anything in the million-and-a-half and two-anda-half price range in Lake Forest anymore.

Other factors in Lake Forest’s resurgence might also be at work. Joanna Koperski, an @ properties broker in Lake Forest, cites the traditionally low property taxes in the village.

“I think Lake Forest is particularly attractive because we have the lowest property taxes on the North Shore,” Koperski explains. “We keep our multipliers the lowest.”

Other communities on the North Shore are seeing similar activity. Winnetka-based @ properties broker Louise Eichelberger says in the past low interest rates have helped spike buyer interest, but she can’t remember a summer like this one.

“We’ve had other summers when interest rates got really low and that started things up. The first-time buyers would buy, and the second time buyers could move up into something,” explains Eichelberger. “But the amount of activity and showings now is unprecedented.”

Eichelberger adds that August is usually the second slowest month of the year behind December but that’s been turned upside down this year. She’s surprised by the diversity of age groups that are looking to buy in Winnetka and surrounding communities.

“I’m at the stage of my career where I work with a lot of young couples and I work with people my age,” she says. “In the last couple of weeks, I have sold three properties to three sets of grandparents—one from out-of-state, one from the city, and one from a suburb further away. Everything is being driven by their wanting to be closer to their kids and grandchildren.”

While most realtors and brokers North Shore Weekend spoke with for this report see a continuing trend in buyers wanting homes that are up-to-date, new, or little-used, it’s a different story in Glencoe. Older homes are in high demand.

“Since the market supply is so short, we are getting buyers who are willing to move here and fix up houses whereas before the pandemic buyers only wanted homes that were turnkey,” says Jody Dickstein, a broker with @ properties in Glencoe.

“Glencoe is a small community and has a lower population than the other North Shore communities, so it’s always been a special place to live with fewer choices,” she says. “Ranches are in high demand and, pretty or not, they get swooped up. I love when someone asks for a ranch with a pool. I say, ‘Get in line’.”

“It’s all due to the pandemic, and younger couples and families want out of the city. All of a sudden they want a yard,” Pickus said. “A number of my clients told me they weren’t going to do this for a few more years, until the kids got bigger, but they’re ready now.”

“Before this a lot of them didn’t want to commute. They were thinking commuting was cutting into their family time,” Pickus says.

“But now that they can work from home and even if it’s just for two or three days, it’s worth it to move out.”

While many couples and families are buying on the North Shore to obtain additional space for life under this “new normal,” some are looking for a lot more space. Julie Morse, a broker with @properties in Lake Forest whose territory runs from Lake Forest up to Lake Geneva, is seeing something of a “back to nature” movement at work.

Morse believes that because of cancelled vacations and travel restrictions due to COVID19, many buyers have rediscovered their love of the great outdoors. That renewed appreciation, she says, is translating to strengthened interest in larger properties such as horse farms and country estates. She has seen high demand for two large properties in Mettawa, one that just went under contract and another that’s just gone on the market.

“The interest is from younger and older individuals. Everyone is a nature lover at heart, and it’s been wonderful for that market,” says Morse. “They’re coming from the city and they’re coming from right down the street where they have a half-acre, but they want five acres so they can bring their horses home.” 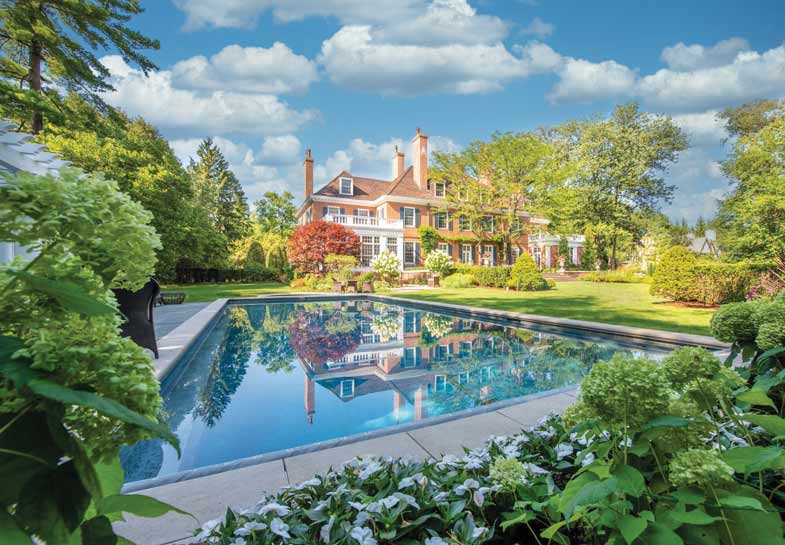 Noted architect Denison Hull built the home at 115 De Windt Road in Winnetka in 1936. Only four families have lived there since. The home will be listed soon by Jena Radnay with @properties.

Morse adds that because of the pandemic, she sees people revamping their lives. Rather than having a vacation property, buying a larger property as their primary residence is now an attractive option.

“I’ve been in this business almost 24 years and I think these are distinct changes,” she says. “There’s always been a nature market, but I think now it’s much more broad-based.” 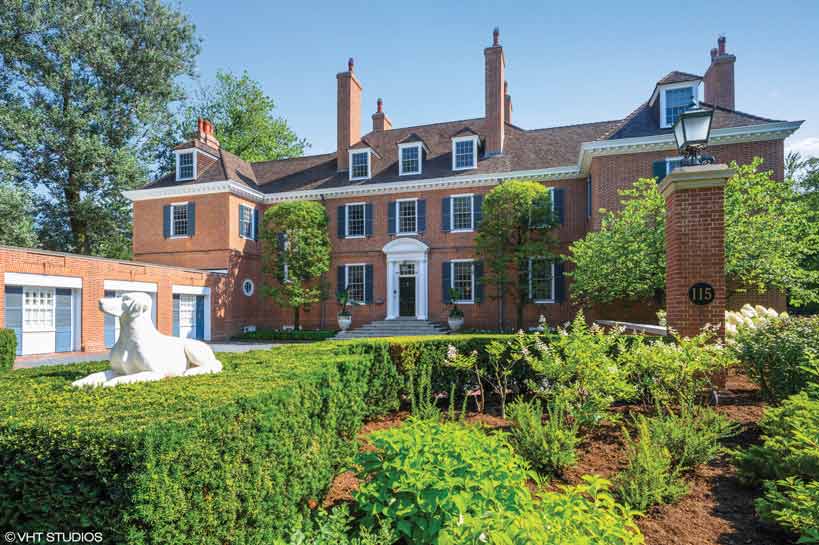 The front of the home at 115 De Windt Road in Winnetka features a magnificent courtyard entrance with exquisite landscaping. 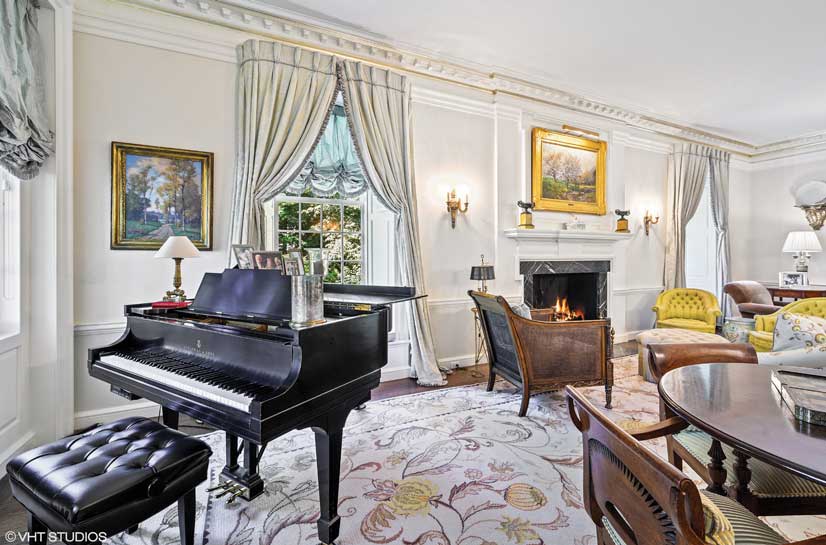 The living room at 115 De Windt Road in Winnetka is spacious and ideal for entertaining large parties. 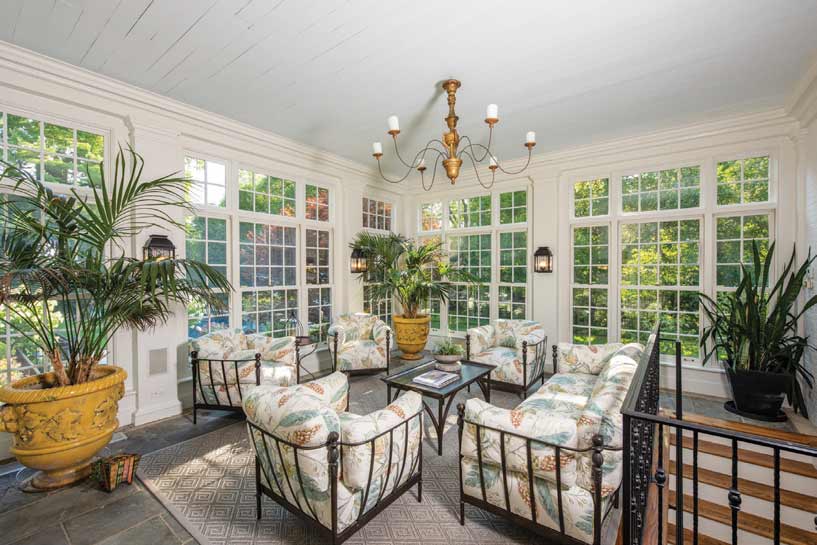 The four-season sunroom at 115 De Windt Road in Winnetka overlooks the pool, spa, and cabana.

While the market is seeing increased demand for properties of all shapes and sizes, Carrie Tarzon, a broker with @properties in Winnetka, sees what’s happening this summer as a continuation of what started as a strong market at the beginning of the year. COVID-19 served as more of a speedbump than a roadblock. 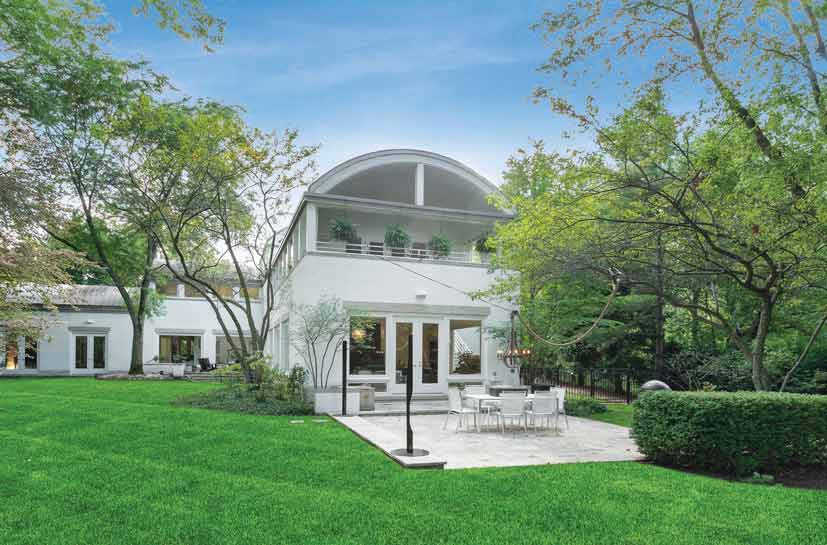 This home in Ravinia at 732 Bronson Lane in Highland Park (Louise Eichelberger @properties) is one block to the beach, restaurants, and school. It features fabulous porches and terraces on a private acre.

Tarzan said the shortened school year—the teachers’ strike at the beginning of last school year and then the COVID-19 shutdown—likely accelerated the decision for city dwellers to look at the North Shore, boosting demand. 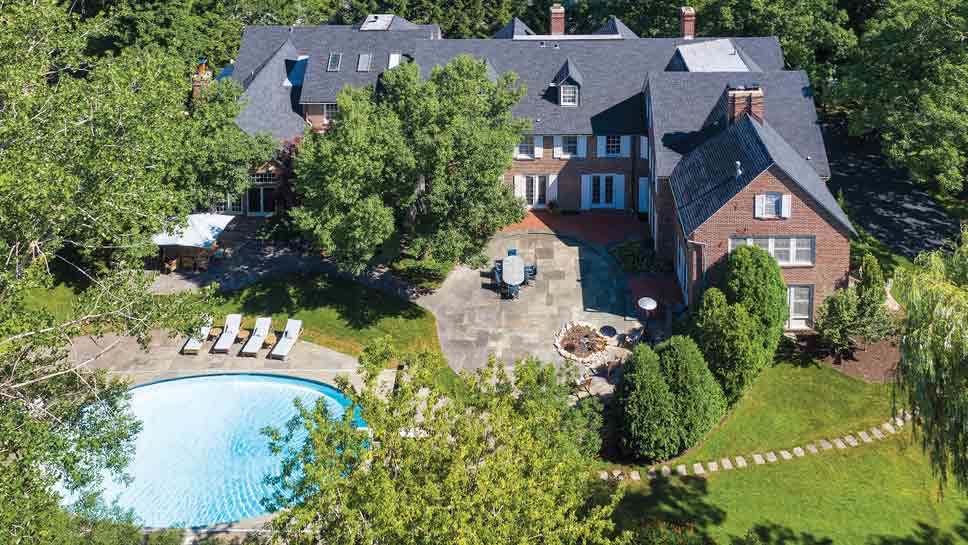 This architecturally significant home at 976 Oak Terrace in Glencoe (Louise Eichelberger @properties) features extensive updates on 1.25 acres with a pool and is near the lake and village.

“I don’t think it made them do anything they weren’t going to do in the future, it’s just what happened,” Tarzan says.

Those that do move up to the North Shore from the city do not need to sacrifice the sense of the community they may have found in more urban areas, explains Kelly McInerny, a broker with @properties in Lake Forest. Downtown areas, and even many subdivisions throughout the region, have plenty of community spirit to offer. 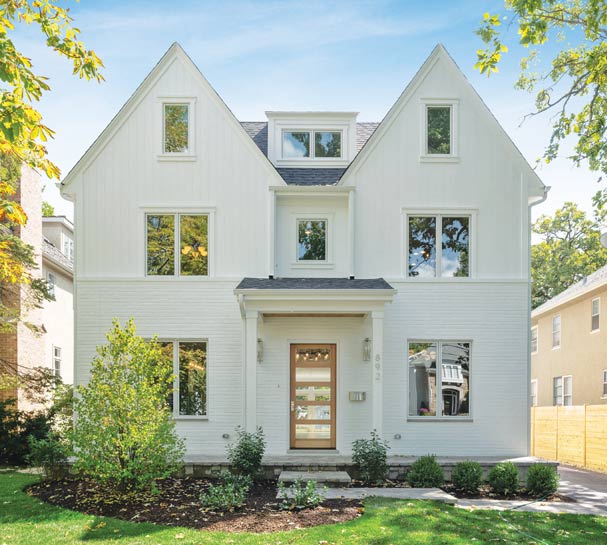 “People coming to the city are used to having community, so they come up here and buy a bigger house with a pool, but they’re going to find that they miss their community,” McInerny says. “Middlefork Farms Subdivision is a bit further from town in Lake Forest, but it’s a newer subdivision that has walking trails and is a really tight community.” 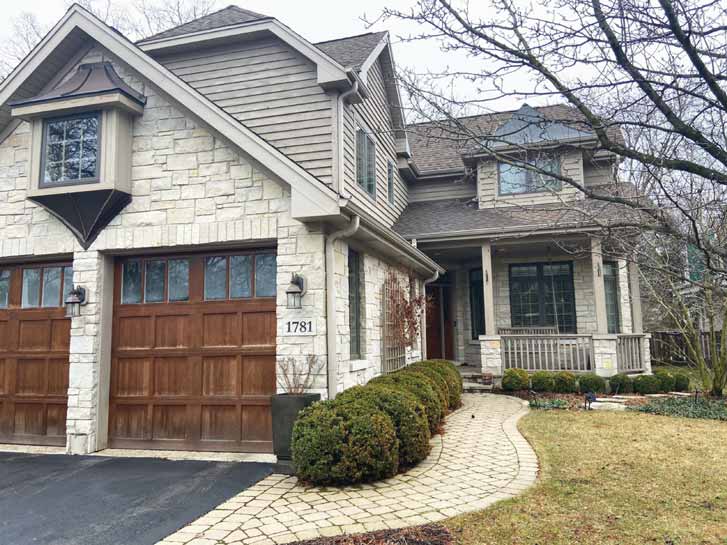 While the demands of buyers are contributing to the tightening of the market and to the decrease in inventory on the North Shore, the same factors that are motivating buyers are keeping people in their homes, causing fewer homes to come on the market. If you’ve got the space, keep it. 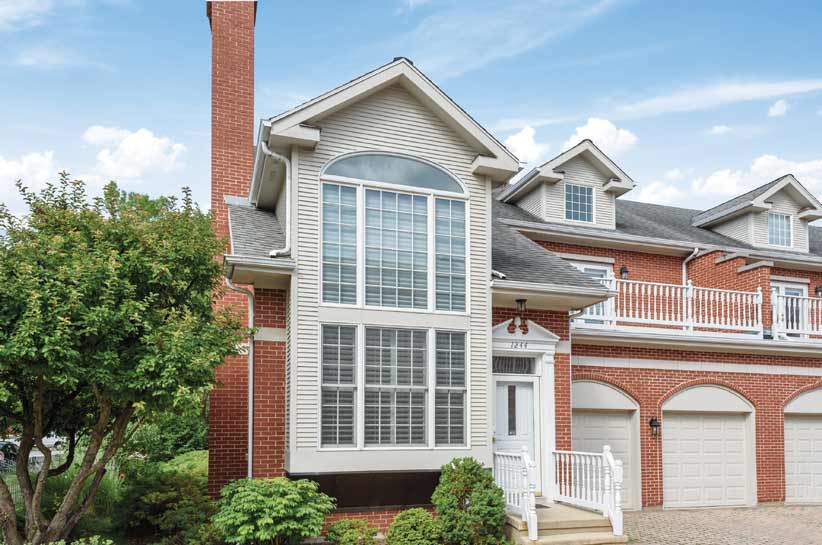 Jena Radnay, broker with @properties in Winnetka, says there’s been an explosion of rehabs on the North Shore because people want to stay in their homes and retrofit them with offices or study rooms to adapt to the postCOVID-19 era.

“People are reinvesting in their homes right now. They’re redoing their kitchen. They’re putting more money into their homes because they value them,” Radnay says. “Obviously, because of the world changing the way it is with COVID-19 right now, people have a different relationship with their house. It sounds weird, but they see it now as something they really need to spend money on, fix things, take better care of it.”

Staying at home for months, Radnay says, also might’ve made people who were thinking about moving away from the North Shore reconsider, having had time to reacquaint themselves with the community’s amenities.

“It’s people finally believing in the whole idea that the suburbs really are a destination for everything,” she says. “There’s a bigger lifestyle change that’s happening now and a house is a piece of it, but it’s everything else.”

Post-COVID-19 life Is going to continue to be unpredictable, so it’s challenging to try and analyze what’s happened this summer in the context of short or even long-term trends.

Will this period of migration last, or is it more of a small bubble?

“Every once in a while, you see a cycle where it goes back to the suburbs and I really think this is what has kicked in again,” explains Jones. “The city will be popular for 10 years and now the suburbs will be. I don’t think it’s necessarily going to be kids who always push you to the suburbs anymore.”

Sharon Friedman, now with @properties in Glencoe, has been a broker on the North Shore for 38 years. She has seen the ups and downs in the market over the decades and takes the long view when it comes to analyzing the current uptick in the market.

While the market now is strong, it’s not what Friedman would call a boom market just yet.

“It’s not a boom market, that’s not the case now,” she says. “It’s picked up considerably from where it was, but in order to get a house sold you still have to have it looking really great and it has to be priced right, or it still could sit.”