Lake Forest native and former Northridge Prep High School golf captain Will Lyon has zero interest in shooting for a green jacket at the Masters.

He’s been too busy succeeding wildly in a white lab coat at the University of Illinois.

What Lyon, a senior chemical and biomolecular engineering major, sees under a microscope means more to him than what any under-par round of golf does.

“I don’t play as much golf as I did in high school,” Lyon admits.

But he continues to ace courses that are all about centrifugation and statistical thermodynamics. Lyon’s drive and approach in college classrooms earned him a Barry M. Goldwater Scholarship worth $7,500 in March. Recipients were recognized for their potential to contribute to the advancement of research in the natural sciences, mathematics, or engineering at the graduate-school level.

Lyon aims to get a Ph.D. in organic chemistry and later land a job at a pharmaceutical company.

“I’m interested in the drug-discovery process, in developing cures to diseases, and in saving lives,” says Lyon, an alumnus of Deer Path Middle School in Lake Forest. “I’ve been getting valuable experiences in lab work at Illinois, especially this summer, with an opportunity to work in more of an independent role.”

More than 1,300 sophomores and juniors had been nominated by faculties at colleges and universities nationwide this year for a scholarship that was established in 1986 and named after the fiveterm United States Senator from Arizona.

Only four students could be nominated from each school. 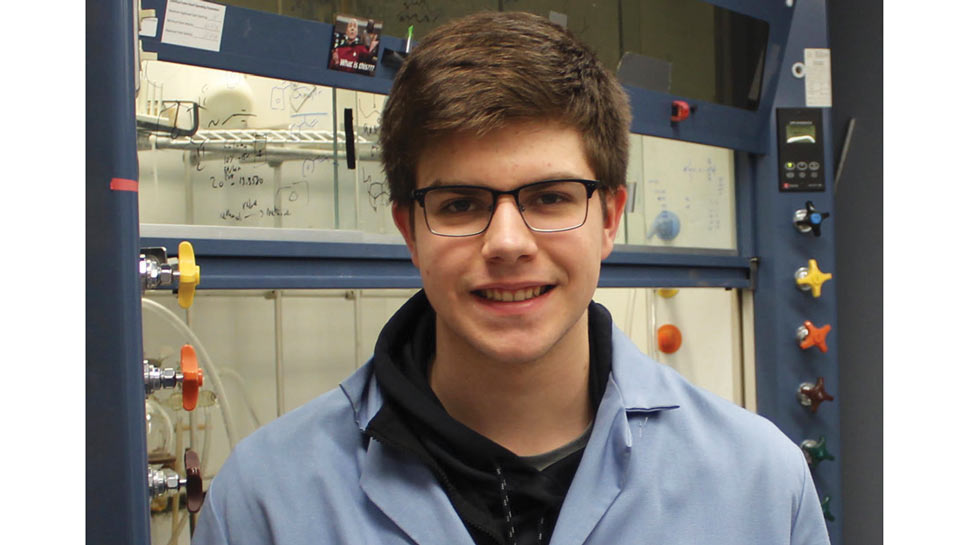 “With the high caliber of our STEM students, just being nominated from Illinois is a big deal,” David Schug, the director of the National and International Scholarships Program at the University of Illinois, said in a statement.

Lyon arrived relatively late to the science game. He enjoyed math and chemistry in his upper-class years at Northridge Prep in Niles, but he was unsure of what to pursue in college. Talks with Dr. Bernoli Baello, a Northridge Prep chemistry teacher, helped Lyon improve his academic forecast from mostly cloudy to mostly clear.

“We talked possible career paths in chemistry, and he gave me a lot of good advice,” Lyon recalls.

It didn’t take Lyon long to flourish in science at the Big Ten school at Urbana-Champaign. Only one University of Illinois sophomore—in a pool of 150 candidates— received the Donald Othmer Academic Excellence Award from the American Institute of Chemical Engineers in 2019, and that was a certain former Knights studentathlete who wielded a 3-wood and shot for a 4.0 report card each semester at Northridge Prep.

Lyon’s research contributions in the lab of chemical engineering professor Huimin Zhao resulted in authorship of a published manuscript. As a junior he researched organic synthesis and transition metal catalysis.

Illinois’ campus reopened in June, allowing Lyon and others with fellowships to work in labs alongside graduate students. Stops at a Fernando’s food truck for tacos with out-of-this-world salsa sated and fueled him. A James Scholar Honors program member, Lyon returned to Lake Forest in early August for a couple of weeks to decompress, briefly.

“GRE test,” Lyon says of the next item on his lengthy Challenges to Slay list. “I’m preparing for that right now.”

Ask him to come up with the names of his top role models and he’ll reveal them before you finish asking the question.

“My mom and dad,” Will says of Ann and George Lyon. “Each has an incredible work ethic.”