The clock behind the bar at Teddy O’Brian’s in Highwood is always 20 minutes, at least, ahead of the real time. “Bar time,” people in the industry call it.

“It’s easier to move people out near closing time when they think it’s later than it is,” co-owner Ted Banick explains. “There’s an easy way for us to tell when our clock’s batteries are low.

It’s time for Banick and Brian Carman, a pair of Mundelein residents and buddies since their Deerfield High School days, to end their impressive 21-year run as co-owners of the inimitable haunt formerly known as Rainbows and sell it. The tavern on Sheridan Road features crowded rows of picture frames—containing photos of sports figures and musicians and a range of other iconic entertainers—on its walls, a dimly lit bar area, live bands on Sundays, and bean bags flying across its spacious patio.

The svelte iteration of Norm, from the television sitcom Cheers, at Teddy O’Brian’s is a huge fan of the game show Jeopardy! He watches it regularly in the afternoon at his favorite watering hole, and, yes, everybody knows his name: Bob. 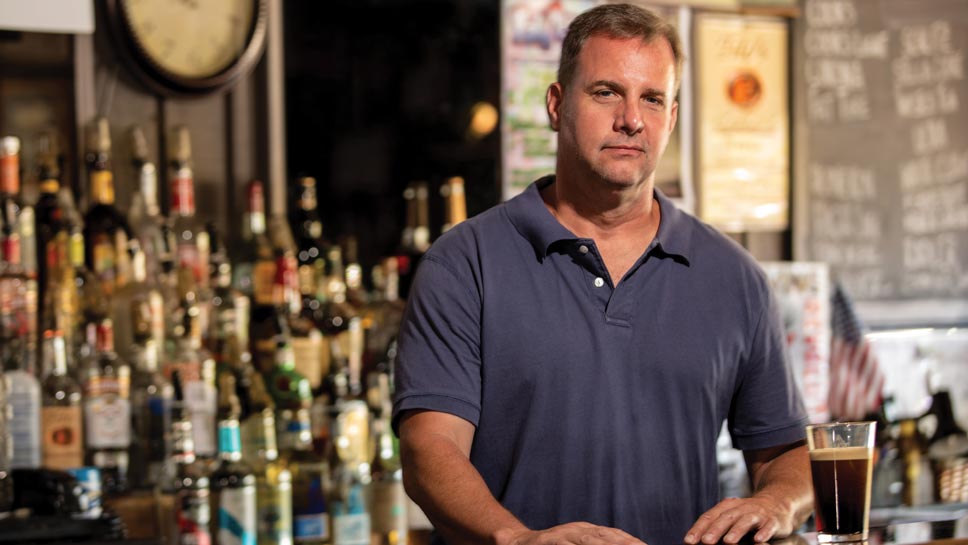 The impetus for Banick and Carman to “last call” themselves as bar bosses was the itch to pivot, mainly.

“Everything’s changing,” Banick says. “The whole world is changing. People are re-evaluating their lives, thinking, ‘How do I want to live, to work, during a time like this?’ Brian and I were young, only 28, when we bought the bar and opened it in late 1999. Maybe young people will buy this from us and put a new spin on it and do it for a long time like we did.

“Our story is a success story,” he adds. “You can’t look at it any other way—two good friends, running a steady business at a spot that isn’t obscure, and living viable lives for two decades. But it’s time to move on, to do something else.”

Marty Jischke, born and raised in Lake Forest, serves as bar manager at Abigail’s in Highland Park. He likes to escape every now and then and absorb life on the other side of a bar at Teddy O’Brian’s.

“When I think of Teddy O’Brian’s I think of the patio and the music, especially the jam band Mr. Blotto,” says Jischke, a three-sport athlete at Lake Forest High School (Class of 1998). I also think of the beer deals and the cheeseburgers, as well as all those great photos on the walls. I love the one of Walter Payton pranking fellow Chicago Bears running back Matt Suhey.” 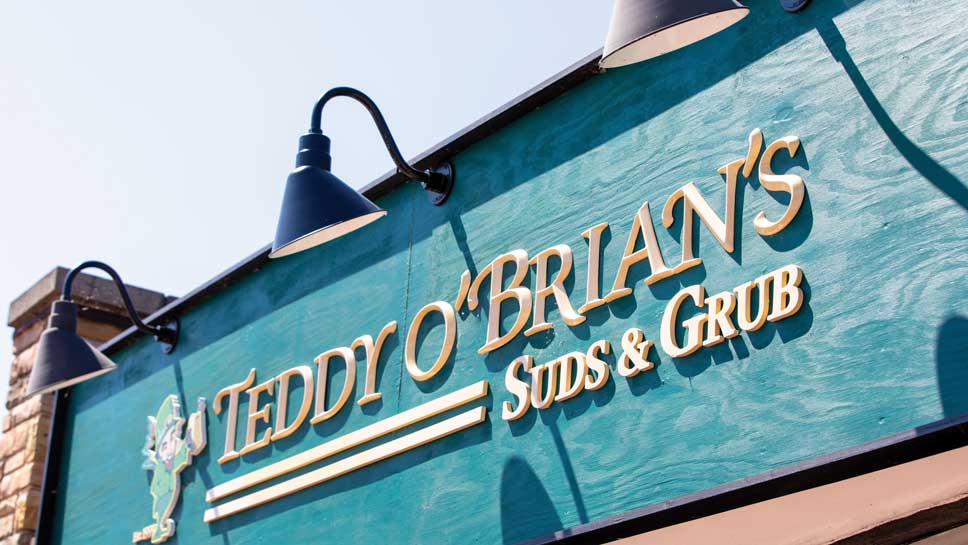 Nobody, to date, has been able to come up with the exact number of walks of life. But plop yourself down from Minute 1 to Closing Time any day of the week at Teddy O’Brian’s and you’d encounter a substantial majority of the walks, hands down.

“If you drive a $500,000 car or ride only a bike, you’d be able to strike up a conversation with anybody in Teddy’s and feel comfortable for as long as you’re in there,” says Eric Verdonk, a former Lake Bluff resident and another LFHS graduate (Class of ’95). “It’s welcoming. It’s comfortable. The people who work there, the people drinking and eating there, they make you feel right at home as soon as you enter.

“It’s been a Highwood staple for so long,” continues Verdonk, who bartended at Teddy O’Brian’s for a summer. “There’s nothing like it, and it’s the ideal spot to reunite with old friends.”

How warm and reliable is the ambience at Teddy O’Brian’s, inside and outside? It’s that thick-ish, slightly faded college sweatshirt you throw on because familiar threads bring out the relaxed you, the real you.

“It’s a down-and-dirty bar that attracts down-to-earth folks,” sums Banick, who, with Carman, opened the restaurant Caboose in Mundelein in 2008 and remodeled it last year, renaming it Teddy O’Brian’s (it serves more food than its namesake in Highwood does). “For years people have associated our Highwood establishment with good live music and our patio, plus we pour a good drink, reasonably priced. Our vibe is what people like; there’s energy, everywhere. It’s a good place to hang.”

With compelling, throw-back images covering nearly every inch of the bar’s walls. They greet, silently, first-time patrons, who typically feed their eyes and stretch their necks near the walls before they about-face and think about dousing their palates. There’s a blackand-white picture of former Boston Celtics great Larry Bird tangling with former Philadelphia 76ers great Julius Erving. There’s a photo of Archie and Edith Bunker, not far from that riveting shot of Michael Jordan, in midflight, re-entering the bottom of the stratosphere during a dunk at Chicago Stadium.

Who hasn’t snickered or blurted “nyuk, nyuk, nyuk” at the sight of Teddy’s framed pic of Stooges Moe, Larry, and Curly?

“I remember when Teddy’s was Rainbows,” Verdonk says. “I love the history of the bar.

Ted and Brian added to the history of the bar with each picture they put up on a wall. One of the greatest feelings is the feeling I have as soon as I walk in. That has a lot do with the personalities of the owners and the bartenders.