“The minds of kids and the potential of kids fascinate me,” says Sichol, who has presented her From an Idea to … book series to students across the nation. “My goal is to inspire future entrepreneurs, to let them know that ideas can change the world. I also tell them, ‘You don’t have to have a lot of money and you don’t have to come from the perfect family to launch an original, highly successful business.’

“Some entrepreneurs struggle,” adds the mother of three with an MBA degree from Dartmouth College’s Tuck School of Business. “But, more often than not, their passion helps them overcome the struggles.”

The late Danish carpenter Ole Kirk Christiansen founded the construction toy company The LEGO Group in 1932. Bottomless passion helped him overcome the destruction, by fire, of the company’s factory.

When flames reduced two subsequent LEGO factories to mounds of embers, Christiansen’s perseverance and resiliency helped the company Phoenix above the ashes.

Sichol—the wife of Adam and the mother of twin daughters/New Trier High School varsity golfers Peyton and Carter and son Tucker—wrote all about Christiansen in From an Idea to LEGO: The Building Bricks Behind the World’s Largest Toy Company.

“My kids have no idea what life was like without Google,” says Sichol, author of From an Idea to Google: How Innovation at Google Change the World.

The precursor to Google was any available reference librarian from 9 a.m. to 9 p.m. Remember those good ol’ days, from the Pleistocene Epoch to 1998?

“Before I decided to write about Google, I felt a generation needed to know the story of the company,” Sichol continues. “How many kids know the names of the college friends (Larry Page and Sergey Brin) who started Google? I was in The Book Stall in Winnetka when I asked a woman there, ‘Does a series of children’s books about business leaders and their uplifting stories exist?’ She told me, ‘You should go home and write it.’”

Her light-bulb moment before forming Idea Tank for Kids last summer reached an incandescent level while she was browsing at the Winnetka Public Library. Sichol had watched episodes of Shark Tank, with her initial reactions ranging from “This is kind of a clever show” to “This is awesome.” People embracing entrepreneurship and experiencing its amusementpark-ride ups and downs shouldn’t be limited to adults, she figured.

Sichol went home, this time to craft a description of her Idea Tank for Kids and email it to friends and neighbors and local business leaders. She needed judges and sponsors and mentors.

“The response,” Sichol says, “was amazing.”

The inaugural Idea Tank for Kids winner was a trio of Skokie fifth-graders, who had re-engineered rollerblades to produce ScootKnees, the original knee skates, and marketed the product to fans of shinny, hockey, and extreme dog riding. The 10-year-olds earned the $1,000 prize.

Chicago Blackhawks owner Rocky Wirtz attended the competition. “You should have seen Rocky Wirtz during the boys’ presentation,” Sichol says. “He was blown away.” 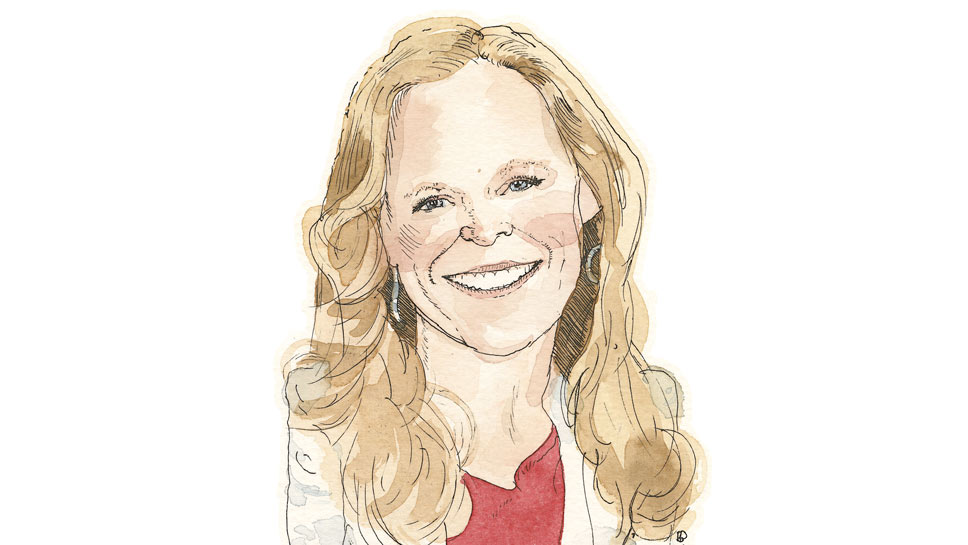 “I remember discussing Kierra’s passion and energy and creativity, as well as the pitches from several of the other finalists, with some of our judges,” Sichol says. “We talked about how well kids are adapting in this pandemic era and how they’re thinking differently. I told the judges, ‘Yeah, this world is going to be okay with bright kids like these in it.’ ”

The daughter of Harvey Bundy, an investment banker, and Blakely Bundy, an early childhood educator and a co-director of Defending the Early Years (DEY), Lowey was a highlight-per-inning star in the realm of softball at Brooks School in North Andover, Massachusetts. The Boston Globe named her an All-Star Most Valuable Player in softball after her senior year, during which she also played basketball and ran for the cross-country team.

Her brothers in arms, from the moment she gloved her very first ground ball to the day she turned in her softball togs at Brooks School?

She continued her softball career at Hamilton College in Clinton, New York, reaching base regularly for the Continentals by ripping line drives up the middle. Lowey met her future husband, Adam, in a dorm at Hamilton.

The Sichol family features nothing but very good golfers these days. The twins’ handicaps are closer to scratch than a four-foot putt is to a hole.

“Competing in sports was a big part of the first half of my life,” says Sichol, who, for nearly 12 years, wrote case studies for professors at business schools, including Tuck, in Hanover, New Hampshire. “Sports toughened me up and served as reminders that you can’t win everything. Okay, so you lose; you can’t fear that outcome. I don’t have a lot of fear. Entrepreneurs are not afraid to fail. I’m a big believer in learning from mistakes. You mess up? You embrace mistakes.

“That’s what great entrepreneurs do,” she adds.

But not all forms of recognition hang in frames on walls or rest on mantels. Sichol has been showered with words of praise, too.

“A parent told me his child had never wanted to stand in front of a class to speak or to do a math problem on a chalkboard before his child made an Idea Tank for Kids pitch,” Sichol says. “The parent said, ‘Your competition brought out this person I didn’t know existed.’ ”