A month before Zack Ignoffo was invited to audition for the Food Network’s reality television show, Worst Cooks in America, his dad asked for his help to make dinner. Ignoffo promptly sliced a tendon in his hand while dicing vegetables, an injury that required minor surgery. He had recently turned down a chance to appear on The Bachelor when the production company inquired about his cooking skills, or lack thereof.

“They offered me a spot on The Bachelor and I told them I didn’t want to go on a show like that so they asked, ‘Are you a bad cook by any chance because we have this other show going on, Worst Cooks,'” Ignoffo says. “Ironically, I had just cut my hand the month before and I said, ‘Funny enough, I’ve got a great story for you about how bad’.'”

Ignoffo grew up in Highland Park (Highland Park High School, Class of 2011) and attended the Kelley School of Business at Indiana University. He’s an adventurer, having already visited more than 50 countries before his 28th birthday, and, after becoming fluent in Mandarin, worked in Shanghai as a cybersecurity consultant for two years before returning to the states.

Ignoffo’s time in China expanded his culinary horizons, so to speak, which in part fed his motivation to become a contestant on Worst Cooks.

“I was a great candidate because I never really learned to cook but I’ve eaten everything,” he says “Living in China you taste the rainbow. There are very few things I haven’t tried or wouldn’t try but it just didn’t translate to the hands, to making it.”

The 20th season of Worst Cooks, which was filmed in New York and airs on Sunday nights at 8 p.m. Chicago time on the Food Network, started on June 21 with 14 contestants, including Ignoffo. He says the experience learning alongside his fellow contestants, which include a former NFL football player, a psychic, and others from a variety of professional backgrounds, was rewarding. 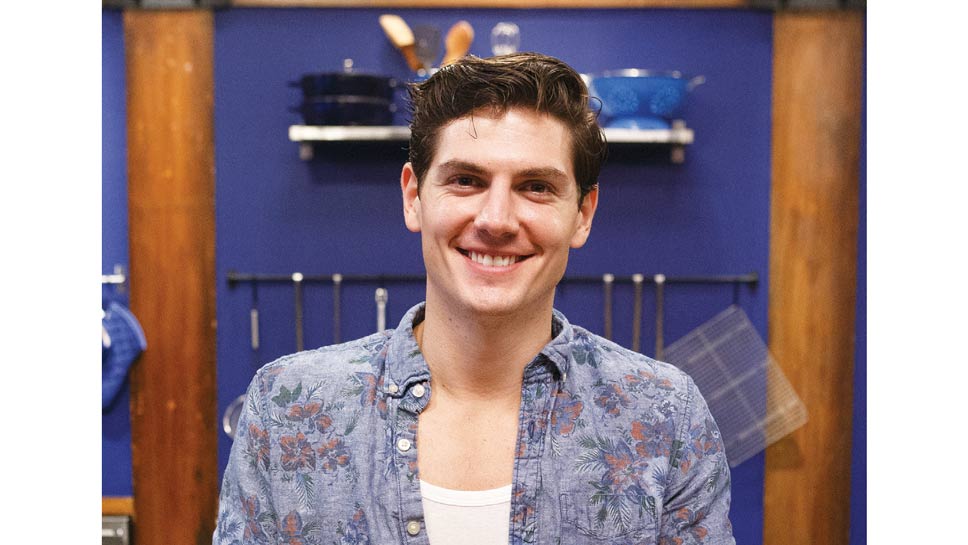 “It’s been amazing. You walk in and everyone considers it to be a competition because we’re trying to win $25,000 but you are jam packed with each other,” he says. “You don’t have your cell phone and you can’t connect with the outside world to get recipes or whatever, so you get really close. There was an ex-NFL Super Bowl Champion and social media influencers and reality television veterans and here I was just this goofy kid from Chicago.”

Despite his outsider status, Ignoffo has managed to survive in the competition from week to week and is now one of four contestants left with three episodes to go. He’s won two of the weekly episodes, most recently with his version of a Chicago sausage sandwich.

“It’s an unreal feeling but very backhanded because you’re kind of the best of the worst,” he says. “You want to walk out of there with a feeling that you’re high and mighty, but the problem is you’re extremely average.”

As for his sausage sandwich that won the chef judges over, Ignoffo says he relied on his Chicago instincts.

“We made it from scratch, took the pork shoulder and the other ingredients but I took it to another notch and added the giardiniera in there and the other stuff that comes on the classic Portillo’s dog,” he says. “I just followed my heart on that one. My ancestors were calling me, and I saw the smoke signals in the distance.”

While the results of Worst Cooks won’t be revealed for a few more weeks, Ignoffo is not too worried just yet about television stardom going to his head. He has yet to be recognized by strangers in the street.

“I went to Starbucks yesterday and a guy stopped me and said, ‘Can I just say something to you,'” he says. “I thought, ‘Oh here we go’ and he said, ‘I love your shirt.'”

Though he’s already accomplished a lot at the age of 27, Ignoffo, who also keeps a side hustle performing comedy, keeps his feet firmly planted on the ground. Just ask his mom.

“He’s always learning and he’s always trying to better himself and figure out the next thing he can do to use the things he’s learned,” Lisa Ignoffo says. “Whether it’s acting, writing, or working.”