Every day, as late afternoon drifts into evening, Ramsey Lewis’s wife, Janet Tamillow, brings him a glass of wine. It’s the signal that his workday is over. It’s time for dinner.

Lewis, the Chicago-based jazz, classical pianist and Ravinia favorite, has won enough awards— including three Grammys—to cement his legacy as one of the best of his generation. Though he retired from performing three years ago (air travel was wearing on him) he still spends his days with what he calls his muse and, next to his wife, his best friend: His Steinway piano.

When the COVID-19 pandemic made its presence felt, many industries were forced to adapt to a “new normal.” Offices were closed, restaurants shuttered, and music venues—opera houses, concert halls, rock clubs—went silent. The lingering economic effects of these closings won’t be known for a while, but musical artists who’ve had their work and careers turned upside down are finding creative ways to press forward.

While Lewis hadn’t performed live for a few years, the shutdown offered an opportunity for him to share his craft with a wider audience. Lewis began to offer live streaming concerts from his condominium in downtown Chicago on the fourth Saturday of each month and has garnered audiences of up to 600 people from countries as far away as Japan and Australia.

“It’s about getting lost in the music and, you know, you’re just sort of in that mode and it doesn’t necessarily matter that the audience is in the room,” Lewis says. “The audience can be anywhere.”

Lewis was born in Chicago and began playing piano at the age of 4, following in the footsteps of his sister, whom he envied. He almost gave it up because of the commitment to practice, but eventually he fell in love with playing and branched out to different genres, from jazz to classical to pop.

Lewis recognizes the irony in the shutdown of live venues offering opportunities for artists to reach out to and develop new audiences.

“I just love the idea of sitting down at the piano and being able to share my music with people who would’ve never been able to hear it,” Lewis says.

Marta Aznavoorian is one-third of the wellknown classical trio, The Lincoln Trio, which plays annually at Ravinia and other festivals and venues throughout the country and the world. With the trio’s performance schedule being postponed or cancelled due to the coronavirus pandemic, Aznavoorian, an award-winning classical pianist and music professor at DePaul University, has beefed up her ability to provide private lessons to potential new students.

“You can’t have musicians flying from across the country if there isn’t going to be an audience for them. They won’t be able to pay us if there aren’t people coming to fill the hall,” Aznavoorian says. “So, it was actually a bit interesting to see what musicians were going to do to bring music to people.”

Aznavoorian reconfigured her website, martaaznavoorian.com, to feature her one-on-one lessons for students and began replacing what would have been time on the road performing with The Lincoln Trio and other projects with teaching.

“All of a sudden it dawned on me what I love.

You know I’ve got my studio and that’s a way of making money right now and I love it,” she says. “I just thought I’m going to open my time up now that I’m not traveling and I’m just going to teach.”

Virtual teaching has forced Aznavoorian to make some adjustments, however, as teaching remotely poses a different set of challenges when compared to teaching in-person.

“I can’t physically show someone the weight of their arm or hand, and I can’t touch anybody and with the piano there is a lot of touch and feel with the demonstration so that is eliminated,” she says. “But with my younger students, it’s more of a verbal lesson anyway. I have cameras set up and I bought a new microphone, so it enhances the sound.”

Aznavoorian says that, particularly with her college students who are used to using computers and technology, they are comfortable with learning remotely and find quality in their learning sessions.

“They’re doing their online studies for their school, so they seem quite comfortable with my teaching as well,” she says. “I definitely have to be very precise and articulate. Rambling doesn’t work well on a computer because I feel sometimes with students their eyes kind of glaze over.”

With more people staying at home, Aznavoorian has seen an uptick in interest from parents and individuals who have more time on their hands and want to rekindle a dormant interest in piano. 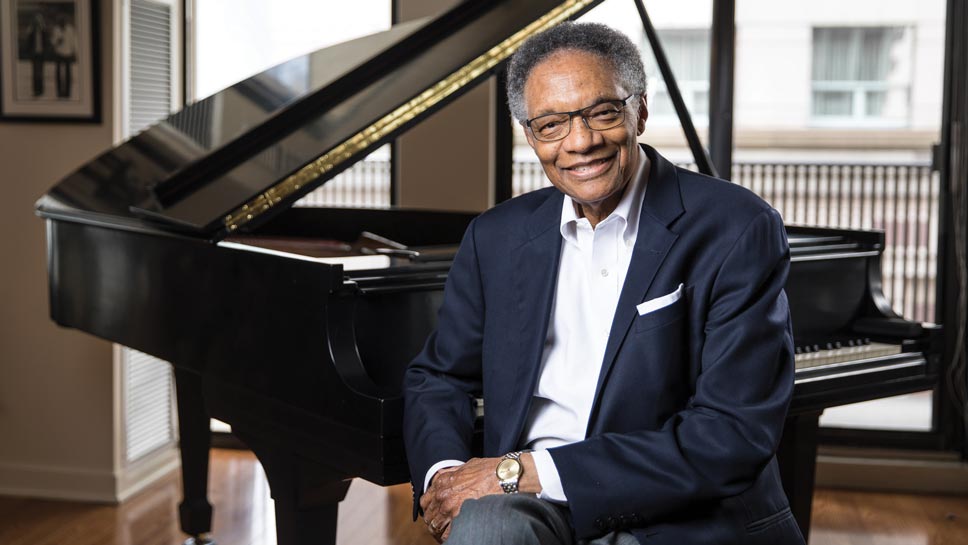 Ravinia favorite and three-time Grammy winner Ramsey Lewis speaks about the impact of the recent pandemic on his performance career.

“I’ve noticed families interested in taking music, and adults for that matter, because they have more time on their hands. They’re spending more time at home,” Aznavoorian says. “They’re focused on developing a craft or an art. There’s a little market there, a push for families who want their kids to amp up their music lessons, maybe two lessons a week instead of one. I’ve got a lot of adult students contacting me who’ve wanted to take piano and develop their skills.”

For other musicians whose primary source of income is touring, these remain uncertain times. 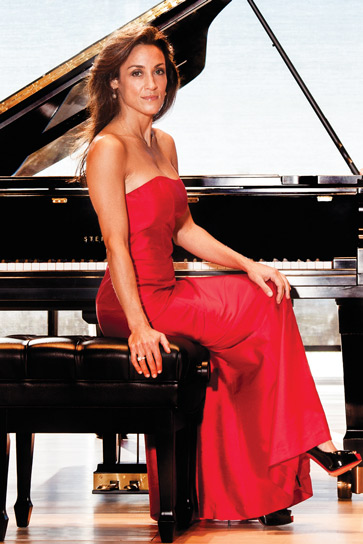 Marta Aznavoorian, member of The Lincoln Trio, is teaching online to supplement the income lost from not being able to perform.

Phillipe Quint is a world-renowned Russian-American violinist who has played in concert halls throughout the world. Travelling more than 200 days a year to earn a living as a freelance musician, Quint’s career came to a screeching halt when the virus hit and he’s in the process of figuring out how to adapt.

“I don’t even know where to start. I still think I’m in complete shock,” Quint says. “I’m still trying to figure out how to move forward and what to do.” 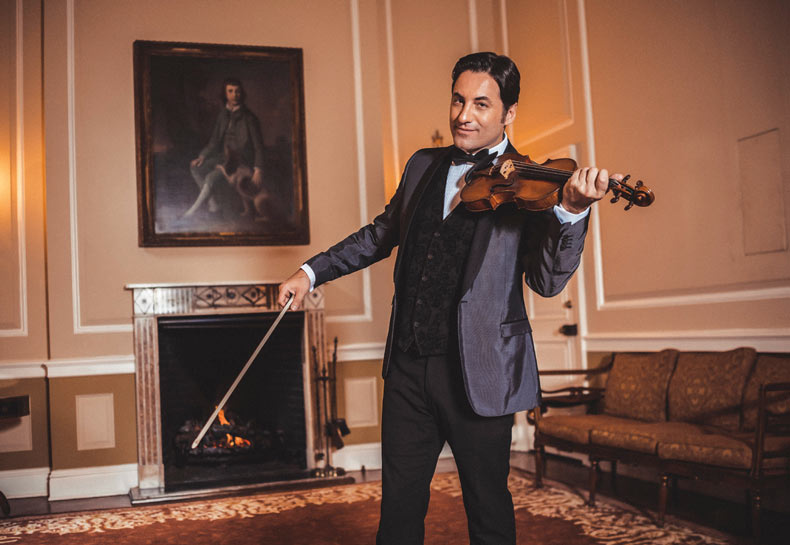 Phillippe Quint, a world-renowned Russian violinist, is reinventing himself for a brave new virtual audience.

Quint often teaches classes and seminars while performing on the road, but he does not have an affiliation with a university and the fallback option to develop or expand an educational practice.

“Despite the fact that I’m represented by multiple agencies around the world I’m considered to be a freelance artist so that’s my official status,” he says. “In terms of government help (during COVID-19) we’re at the bottom of the priorities list.”

Quint is considering offering virtual concerts or playing venues where social distancing can be practiced but he says what’s really needed is for those who appreciate the arts to step up and support the arts community.

“Right now is the time to try to re-educate people. Sure, music is beautiful and most artists, we really love what we do. But we have to get paid, especially right now when there are no other means to survive,” he says. “And it’s important that people know, whether it’s through virtual concerts or some other way, they need to support the arts and the artists as much as possible.”

Perhaps no one understands the impact of the pandemic on the arts community as much as Welz Kauffman, the outgoing CEO of Ravinia. Kauffman and the board and staff of Ravinia were forced to cancel the 2020 summer season due to the shutdown. Kauffman says the long-term effects on the arts economy are yet to be known, but some signs are emerging.

“Certainly, the massive response we’ve seen from arts groups to put their work online is, I believe, a great avenue for creating new audiences,” Kauffman says. “While there are those who fear that online experiences will replace the live show, I’m a firm believer that a taste of something will encourage folks to try the real thing once it is safe and secure to do so.”

Kauffman says that the communal aspect of sharing a great show with others can never be exceeded by a virtual show, but that Ravinia is experimenting with a variety of virtual programming designed to tap its archive of artistic and educational programming. And he remains both realistic and optimistic about the future.

“The fear that the cancellation of performances due to COVID-19 will harm some performing arts institutions, perhaps to the point of elimination, is very real,” says Kauffman. “It is also true that artists are coming up with ways of doing live performances, respecting social distancing on stage and in the house, and this could be more than just a stopgap while we wait for a vaccine— it could very well result in brand new works that enter the standard repertory of dance companies, music ensembles, and theater troupes.”