You don’t meet many people who engage both sides of their brain—who write poetry, perform stand-up comedy, create a business, and collect cars all in the same life.

Paul Burt was one of them.

I knew Paul for about 15 years. Though our daughters were friends at a young age, I think we actually met at one of the extravagant Christmas parties his wife Janet and he hosted. In both their house off of Ridge Road and then on Lake Road in Lake Forest, these were memorable affairs: Carolers greeting you at the doorway, a feast waiting inside, revelers in every room, a Christmas movie playing in their theater-style basement room.

Hudson, Janet, Paul, and Sophia Burt are shown in the majestic entryway on their 1908 Lake Forest home. PHOTOGRAPHY BY APRIL GRAVES 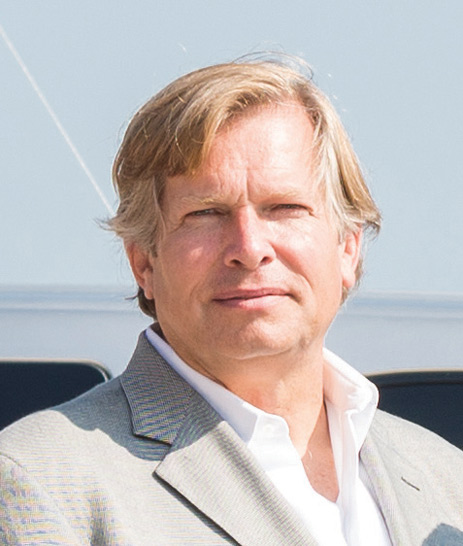 In keeping with this theme of oversized celebrations, I remember going to a party for hundreds in a West Lake Forest warehouse to look over Paul’s collection of cars, motorcycles, and more. As Autoweek explained in an article, “The diversity is staggering: One 1977 Smith Mini biplane, some assembly required. Five classic boats. Fifteen Corvettes in various stages of restoration. No, make that 14 Corvettes and one 1978 Corvette Caballista. A Caballista!”

At times years would pass before we’d see each other, but whenever I wrote a book, he immediately reached out. No one bought more books from me to give to his clients in the human resources benefits business than Paul.

Our last meeting took place at Dunkin’ Donuts in Lake Forest this past October, when Paul wanted me to take a look at a manuscript of poetry he had written called Virgo After Cancer. One poem dealt with his daughter Sophia, who was diagnosed with heart disease only 30 days after she was born. She had open-heart surgery at age 6. He was going to self-publish the book and give all of the proceeds to fight cancer.

We chatted that morning for perhaps an hour. He loved to share stories about being a comedian in New York in his 20s. At Dunkin’, he told me how had offended Jackie Mason in a deli with one of his jokes.

Before our final meeting there, I had no idea he had been battling Stage 4 cancer. He had gained weight since the worst of it, so to me, he looked almost the way he always had. He talked openly about his faith, which I admired greatly. With others, he had noted how it was possible to beat the devil with faith and prayer.

Earlier this year, Paul invited me to a gathering to chat about my most recent book. We settled on a date, but then he never responded to my last e-mail to him. Obviously, the scourge of cancer was taking him away from the Earth for good.

Though I didn’t know Paul nearly as well as most, I know his life left a mark on so many. My prayers go out to his loving family.

David A. F. Sweet is the founding executive editor of The North Shore Weekend.