Newspaper articles about politics and world news bored Richard H. Driehaus in the 1950s. Sports pages did not hold the teen’s attention, either.

But reading all those tiny numbers and pluses and minuses and names of companies in the business section? The ritual fascinated him, energized him, and … stained him. Each inky smudge on his hands was a small price to pay for consuming information.

Driehaus was an avid New York Stock Exchange fan at an age (15) when most boys couldn’t wait to clutch a car’s steering wheel for the first time or go on that first date. How another New York institution, the Yankees, had fared on a diamond the previous day meant nothing to the Chicago Southwest Sider who’d launch the boutique investment firm Driehaus Capital Management in 1982.

“I wasn’t a good student, and I didn’t have my father’s skill set,” the affable, ever-positive Driehaus, now 77, says of Herman Driehaus, a mechanical engineer whose name was attached to no fewer than 24 patents. “I also knew I wouldn’t be an author or a singer or an athlete. Those New York Stock Exchange numbers alerted me. I was very aware and found out knowledge is vastly different than understanding.

“I was a good observer.”

Driehaus watched his savings grow to $2,000 and opted to spend exactly half of it to buy 20 shares in the equipment and electronics company Sperry Rand in 1957. But only after the St. Ignatius College Prep sophomore had worn out a chair regularly in a Chicago Public Library while poring over business sections and columns in newspapers, as well as business magazines. Heeding invaluable advice—”Investigate before you invest”—from his mother, Margaret, nudged him to take up space in a library for long stretches of his free time.

A sustained curiosity in business trends, along with devising sound investment strategies and approaches, vitalized Driehaus from there. A genuine commitment to philanthropy arose. Profound generosity blossomed.

Today his Chicago-based firm manages approximately $8.4 billion in growth-oriented equity and alternative investment strategies for institutional and individual clients. The foundation’s builder owns a Jupiter-sized heart, having granted more than $200 million to entities that enhance arts and culture, or support the built environment (the Chicago Bungalow Association, for example), or spur economic opportunity. From kid investor to adult humanitarian. From so-so student to so-kind benefactor. Driehaus recognized his passion at a young age and put on a pair of blinders shortly thereafter. He’s been racing at a Secretariatat-the-Belmont-Stakes clip around investment and altruism tracks ever since.

“I see things and I react,” Driehaus says, a la a slugger uttering “See ball, hit ball” after a three-homer game.

TCBY (“The Country’s Best Yogurt”) opened its first frozen yogurt store in Little Rock, Arkansas, in 1981, when it was known as “This Can’t Be Yogurt.” Driehaus invested wisely during the company’s infancy.

“I believe you make the most money by hitting home runs, not just a lot of singles,” Driehaus told a group of investment professionals representing a wide variety of industry classifications and titles at an event in 2017.

His connection with TCBY hit his bat’s sweet spot and left the yard in a New York millisecond. Among Driehaus’ other prodigious shots: Houston Oil & Minerals in the mid-1970s; MCI and Home Depot after the ’87 crash; Home Shopping Network and Blockbuster Video in the late ’80s; U.S. Surgical in the early ’90s; and Ascend Communications, Q Logic, and Emulex in the late ’90s.

“Don’t over-diversify just for the sake of diversification,” Driehaus later advised his audience. “Look for companies in favored sectors with strong market positions and an improving fundamental outlook. You’re better off with a good house in a growing neighborhood.” In 2000 Barron’s named Driehaus to its “All-Century” team of most influential individuals in the mutual fund industry. Only 24 others received the honor. 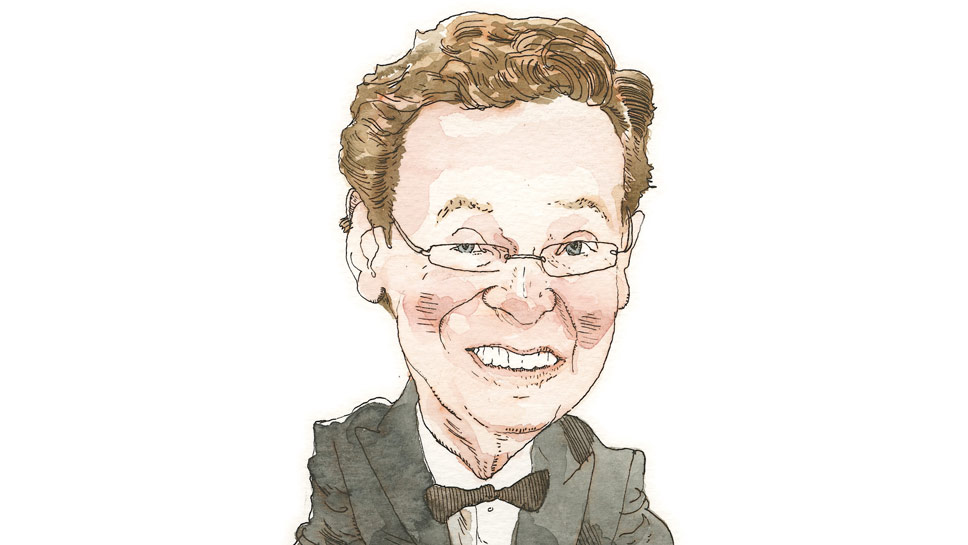 The selection humbled Driehaus. It also stunned nobody.

Architecture stirs Driehaus, who earned an MBA at DePaul University. He restored the 1883 Samuel M. Nickerson House in Chicago after buying it in 2003; the Chicago Landmark now stands as the Richard H. Driehaus Museum, home to Art Nouveau decorative arts and other striking pieces at 40 East Erie Street.

An architect has received a $200,000 Richard H. Driehaus Prize every year since 2003. Presented by the University of Notre Dame School of Architecture, the global award honors a major contributor for achievement in the art of traditional and classical architecture.

Driehaus, who grew up in the Irish-Catholic neighborhood Brainerd and attended Chicago’s St. Margaret of Scotland School and School Sisters of Notre Dame, has entered the gorgeous grounds of Ravinia Festival several times and found each concert highly entertaining. His summer home—a 1906 Georgian-style estate built by Norman W. Harris—is located in Lake Geneva, Wisconsin, a popular, not-too-far getaway spot for a wealth of North Shore residents. He travels to the property up to eight times a year.

“Nice place for an escape,” Driehaus says. “I like being near the water. It’s sort of in the woods, and it’s in a small community.”

Collecting cars revs Driehaus’ adrenaline, too, an avocation he started in 1992. Only five 1933 Pierce-Arrow Silver Arrow vehicles were ever built, with one drawing a slew of skidding gawkers at the 1933-34 Chicago World’s Fair. Three such cars exist today; Driehaus owns one. It idles No. 1 on his Favorite Rides list, a front bumper or so in front of his No. 2, a 1941 Chrysler Thunderbolt.

“I look for American cars of timeless design from all eras,” Driehaus says. “Also pre-war coachbuilt, concept or ‘idea’ cars by American manufacturers or stylists. I am fascinated by their incredible design and how they reflect their respective eras.”

Flash back decades ago. A bus begins transporting Driehaus from Ashland Street to St. Ignatius College Prep, located at 1076 Roosevelt Road. He’ll sit and bob for 10 miles, giving him plenty of time to complete homework. Or make new friends.

Or tattoo his fingers with newsprint