While we await hard data about the long-term impact of COVID-19 on the real estate market, an informal survey of Realtors™ on the North Shore reveals the market is not only alive and well—it’s thriving.

According to local agents and brokers, a number of factors is driving an uptick of interest in North Shore homes from families currently residing in Chicago. These factors include the need for office space if work-at-home becomes a more permanent fixture of corporate life, and concerns about continued spread of the virus in more densely populated neighborhoods.

“Things are still moving and the market might be even better than before COVID-19,” says Luke Mutter, a broker with Berkshire Hathaway HomeServices in Lake Forest. “I’m seeing more activity now than back in 2007.”

One of the recent phenomena driving increased demand for North Shore homes is simple: When the whole family is home at once, for months on end, the need for more space in undeniable.

“What today’s suburban buyer is after is abasement or an extra bedroom for an office to work properly from home,” Mutter says. “What I’m hearing from the corporate side is that instead of paying a car allowance or a gym allowance that maybe they pay employees an extra $1,000 per month to offset the mortgage to get a bigger home with that fifth bedroom.”

In addition to changes in how we might work post-pandemic, Mutter says possible long-term social distancing requirements also could play a role in demand for less densely populated areas like the North Shore.

As for some of the urban amenities that draw and keep people in Chicago, Mutter continues to be an advocate for local restaurants and other businesses in Lake Forest that help maintain a hometown feel.

“If you live in the suburbs and want to maintain your home price, make sure you’re buying books from the local bookstore and buying bicycles from Kiddles instead of trek.com,” Mutter says. “Who wants to buy a four-bedroom colonial in a dormitory town with no restaurants or shops?”

While many real estate professionals on the North Shore saw a slowdown in transactions during the economic shutdown, most say it was due to the practical issues of stay-at-home orders and offices being closed rather than any movements in the markets.

“A lot of our listings have gone under contract and some have had multiple offers,” says Gloria Matlin of the Matlin Group, a Compass broker based in Wilmette. “Houses that were sitting and sitting on the market are now selling and that’s a result of people being able to get out and about.”

In addition to clients wanting to leave the city, Matlin says that there’s also a desire for families, both young and old, that have moved away from the North Shore to move back during uncertain times.

Matlin says uncertainty around COVID-19 and a possible second wave has created an urgency in the market that is making want to get clients settled as quickly as possible.

“That’s why we’ve seen a surge in the last two months,” Matlin says. “There’s this opportunity that they might not see again.”

Anne Malone, an agent with the Winnetka office of the Dawn McKenna Real Estate Group, says the COVID-19 shutdown has made many families rethink their current living situations and look at alternative options.

“It’s been kind of a double punch with the COVID-19 and living in the city, where there are wonderful factors but there are drawbacks—especially if you’re cooped up with your two kids in your two-bedroom apartment and the amenities in your building are no longer accessible,” Malone says. “Suddenly a house in the suburbs with a backyard and access to the beach and all other kinds of amenities seems like a really nice switch.”

Malone mentions one client with a single-family Greystone in the city who thought they would be in the city for the long haul but the past few months have convinced them that they wanted more space and it just felt right to be in the suburbs.

“I feel like there’s probably a long-lasting trend that people no longer want to stay in the city and that the city is not as attractive as they once thought it was,” says Malone.

As an example of how business has evolved and adapted during the pandemic, Malone cites a client from Switzerland who purchased a $1.2 million home on the North Shore without ever physically seeing the property.

“We looked at a lot of different homes online, but they zeroed in on this one home and we FaceTimed and they loved it and bought,” she says. “This was right at the height of the virus.”

Jena Radnay, a broker with @properties based in Winnetka, says what we’re seeing now in the market with a bump in real estate transactions is a predictable outcome of the shutdown.

“In March when this whole thing went down, everyone was gearing up and the market froze,” Radnay says. “It didn’t decline as far as value. It didn’t bust. It just froze.” 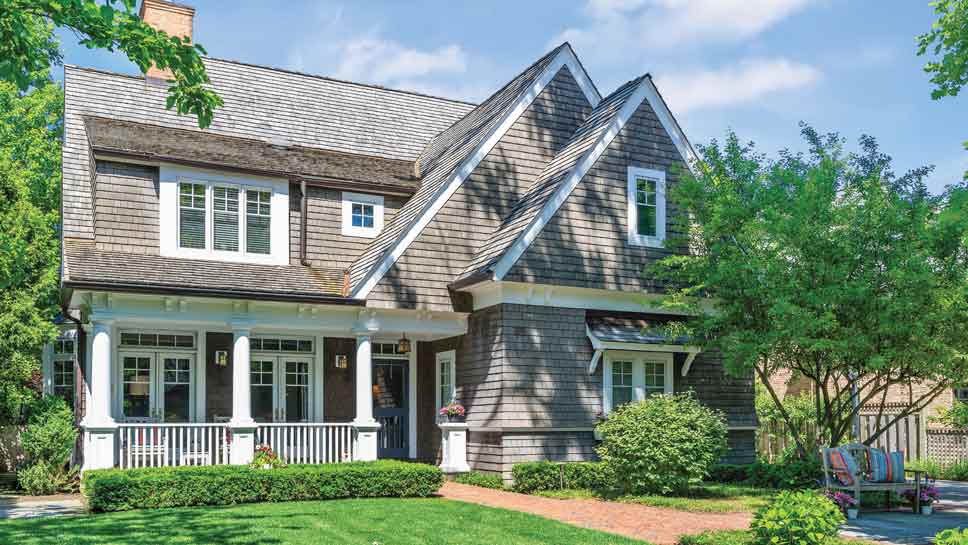 With a front porch and gorgeous outdoor space, this Nantucket home at 325 Richmond Road in Kenilworth, offered by Jena Radnay with @properties, is just what today’s young buyers are looking for.

Radnay says the pandemic might have pushed some city dwellers to speed up a move to the suburbs that they would have eventually made anyway.

“What happened was if anyone was on the edge of leaving the city, the COVID-19 helped them get over the hump,” says Radnay.

“It’s actually kind of changing. It’s a seller’s market because we don’t have enough inventory, we don’t have enough product for demand,” Radnay says. “We have sellers getting into the market and I have multiple bids on properties in great locations close to the lake and to trains and schools. It’s a nice seller’s market right now which is a big departure from what we’ve had.” 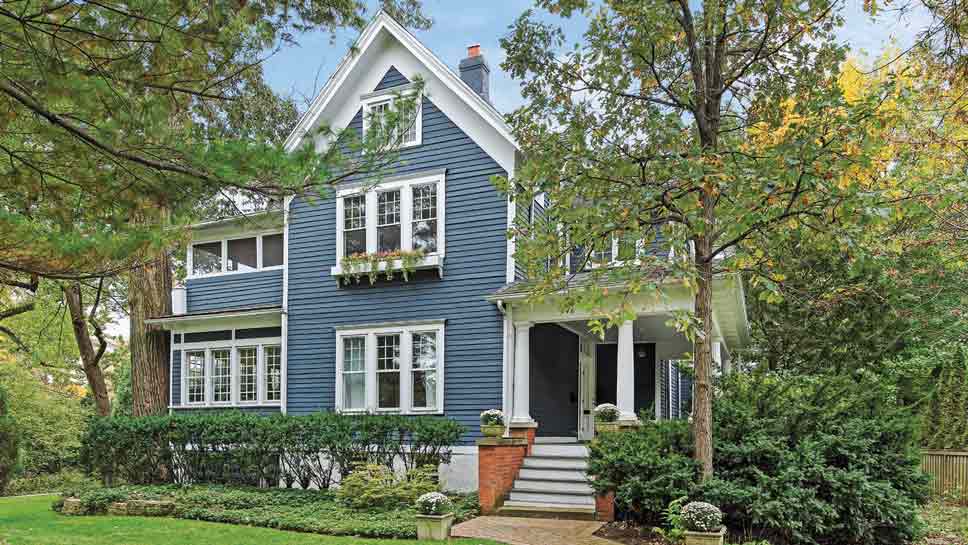 After being stuck in the city during the pandemic, many urban families now seek a suburban oasis such as this beautifully landscaped property with seasonal lake views at 546 Elm in East Winnetka, offered by Anne Malone of Engel & Volkers, Chicago.

Ted Pickus, a broker with @properties in Highland Park, says he’s seeing an uptick in millennials who are ready to make their suburban move away from the city earlier than they may have expected.

“I have five new clients that fit this mold. They said, ‘We were thinking we were going to move to the suburbs in a couple of years but now we want to move now,'” Pickus says. “They packed up and came out here after being locked in for a month. They want space, and I feel that’s really what is driving the suburban market right now.” 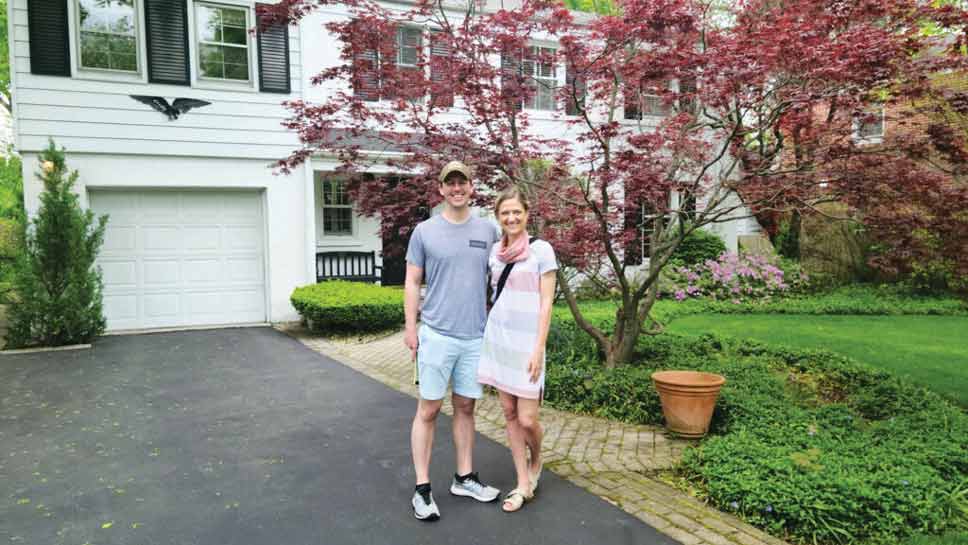 These newlyweds were living in Chicago with two rescue dogs but after being in the city during the recent stay-at-home order have accelerated their timetable to move to the North Shore.

Pickus adds that for work-at-home parents of young children, the idea of having more space is one of the appealing aspects of the North Shore.

“You know in Chicago and the Midwest it only applies to a certain time of year but it’s the idea of having outdoor space where the kids can go run around and you don’t have to worry about them and you can have some privacy and do your Zoom calls,” he says.

Low interest rates continue to be a motivator for buyers, and the uncertainty of the upcoming election and what may continue to happen with the economy is a factor in how swiftly buyers may be looking to lock in a purchase.

“When the stay-in-place order was issued, the future pace of our traditional North Shore spring market was unknown to all of us. Now, however, the market is active and strong, with some houses sold in one day and numerous multiple-offer scenarios,” says Louise Eichelberger, a broker with @properties in Winnetka. “By September we could see the gap closed between this year and last year’s home sales. Families are accelerating their future plans to be move-now plans. And these low interest rates are a great incentive to buy the long-term house now.”

As with many other brokers and realtors, Laura Fitzpatrick, a senior broker with @properties in Wilmette, continued to do business as usual during the COVID-19 spread and, other than the practical implication of completing transactions, didn’t see a dip in the market.

“My experience with the market during the shutdown was that I didn’t see any slowdown in my own business,” Fitzpatrick says. “I had clients that were taking advantage of great opportunities, including some who were on the fence and decided to purchase a home.”

Fitzpatrick says that, oddly enough, the shutdown might have given people the time to think about their futures and their living situations and if they needed a different environment.

“People did have time on their hands and when they weren’t working, they were online checking websites. I saw an increase in my traffic online for my property listings and people seemed to be more focused,” says Fitzpatrick. “People who were curious about real estate were definitely looking and thinking about their forever home and taking the next step.”

As the market shifts in favor of sellers, brokers say that doesn’t necessarily have a significant impact on how homes should be priced. Not just yet.

“Everyone, when they sell their house, if they have their house appraised, they’re going to use comps from the last 12 months and it’s going to take a while for the appraisals to reflect that,” Ted Pickus says. “It’s not going to happen overnight.”

Also, what hasn’t changed is what today’s buyers are looking for. With few exceptions, they are not interested in fixer uppers.

“If you look at all the homes that have been on the market and have been there for a long time, the homeowners have had ambitious pricing,” Mutter says. “The homeowners will say, ‘This bathroom has been fine for 30 years and I don’t understand why someone can’t make an offer and just change it out.’ You might as well just not sell the house.”

While the trend now seems to be a migration from city to suburbia, Radnay says this isn’t a form of competition between the two, and once we emerge from the economic shutdown, all markets will thrive.

“The city market by any means has not fallen apart,” she says. “I work for @properties and we’re number one in Chicago, and I’ll tell you right now I’m talking to all of my peers in the city and they’re doing just fine.”