Boy Scout Will Gutrich could have proposed to build a footbridge at a park for his Eagle Scout Service Project last October. Or a shaded pavilion for a school playground. The Wilmette Troop 3 member also could have mulled clearing and mulching a trail along a forest preserve.

Gutrich, 14 years old and a New Trier Township High School freshman at the time, instead came up with an Eagle project that made adults— moments after hearing about it—smile hard and cry small lakes.

The only child of breast cancer survivor and lifelong Wilmette resident Sheila Gutrich plans to sew post-mastectomy shirts for local survivors and then donate them to The Licorice Project for his 2020 Eagle project.

The Licorice Project is a welcoming community for breast cancer patients and survivors. It’s dedicated to empowering and embracing women during every stage of the breast cancer journey. 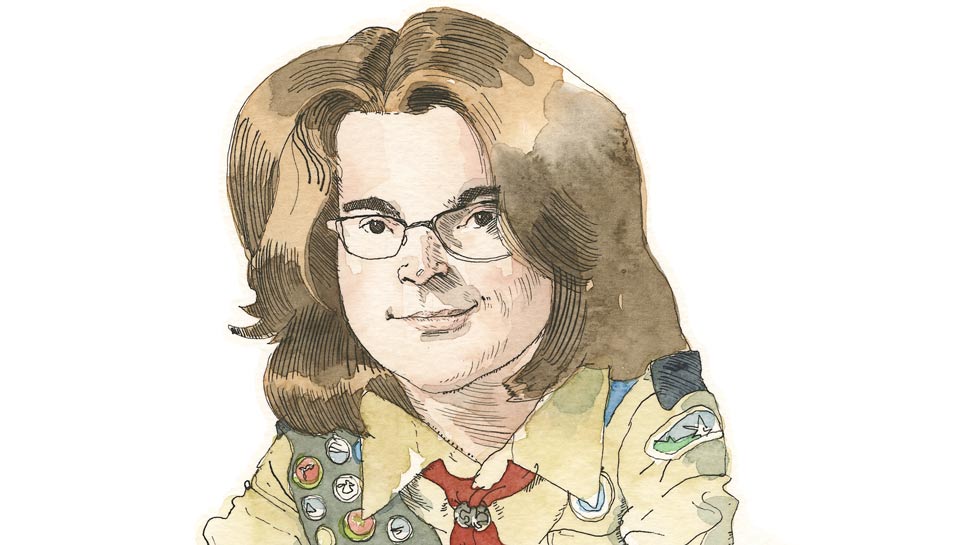 Will Gutrich ILLUSTRATION BY BARRY BLITT

“My son was looking on a website one day and noticed a mastectomy shirt cost $85,” says Sheila, who was diagnosed with breast cancer in early 2017 and, post-surgery, wore the adaptive piece of clothing featuring a shirt pocket doubling as a Velcro-closing pouch for a drain holder. “He looked at me and told me, ‘Mom, I can make those.’ ”

One slight hurdle: Will Gutrich knows as much about sewing as a grizzled football coach knows about the Triple Peel maneuver in croquet. But the Eagle Scout candidate plans to soar above that obstacle in August by taking a crash course in sewing— taught by owner Karen Graham—at Sew on Central in Evanston. Among Gutrich’s other stitch partners in the project is stepsister Madeleine Berger-Holzman, a fashion designer from Boulder, Colorado.

All shirt patterns (sizes medium and large) should be cut out by August, with distribution set to begin in September. The bulk of the beneficiaries will start wearing the mastectomy shirts in October, Breast Cancer Awareness Month. Used ones will get washed and land in the hands of the good folks at The Licorice Project.

“Three years ago my mom wore the shirts,” Will, now 15 and a rising sophomore at NTHS, says. “I thought of her when I thought about my proposed Eagle project. My mom has been a major influence in my life. She’s caring, honest, expressive, always there to look after me. She taught me to be kind. And she’s a very nice person in general.”

Gutrich’s path to getting an Eagle project approved began with a rejection. He originally wanted to make receptacles for doggie do-do and deploy them at various spots in Wilmette. His Troop Master swatted that idea, prompting Gutrich’s sweet pivot to providing useful threads to cancer survivors and thrivers and The Licorice Project (TLP), based in Wilmette and launched by sisters Katie Clarke and Kendra Olvany in 2012.

Clarke received her diagnosis in 2011 at age 45, gulped hard, and crushed chemo and months of Herceptin treatments. Older sis Olvany dubs herself a “quarterback” and “cheerleader,” helping TLP breast cancer patients eingineer their drives to recovery and rah-rah-ing for them until her voice gallops to full-blown hoarseness.

There must be a fun story behind the “Licorice” in The Licorice Project. There is. The sisters hit the pavement for a breast cancer awareness walk in San Diego years before Clark’s diagnosis. Walkers received small treats from supporters along sidewalks. Kendra and Katie then handed out licorice at a Chicago walk the following year. The candy stuck to teeth, temporarily, but the dissemination of the goodies became a lasting tradition. Gutrich made his pitch to a Boy Scouts council member at The Church of Jesus Christ of Latter-day Saints in Wilmette last fall.

The council member’s occupation? A doctor, no kidding.

“He told me, ‘I like your project; it’s unique,’ ” Gutrich recalls.

The doc then delivered the good news to the teen, green-lighting a service endeavor that’ll morph Boy Scout Will Gutrich into Eagle Scout Will Gutrich upon completion. Eagle Scout is the highest achievement or rank in the Boy Scouts of America program. And attaining it at the age of 15 is akin to graduating from high school after a little more than two years; Gutrich had amassed merit badges at a dizzying, ride-at-Six-FlagsGreat-America pace since the age of 10.

Earning a minimum of 21 merit badges is a requirement for Eagle Scout.

“Sewing isn’t a merit badge, but maybe it should be, right?” says Sheila, who, since her diagnosis, has befriended and emboldened nine breast cancer survivors, including four related to Wilmette Troop 3 Boy Scouts. “I asked Will about the presentation as soon as he got home. All he said was a simple, ‘It went fine.’ That was it. You know, a teenager’s reaction. Will’s a joy. He’s just a really good boy, a boy who essentially has had a sick mother since he was 11. He’s into robotics and water polo in addition to all the time he devotes to Boy Scouts, and he plays the trombone for a couple of bands at New Trier.

Another one of Will’s inspiring “band” mates is his stepfather, architect Stuart Berger.

“He’s helped me with a lot of things,” says Gutrich, whose first water polo season at NTHS was reduced to a few practices and an intrasquad scrimmage because of the pandemic. “I’m a better cook because of him. He’s taught me how to be a better musician, how to think smarter.” Gutrich likes to bike in the summertime, sometimes 10 miles a day, and play video games with his friends. Normal stuff.

For more information about The Licorice Project, visit thelicoriceproject.com.