Karen Nochimowski of Deerfield was lying in bed at 3 a.m. one morning in June 2018 and an idea popped into her head. Nochimowski, founder of the popular Momma Chef blog with nearly 100,000 followers, wanted to bring the simple recipes she’d been sharing with her followers to a soup kitchen that could feed the homeless.

Later that morning, she hopped on to Google to start searching for a location that might be able to host a soup kitchen. She soon stumbled on Congregation KINS, a synagogue in West Rogers Park, and reached out to its leaders to see if they might be interested. A few months later, Momma Chef’s Soup Kitchen was born.

“I have a fundraising background and worked with nonprofits for many years, including the Anti-Defamation League, so I saw my life prior to having kids and my experience organizing events and activities to be helpful,” Nochimowki says. “I volunteered for many years for a food pantry so I had an idea of what it was like.”

Mama Chef’s Soup Kitchen is a natural outgrowth of the Momma Chef blog, which Nochimowski launched so she could easily share recipes with friends, family, and other moms (she has three sons) looking to provide healthy, home-cooked meals for their kids. Her cooking philosophy can be summed up as: “6 ingredients, 6 minutes of prep time.”

“When I first started the blog there was a picture—a caricature of a mom with a kid on her hip and another hanging on her leg—and that was my reality,” Nochimowski says. “When I was cooking, I would be trying to hold one of the kids while breastfeeding and making pasta at the same time.”

Nochimowski grew up with a single mom who was “always cooking” and she learned her style both by force of habit and necessity. She cooked for her roommates while studying abroad in college and later found herself able to throw dinner parties for 10 to 15 people with just 20 minutes of prep time using her own simple recipes.

“I really believe that sometimes you find your love of something just by doing it and you realize, ‘wow I love this’,” she says.

After she started posting photos and recipes to her Momma Chef blog, it quickly took off. She has more than 36,000 followers on Instagram and is a frequent contributor to food and lifestyle magazines.

“I didn’t have Instagram or Twitter when I first started. I might have done a little advertising on Facebook,” she says.”I didn’t really know what I was doing but then all of a sudden people started sharing my posts and I quickly had 3,000 followers, then 5,000, and it just grew from there.”

Before the COVID-19 pandemic brought stayat-home orders across the nation, Nochimowski and her volunteers were serving more than 100 needy individuals and families each week. Every Tuesday night, she and her volunteers would prepare and serve meals, all drawn from her recipes, at Congregation KINS.

“Because we do it once a week that makes us a little bit different. There’s no overhead and there are no employees so we can really put money into the meal,” she says. “There are a lot of soup kitchens that are doing it daily so it’s more of a basic meal just because that’s all they’re financially able to provide.”

Karen Ecanow is Nochimowski’s right-hand volunteer. The two met at Moriah Congregation, their synagogue in Deerfield. While Nochimowski runs the upstairs kitchen, Ecanow coordinates volunteers who handle logistics and seating in the dining room. Ecanow is grateful for the opportunity to be a part of the soup kitchen.

“When we decided to open the soup kitchen, we discovered it was a two-person job and it was a good way for me to combine my interests,” Ecanow says. “I also enjoy cooking and I really wanted to help people.”

Blogger Karen Nochimowski of Deerfield uses her love of food to do good things in the community. 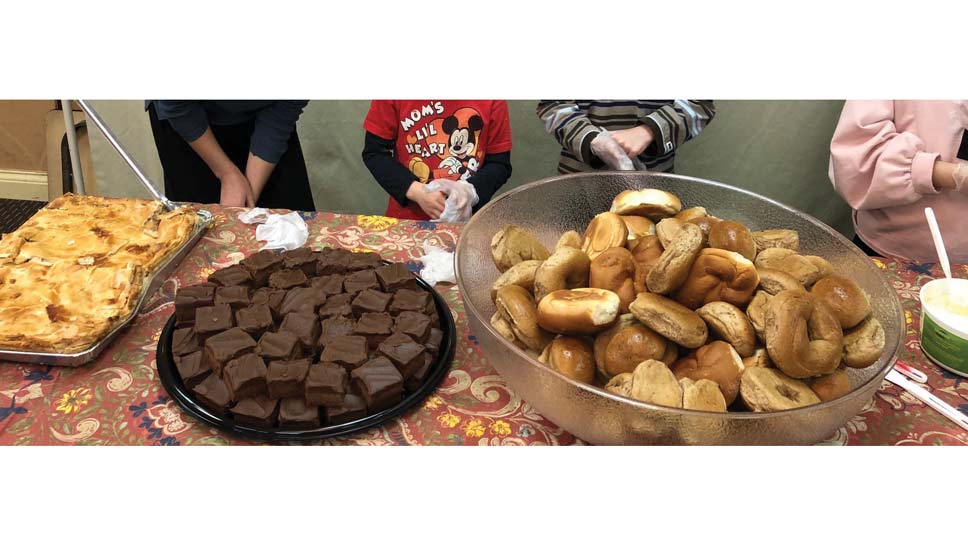 Ecanow says part of her motivation is her commitment to the Jewish community and working with other volunteers to give back. She also enjoys the atmosphere.

“The work is very relaxed. If we’re seeing the food’s not getting cooked in time, we’ll figure it out,” Ecanow says. “We don’t have bread for a recipe, and we’re supposed to have it, so we make something else.”

During the state lockdown, Congregation KINS was forced to temporarily close its building and Momma Chef’s Soup Kitchen along with it. But that didn’t stop Nochimowski from continuing to feed the needy.

She took the soup kitchen on the road.

A chartered bus had already been bringing in residents from a Chicago shelter to Congregation KINS each Tuesday. Leaders from the shelter reached out to Nochimowski to see if she could continue to provide meals for residents of both the shelters they operate.

Tapping into a soup kitchen volunteer list of more than 700, Nochimowski proceeded to organize a home-cooked meal drive for the shelters. Volunteers signed up for a particular day and meal and cooked from their own kitchens.

“I set up a Google spreadsheet where volunteers could pick a slot and posted it to Facebook. Four hundred people volunteered within five hours,” she says. “They drop off the dishes they cooked to me and I deliver them to the shelters.”

That effort has led to Nochimowski’s latest project, Chicago Strong, which uses a Facebook group (Chicago Strong Group) to match similar nonprofits with those who might be willing to help. Launched on June 2, the group already has more than 600 followers and is seeing posts from nonprofits around the city.

“My biggest challenge right now is that we have so many organizations posting about their needs and we need more members to meet the needs, so I’m really trying to get the word out,” Nochimowski says.

A blog that started with Nochimowski’s desire to share recipes with friends and family has grown into a project that not only feeds the needy, but now is a force in getting resources directly to nonprofits during these challenging and unprecedented times.

“Karen is a powerhouse; she’s amazing,” Ecanow says. “She really works hard at this, from getting the volunteers to the donors. She is perpetually trying to find ways to reach more people.”

For more information, visit the Momma Chef blog at mommachef.com.