Sarah Matthews’ heart got super warm near an ice rink several years ago.

The Highland Park resident was on a break with other young campers at her first hockey goaltenders camp at American Heartland Ice Arena in Lincolnwood. A wide-eyed middle school student in 2016, Matthews sat in a spacious room on a Wednesday afternoon, munching lunch and listening to camp coach Amelia Murray.

But Murray said nothing to her audience about stick saves or glove saves or the use of the butterfly style to halt fast, ice-dancing pucks.

Murray explained instead why she and her father launched the initiative Shutouts for Seizures.

A helmetless Matthews was all ears.

“I learned a lot about epilepsy and Amelia’s cause that day,” recalls Matthews, now a 5-foot-7 juniorto-be at Highland Park High School and the starting netminder for Scouts, a girls hockey club comprised of studentathletes from several Lake County high schools and the two-time reigning Founders Cup champion.

A member of Murray’s family had been diagnosed with epilepsy, and Amelia wanted to do something, anything, to raise funds for epilepsy research and ratchet up awareness of the prevalence and devastation of the neurological disorder. Murray, a recent Union (N.Y.) College graduate, loved hockey back then. Still does. Murray stopped slap shots and tips and all kinds of shots in between. Murray recorded shutouts, regularly, for her Chicago Young Americans (CYA) AAA and Division I college teams.

Murray, a McHenry resident and former Crystal Lake Yellowjackets puckster, had asked one of her team’s families and friends to donate a dollar figure for each shutout before her eighth-grade hockey season and continued to do so for a bunch of seasons thereafter. Every cent each year went to Chicago-based Citizens United for Research in Epilepsy (CURE), Murray told that group of young goalies at lunchtime.

Matthews’ eyes suddenly expanded to a pair of Ferris wheels. The defenseminded player shifted quickly to offense mode outside the rink, right then, right there. That nobody in her life was an epileptic mattered little to the rising seventhgrader.

“I wanted to help,” Matthews says. “I thought that was great, Amelia finding a way to help someone close to her through hockey for many years. Shutouts for Seizures gave me an opportunity to help others, to help my community, all while playing a sport I love.”

Like many stellar hockey players in Illinois, Matthews battled for a pair of teams in 2019-20. She also parried shot after shot for the AA Chicago Jets, sharing time in goal with Latin School goaltender Quinn Eatinger; the duo combined for 10 shutouts. Matthews also blanked six foes in Scouts games and finished with a 2.73 goals-against average, a .904 save percentage and 564 saves, including 28 in 39 minutes in the Scouts’ 3-1 defeat of Maine in the Founders Cup final on March 6.

“My teammates and I have received tremendous support and donations from parents, grandparents, aunts and uncles, and coaches,” says Matthews, the daughter of Don—a Deerfield native and former Falcons hockey forward—and Kim. “All have been enthusiastic about giving. 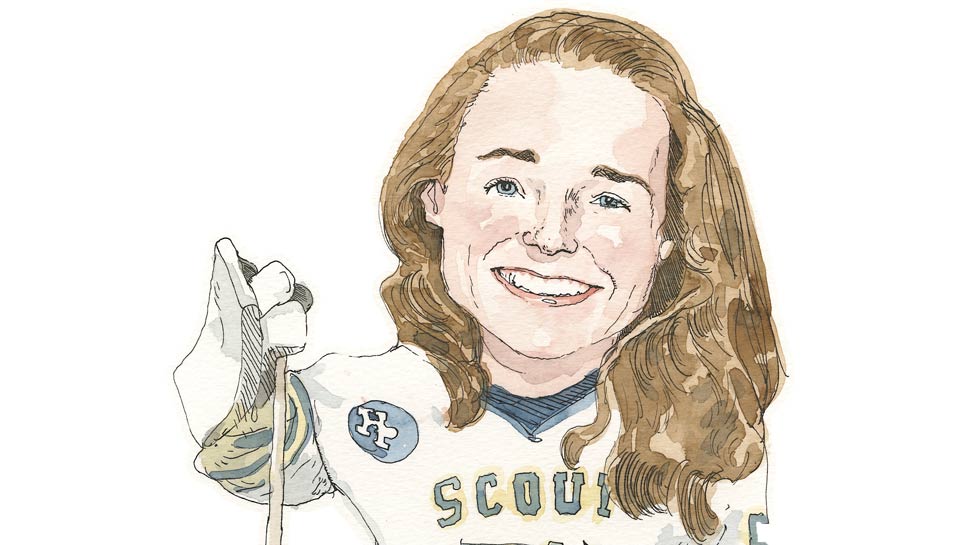 “I send a check to CURE and make sure I email a thank-you note to every donor after each season.”

Matthews started her hockey career has a skater, in part because older sister and former Scouts captain Hannah Matthews (now a DePaul University film major and philosophy minor) skated in games as a tenacious defenseman, and “I wanted to be like her,” li’l sis admits.

Sarah Matthews later served as a goaltender for a team on a rotational basis. Don and Kim weren’t exactly thrilled when they had to watch rocket shots zip toward their daughter, buried somewhere underneath those pieces of bulky equipment. But they’d soon find out Sarah loved the position and thrived in goal. Coaches admired Matthews’ airtraffic-controller calm during a foe’s flurry of scoring chances in or near the crease.

“I like challenging positions in all sports, not just in hockey,” says Matthews, who never wilted when she faced challenges as a soccer goalkeeper and would have gladly accepted the demands of playing shortstop for Highland Park High School’s varsity softball team this spring had the pandemic and its attendant concerns not tarped the Giants’ entire season.

“What I also like about being a hockey goalie is that it requires athleticism and mental strength.”

Off the ice Matthews digs “Iron Man” flicks and finishes voluminous Harry Potter books slightly faster than it takes a speed reader to consume the descriptions of entrees and desserts on a Denny’s menu. She cuts neighbors’ lawns with a mower, or a Zamboni’s outdoor pet.

She’s thinking seriously about becoming an engineer, like her father, and playing college hockey at the NCAA Division III level since hitting the books means way more to her than snaring a shot for another acrobatic save does.

“Education before hockey,” says Matthews, sounding like someone twice her age and a forward-thinking college counselor. “But I’ll continue to play hockey for as long as I can; it’s fun. My parents have been great and incredibly supportive, driving me to rinks everywhere for practices, for games. They motivate me and like to remind me, ‘It’s not about winning,’ and, ‘Don’t worry about the outcome of a game.’ My coaches?

They push me and encourage me.”

Look for Matthews, minus her grass-stained sneakers, to grab some tennis balls in her free time this summer and juggle, juggle, juggle, or to chuck those same yellow spheres at a wall and secure Roadrunner-rapid rebounds.

A hockey goaltender without sharp eye-hand coordination, after all, is a pony-less polo player without a mallet.

Have stick, will save.

For more information about Citizens United for Research in Epilepsy (CURE), visit cureepilepsy.org