Ed Kugler quit meat cold turkey nearly 50 years ago. The Highland Park teen who’d regularly eat bacon for breakfast, cold cuts for lunch, and some kind of meat for dinner returned home from Michigan State University one summer day in the early 1970s and made a startling announcement to his parents, Fred and Honey:

“They freaked,” recalls the gregarious Kugler, now 67, a gifted storyteller, and the manager of Ravinia Farmers Market. The beloved market opened at Jens Jensen Park in Highland Park for the 42nd year on June 3 and runs every Wednesday through October 28 (priority hours for high-risk shoppers: 7-8 a.m.; general public hours: 8 a.m.-1 p.m.).

Kugler was in an intro to restaurant management class at MSU when his brow furrowed hard and morphed quickly into rows of tilled flesh. A professor had informed the class that the way food looked and tasted was more important than its ingredients or how it was grown. The assertion made zero sense to the boy known as “the nice guy” during his days at Highland Park High School.

Kugler then devoured books for health nuts before a “health nut” was a designation and pored over more ingredients on food labels than young, rabid baseball fans read statistics on the back of baseball cards. He did not complete his studies at the Big Ten-school in East Lansing, Michigan, but he earned a “Ph.D.” in Organic Food in one month in 1976, via traveling some 5,000 miles, coast-to-coast, to visit 52 natural food stores, 37 natural food restaurants, 19 distributors, and 14 organic food farms. 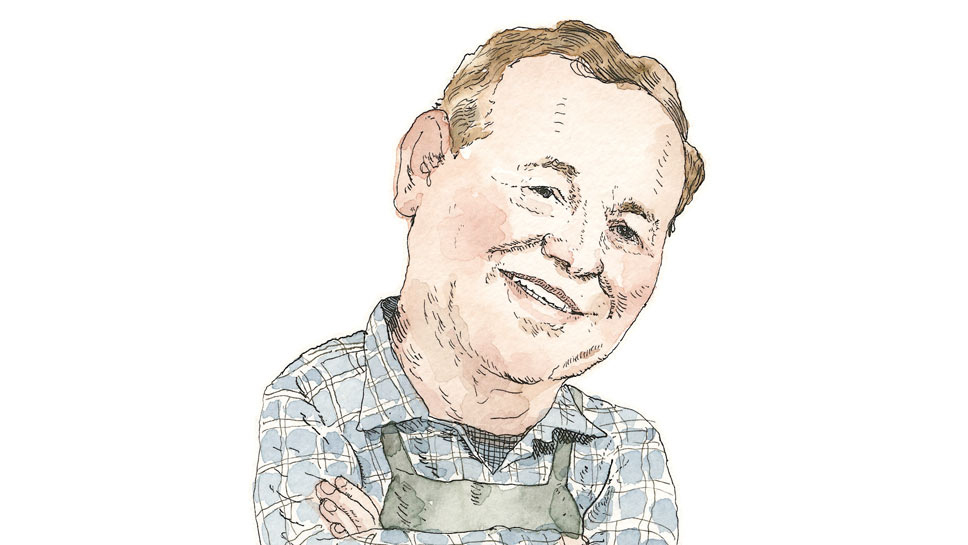 That World Vegetarian Conference, held in Bangor, Maine? Curious Kugler was there. Another conference, staged in Fairfield, Connecticut, the one with natural hygiene diet expert Dr. Herbert Shelton topping the bill? The guess here is that attendee Kugler left the gathering with at least one sore arm, the by-product of having asked so many questions.

Two years later, a vendor known as “Sprout Man” set up shop at the inaugural Ravinia Farmers Market (RFM). He did not wear a cape adorned with an “S” in 1978. Nor did he shoehorn himself into a phone booth to slip into a pair of red muck boots. Ed Kugler was, however, able to leap a crowded platter of whole cucumbers and tomatoes in a single bound.

Look for the 42nd RFM—backed by the Ravinia Neighbors Association and Taste Marketing—to feature a bunch of firsts because of the pandemic, including one-way foot traffic to ensure safety and social distancing, an online preview of purveyors and their wares, and the option to pre-order and pick up goods (offered by on- and offsite vendors).

“It’ll be safer than going to a grocery store, because it’s outside and less congested,” Kugler says. “Locally produced foods available at a farmers market also means less handling. “Our farmers market, what makes it special, is its historical setting, its proximity to Ravinia Festival,” he adds. “It sits in a neat, little district.”

A Frank Lloyd Wright Prairie-style house rested across the street from the Kugler house when Ed was young and his mother could count on the future natural and organic food guru to bake cookies and coffee cake. The view of the Wright house, a historical landmark, was impossible to miss at dinnertime. “We’d talk a lot during dinner, mostly about the family business [Chicago Window Cleaning, now part of The Millard Group],” Kugler says. “But that talk never left that room. Families having meals together, at home—think about how common that is now, because of the pandemic. Kids are no longer in programs after school, are no longer able to spend so much time in sports or other activities. There’s more family togetherness than ever.”

Kugler has been married to his second wife, Randi, for seven years. A former administrative assistant, she is a computer whiz and an eagleeyed proofreader. “My backbone,” insists Ed, who has two children from his previous marriage, the eldest named A Owen Kugler, or A-OK for short. He’s 30; his sister, Lillie, is 28. In 2001 Kugler introduced the TasteA-Thon concept, providing organic and natural food samples to students at local elementary schools. It’s never too early to consume healthy fare and fall in love with the edible choices, right? Eleven years ago, Kugler started to welcome Highland Park High School AP Environmental Science students to his back yard, home to 90 raised beds. It’s known as the Organic Teaching Garden, a fertile, wall-less, chalkboard-less space for learning.

Kugler and Robert C. Boyce, a landscape contractor and architect, serve as Organic Food Club partners. Customers choose vegetables and herbs and their growing and harvesting schedules. The club’s growing areas are located in Highland Park and Lake Zurich.

Tinley Park is home to the venue formerly named New World Music Theatre. Kugler knows it well. Farm Aid, a fundraising concert founded by Willie Nelson and John Mellencamp and Neil Young, was staged there in 1997, in 1998, and for its 20th anniversary, in 2005. Organizers in ’97 were forced to shift the concert from Texas to Illinois—a mere three weeks before the Farm Aid date. New World Music Theatre employees scrambled.

So did Kugler. Wholesaler Goodness Greeness contacted Kugler and asked him to round up crew members to procure donations. With help from Choice Sales & Marketing West President Reed Glidden, Kugler’s team collected more than $10,000 worth of organic produce that sated more than 1,000 musicians, staff, volunteers, VIPs, and guests.

Young even sang the foods’ praises on stage, probably between performing “Heart of Gold” and “Harvest.”

Fast forward to today, 23 years later, the year Kugler and his HPHS classmates are all agog about reconnecting in person and listening to past charttopping hits at their 50th reunion. But the pandemic will likely rearrange that event, too. Zoom conferencing, with its “Hollywood Squares” gameshow look, is clearly the best candidate to salvage portions of it.

Kugler still keeps in touch with many of his friends from grammar school. Some will certainly stop by his Organic Food Club tent (No. 2) at the Ravinia Farmers Market to chat and laugh and reminisce on a Wednesday or two.

“My good friends have told me, ‘You promoted organic foods all those years ago and stuck to your guns,’” Kugler says. “They’ve also said, ‘Kudos for being ahead of your time.’”