New Trier High School’s athletic director flitted from front yard to front yard along the North Shore, planting a lawn ornament into each. He had permission from homeowners to do so, and he received plenty of landscaping help from NTHS head coaches and assistant coaches. The thrown-together ground crew made 196 house visits in all, because 196 NTHS senior athletes were set to compete this spring.

Until the pandemic came along and shuttered fields and courts and pools and track ovals. A virus took its ball and went home, wherever that is. The Illinois High School Association (IHSA) canceled all spring sports seasons because of COVID19 concerns on April 21.

For suddenly benched, stay-at-home senior athletes, intermittent honking horns from passing cars would have to suffice, would have to somehow replace sustained roars from New Trier-green-clad spectators in stands.

“We all had anticipated the IHSA’s decision,” says the 49-year-old Fontanetta, NT’s athletic director since 2016 and a New Trier teacher/coach from 1994- 2008. “That was a tough day. Hard to stomach. I felt for every athlete and everybody involved in an extracurricular activity, not just our seniors, and I felt for all of our coaches. Coaches, like our athletes, take pride in representing New Trier and had prepared months for their spring seasons. Think about what our seniors have also missed or will miss this month—yearbook distribution, prom, graduation.

“Our seniors also won’t get to enjoy that feeling of being a senior walking in our hallways in their final month at New Trier,” he adds. “That probably doesn’t sound like much, but that’s a special feeling.”

At this time last spring, amid the staging of postseason tournaments all over the state, it wasn’t unusual for Fontanetta—the husband of Chris and the father of their three multi-sport athletes (University of Wisconsin-Oshkosh senior Katie, 21, and Buffalo Grove High School students Megan and Alyssa)—to start his workday at 7 a.m. and return to his home in Arlington Heights at 9:30 p.m.

This spring? Fontanetta and his immediate staff had to formulate contingency plan after contingency plan before the IHSA scrapped the 2020 spring sports season. Now, instead of watching Trevians zip around a track at a big meet, he’s conducting meetings via Zoom. It’s just not the same. One of Fontanetta’s assistants, Jim Burnside, also coaches varsity girls soccer at the school. The six-time state champion coach recently hosted a virtual banquet for his 0-0-0 squad, tied for the best overall record in Illinois. A Lou Malnati’s personal pizza was delivered to each booter. 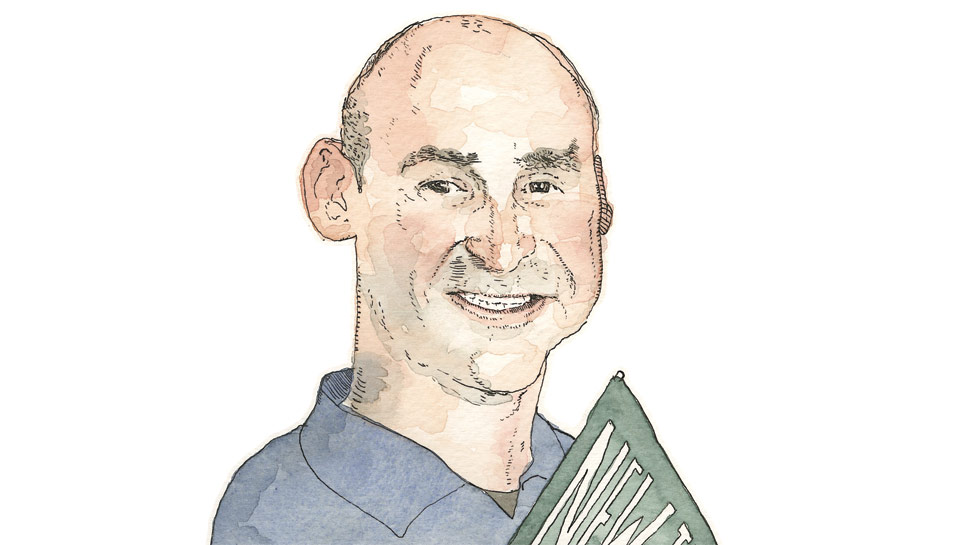 “Jim told me all about it,” Fontanetta says. “Told me there was a lot of laughter. A lot of crying, too.”

Nothing would make Fontanetta smile wider than the opportunity to honor New Trier’s senior athletes in another way would. More than 60 of them committed to play a sport in college. There’s hope of holding a latesummer gathering to recognize all 196.

“If that won’t be possible,” Fontanetta says, “maybe we’ll be able to do something for them at the school when they’re home for Thanksgiving.”

A young wrestler/ football player named Augie Fontanetta ate turkey on the last Thursday of November at home in Norridge during his formative years and beyond. As a Notre Dame (Niles) High School student, he’d pile a second helping on his plate, but only when he wasn’t worried about making weight for the Dons’ upcoming grappling meet.

He was raised by his late father, also named Augie, and his mother, Gilda.

The elder Augie was an avid sports fan, a hardworking Norridge Park District board commissioner and an approachable, uber-friendly Little League coach.

“My father was genuine, very involved in the community,” says the son, who coaches travel softball in the summers (Katie Fontanetta played nine seasons on teams coached by her father). “Everybody liked being around my father. He was the ‘mayor’ of Norridge.”

“She took me, a raw kid, and helped me mature as a teacher,” says Fontanetta, who guided varsity wrestlers at the Winnetka school for five seasons before Fremd High School plucked him to serve as the Palatine school’s athletic director, beginning in 2008. “My passion for coaching also catapulted me to my passion for teaching. Bonnie had a great influence on me. She helped me learn about the tremendous culture at New Trier. Coaches at New Trier are teachers first, and those teachers consider playing fields and other athletic venues as extensions of their classrooms.”

Fontanetta helmed the Vikings’ athletic department at Fremd for five years before accepting an administrative position at Township High School District 211. His “Bonnie Beach” at Fremd was Lisa Small, who soared from principal to District 211 superintendent at breakneck speed.

“Perspective … Lisa’s perspective is always good,” Fontanetta says. “She kept a level head when I worked with her. She was firm and consistent as a leader.”

He lauds New Trier Principal Denise Dubravec’s leadership today. He marvels at Burnside’s perpetual hunger for putting his players in a position to capture the state’s biggest soccer prize.

“You’d think a coach like Jim, with all of the state championships he has won in his career, would lose some of his drive to succeed. Well, you’d be wrong. Jim’s passion never wavers. Never, ever. He believes every player in his program should be able to experience the feeling of being a part of a state championship team at least once, and he works incredibly hard, each season, to make that happen. I truly admire him.”

Fontanetta misses a lot this spring. Misses highfiving coaches and players after big wins. Misses watching joyous Trevians touch state hardware. Misses shaking hands and laughing with other Central Suburban League athletic directors on sidelines during contests. Misses interacting with a New Trier all-stater for a few minutes and then making the last player on the bench feel like an all-stater minutes later.

“I love my job, love seeing our athletes develop and mature from year to year,” Fon- tanetta says. “I love connecting with kids and stopping them in the hallways to chat.

“I have found a silver lining during this pandemic, and I know others have, too. I get to spend more time with my family.”