When the athletic careers of Brandon Bollig and his wife, Dannah, came to an end—his as a professional hockey player and hers as an NCAA Division I soccer player—both were looking for a workout that could help them stay in shape.

Years of playing two physically demanding sports had taken their toll, and Dannah began experimenting with a training regimen using bands to create resistance rather than weights, and a workout that didn’t involve exercises that put pressure on the joints.

Late last year the Bolligs launched Dannah Eve, which offers a set of resistance bands that can be used for cardio workouts and to workout other areas of the body. Together, the bands weigh 1.5 pounds and are perfect for working out at home or while traveling.

Dannah Eve recently began offering a subscription service, The DE Method, that provides access to videos of Dannah demonstrating the many varieties of ways the bands can be used and the five specific workouts for all areas of the body, including abs, buttocks, arms, and upper body.

“We really took something that started as a hobby and passion for Dannah, and once her soccer career ended she got the ball rolling on small-scale stuff with fitness videos and that type of thing,” Brandon Bollig, a member of the 2013 Stanley Cup-winning Chicago Blackhawks, says. “Once I retired, we really put in the process of making it a real business and taking it to a new level.”

“My soccer career, unfortunately, didn’t go as planned but it did expose my passion and love for fitness. Once I retired, I told myself I was going to take a few months off and let my body rest and recover because my body was so beat up from the wear and tear,” Dannah, who played soccer at the University of New Mexico, says. “But a few weeks later I was back in the gym. My respect for working out was out of it being a necessary evil, but in hindsight fitness was always my healthy outlet and form of therapy, my escape from the world where no one can tell me what to do or how to do it.” 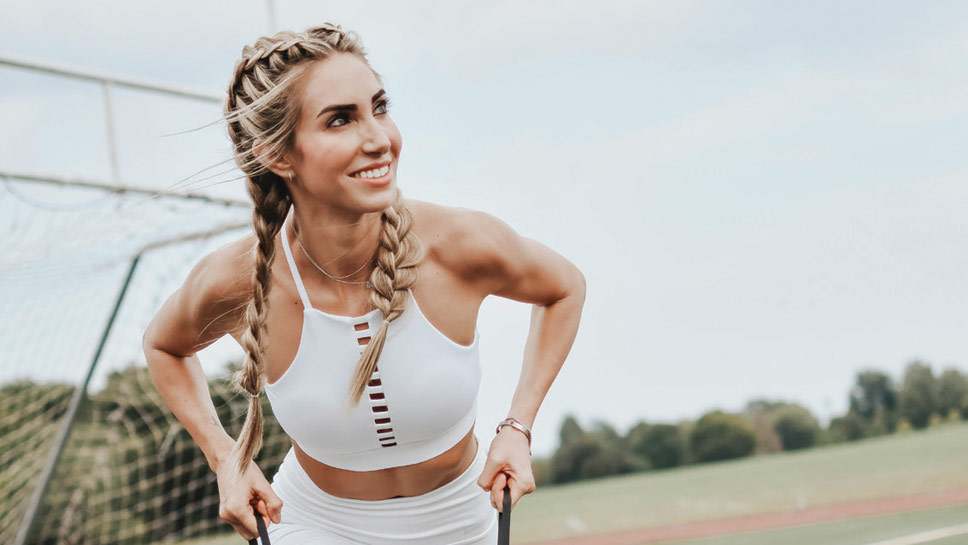 Not surprisingly, Brandon and Dannah met at a gym. The two worked out at the same gym in Highland Park, where Dannah grew up, got together in 2016, and were married in 2018.

“At the time Brandon was still playing professional hockey and we were constantly on the go. I tried to get a gym membership wherever we were, and it just started getting really tough,” Dannah says. “We were moving so often that a gym didn’t seem like the best way to maximize my time or my workout.” 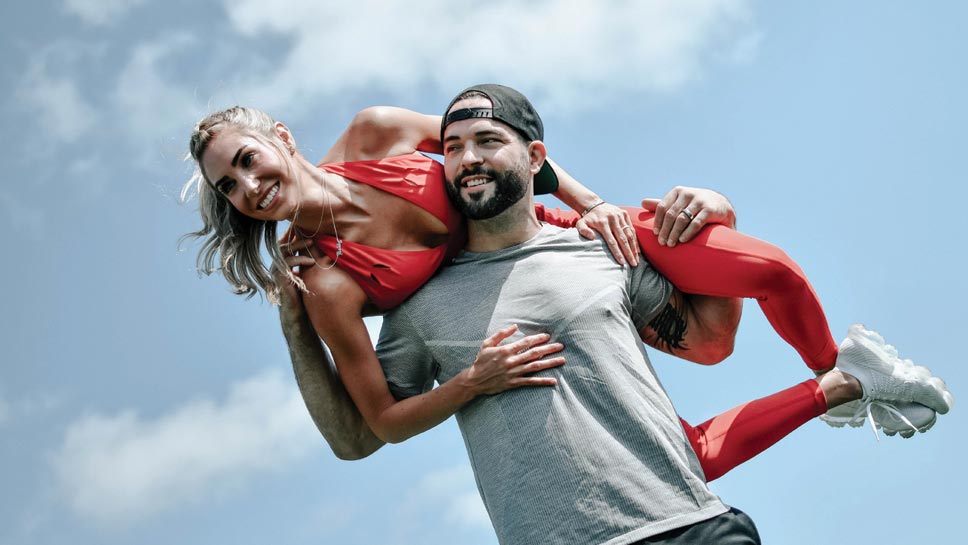 Dannah says she didn’t realize at the time that she was creating her own type of training as she began to gravitate further and further away from higher intensity exercise, working with resistance belts instead. She posted her workouts on Instagram, eventually building up a following of more than 25,000, and the idea to turn it into a business was born. 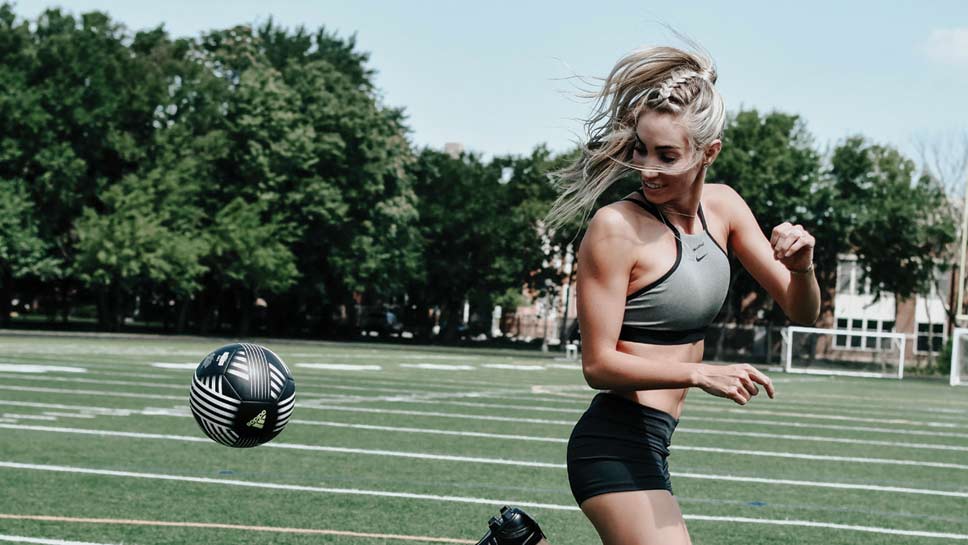 Dannah Bollig is a former NCAA Division I soccer player for the University of New
Mexico. PHOTOGRAPHY COURTESY OF DANNAH EVE FITNESS

“For the first time in my life I was more lean and I felt stronger than I had ever been and I truthfully was more confident in my own skin,” she says. “So after about three-plus years of practicing and really refining this training style, Dannah Eve was born.” 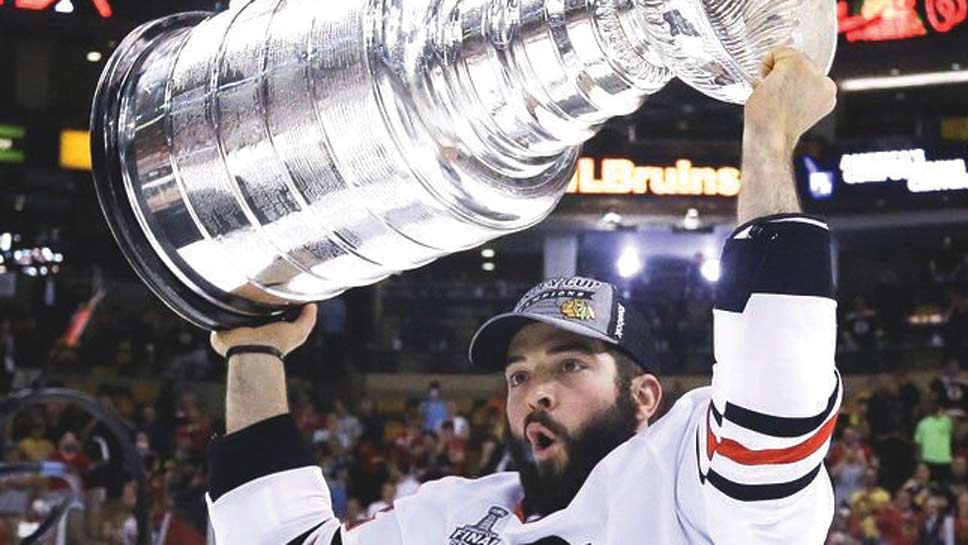 Brandon Bollig won the 2013 Stanley Cup
while a member of the Chicago Blackhawks.

The spread of the coronavirus earlier this year prompted the couple to speed up The DE Method and video offerings, knowing that gyms were closing and many people would be confined to their homes but still looking for ways to stay active.

“We just went into overdrive and really put our hearts and souls into creating these work – outs and getting the subscriptions up as soon as possible so that people could benefit from them and still get a great workout in, while staying in their own homes,” says Dannah.

The two former athletes, who trained at the highest levels during their playing days, are particularly proud to be offering workouts that are accessible to anyone and for all age groups and fitness levels. Because the work – outs put less pressure on the body, they are a good long-term solution to staying fit.

“I couldn’t continue to train at a high level of intensity that’s so hard on my body, and that’s the beauty of this,” Dannah says. “It’s really for everybody. We wanted to make everybody feel included no matter their age or experience; and everybody with limited time or space can change their life in less than 30 minutes a day.”

Rachael Kahan, a high school teacher and coach who lives in Chicago, says the variety of workouts and the convenience of working with the bands is what drew her to The DE Method.

“I never used bands before and now I realize how effective they can be,” says Kahan. “The bands are really easy to use and the way Dannah models them and demonstrates them makes it really easy and accessible.”

Kahan, who coaches a freshman girls bas – ketball team, says she’s encouraging her students to consider using The DE Method to stay in shape while they can’t hit the gym for workouts.

For someone as busy as Stephanie Biegel, an entrepreneur in Chicago, The DE Method is all about getting a lot done in a short amount of time.

“I follow Dannah on Instagram and saw her workouts and her bands,” Biegel says. “For me, as a working woman, time is of the essence. I can weave her workouts into other things I do and fit them into my current life.”

Talia Brahms, who works in sales and lives near Fort Lauderdale, Florida, says the variety of workouts created by Dannah initially grabbed her interest.

“When the pandemic started, I was at a loss for how to continue my workouts and keep them exciting and versatile,” says Brahms. “There are only so many jogs around my neighborhood I can do without getting bored. Dannah was posting videos on her Instagram with new moves and it got me interested.”

Like many successful businesses, the Bolligs point to the organic growth of an initial idea, and their ability to work well together to see it come to fruition in the form of a new business, as a source of satisfaction.

“This is so cheesy but I always tell people Brandon is my best friend and we really do everything together,” Dannah says. ” To be able to launch a business and not only that, to have it be successful, is rewarding.”

“To be able to start a business with your best friend who’s also your spouse is just a very cool experience,” adds Brandon. “We really appreciate that we’re in a position to do it.”

Subscriptions to The DE Method are available for $9.99 per month or $99.00 per year. The DE Total Body Set is available for $69.99. All can be purchased at the Dannah Eve website at dannaheve.com.