The show must go on.

That’s the message from Sheridan Road Charitable Foundation (SRCF) and three gifted and award-winning songwriters who will perform from a Nashville studio to a virtual audience on the evening of May 21.

Since its founding in 2013, the Foundation has organized Songwriters in the Round, intimate concerts featuring some of Nashville’s most decorated songwriters, to raise money for the Foundation’s nonprofit partners. The 11th edition, and the first performed virtually due to Covid-19, will feature Kelley Lovelace, Chris DeStefano, and Ashley Gorley, who collectively have written more than 60 number one singles for country stars such as Brad Paisley, Carrie Underwood, Jason Aldean, Tim McGraw, and Thomas Rhett.

“The idea for the Songwriters in the Round benefit came out of a conversation I had with Pete Fisher, a good friend of mine and the former CEO of the Academy of Country Music,” says Daniel Bryant, founder of the SRCF.

Concerts in the past have been held in Denver, Nashville, and at Joe’s on Weed Street, in Chicago.

“It’s a very unique experience that isn’t being done anywhere else,” adds Bryant. “We’re bringing in the storytelling songwriters for intimate concerts, and it’s worked out really well.”

To date, the Songwriters in the Round concerts—the first was held in 2013—have raised more than $1 million for nonprofit organizations which are aligned with SRCF’s mission. Over the years, 14 different organizations have received funding as a result of fundraising from the concerts.

“If you look at the three areas of focus for the Foundation, they are, first, making impactful investments into urban educational initiatives that can improve outcomes for kids,” Bryant says. “Number two is helping underresourced communities through after-school and mentorship programs, and the third is cancer and health care awareness where we’ve funded projects like mobile mammograms and dental trucks.”

Four organizations that focus on helping underprivileged school children and teens will benefit from this year’s Songwriters in the Round benefit.

They include Boys Hope Girls Hope in Denver, Oz Arts in Nashville, and By the Hand Club for Kids and Communities in Schools in Chicago. All four have existing relationships with the Sheridan Road Charitable Foundation and Bryant says they and the Foundation have a shared vision.

“We’ve vetted them to make sure they are a match or a good fit for us, and from a geographic standpoint we want to make sure our donations are going to the right areas,” Bryant says. “Oftentimes there are very specific initiatives within each organization and that’s how we initially built a relationship with them.”

By Hand Club for Kids in Chicago partners with Chicago Public Schools to provide resources and mentorship for at-risk school children ages K-12. The organization currently works with more than 1,600 children helping to guide them through school and life.

“At By The Hand Club for Kids, we just do what our name says,” says Susannah Schwarcz Yount, the organization’s Senior Director for Fund Development. “We take kids by the hand and walk with them kindergarten through college, helping them have an abundant life—mind, body, and soul.”

Betsy Sorensen and Daniel Bryant at the Nashville Songwriters in the Round event from last November at the Standard at the Smith House. PHOTOGRAPHY COURTESY OF SRCF

This past year, 100 percent of seniors enrolled in By the Hand Club for Kids graduated high school and more than 75 percent went on to technical school or university. The organization works with children from five low-income neighborhoods in Chicago that have been identified by their public schools as needing extra help.

“The kids are already falling through the cracks academically and that’s really what Sheridan Road Charitable Foundation likes and appreciates, that we’re not serving kids at the top,” Yount says. “We’re serving those kids that are most likely to drop out of school and we’re coming alongside them, helping them with homework, helping them with reading.”

The organization also provides financial assistance to children and families such as health care and dental care, and even hot meals each evening. During the Covid-19 crisis, it has supplied 300 of its students with laptops so they can continue to learn at home.

“We’re not just helping these kids it’s like they’re growing up with us and we want to see them all the way through,” Yount says.

Mary Frances Tharpe is executive director of Boys Hope Girls Hope Colorado, another of the Foundation’s recipient organizations focused on elementary and secondary education. The organization provides mentoring and educational opportunities for underserved kids, who have academic potential and motivation, but need some help beyond school to get them through high school graduation and on to college.

“We help kids in high school, who are at risk of not graduating, prepare for high school graduation with the idea that they will in most cases go off to college,” Tharpe says. “Then we support them with a scholarship through college.”

Through partnerships with two high schools in Denver, the organization identifies 8th grade students who are motivated, want to be in school and go to college, but just need a road map to help them get there.

Tharpe says that funding from the Songwriters in the Round benefit will be particularly helpful this year because fundraising will lag due to the impact of the Covid-19 crisis on the economy. 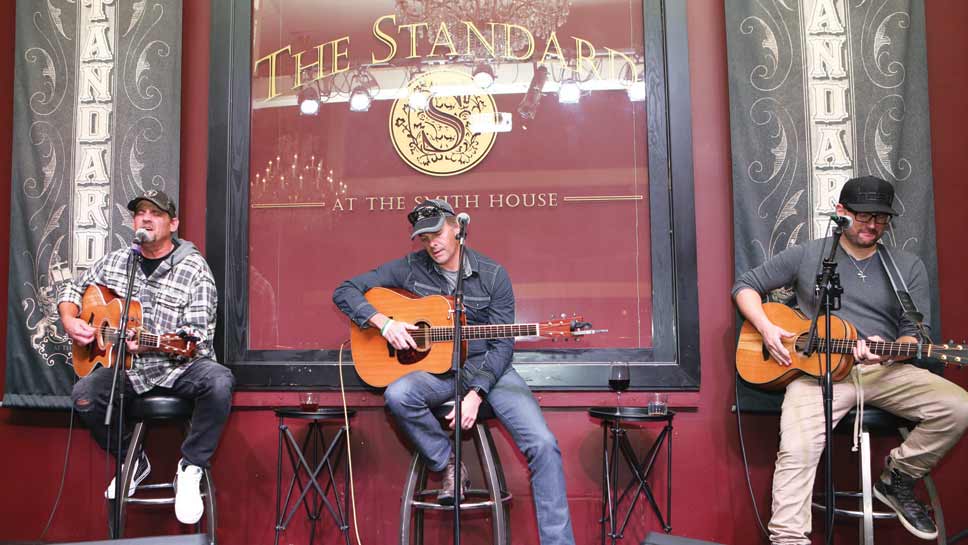 Neil Thrasher, Kelley Lovelace, Chris DeStefano at the Nashville Songwriters in the Round event from last November at the Standard at the Smith House PHOTOGRAPHY COURTESY OF SRCF

“It’s huge to be getting this funding. We are a small organization and we really stretch every dollar,” Tharpe says. “We really appreciate the support of the funding community.”

In addition to the contribution, Tharpe says the exposure that the event brings to her organization is of high value, and she’s also a fan of the music.

“This is a really fun event. It’s so great to hear the backstory with the art of the songwriter and how the song came to be,” Tharpe says. “Especially when you hear the song again on the radio.”

For songwriter Kelley Lovelace—who’s written hits for all of the country music leadine artists, including his longtime friend, Brad Paisley— Songwriters in the Round is an opportunity for him to continue to give back and to support causes that are close to his heart, something he’s been doing since early in his career.

Originally from Chattanooga, Lovelace first got involved with Bethel Bible Village, a home for teens from troubled backgrounds. When he moved to Nashville, he continued the association and began working with other charities, including St. Jude.

His commitment to SRCF and the Songwriters in the Round began with the first concert in 2013 at the Grand Ole Opry in Nashville, and he’s participated in all but one of the events since.

“You know it just feels good to give back because especially with the songwriting thing, there’s no rhyme or reason why you have success,” Lovelace says. “It’s not always the most talented person who wins. Being a Christian, I feel like anything that’s happened to me over the course of my career, I’ve been really blessed.”

Songwriters in the Round will air online on May 21 at 7:00 p.m. Central Daylight Time. For more information about the event and how to donate to the Sheridan Road Charitable Foundation, visit srcfoundation.com.