Longtime Chicago restaurateurs and now business partners, Glenn Keefer and Ryan O’Donnell, aren’t letting the Covid-19 pandemic get in the way of opening their new restaurant, Sophia Steakhouse, in Wilmette. While the only traffic through the doors will be delivery and curbside pickup, the restaurant will open on Monday, May 11 with a limited take-out menu that reflects Keefer and O’Donnell’s initial vision for a North Shore steakhouse without the stuffy.

The restaurant’s take-out menu will feature items that, as O’Donnell puts it, will “travel well,” including a grilled Steakhouse burger with beef from Forza Meats in Glenview, a super-green vegetable salad, crab cakes, and Steak Sophia, a 10-ounce flat-iron steak with peppercorns and a Diane sauce. It will also offer Butcher Block Kits with four different steaks that will be seasoned in-house and ready to grill.

The idea to open a steakhouse together emerged out of friendship. Keefer first met O’Donnell’s father, Bill, in 1981 at the old Palm Restaurant on East Lake Shore Drive. Keefer opened his own eponymous restaurant in 2001, and in 2003, brought O’Donnell in part-time. The two eventually developed a strong friendship, and while both had separate business interests over the years, opening a new steakhouse on the North Shore offered the perfect opportunity to form a partnership.

“We developed a common approach to business, and I think Ryan has been incredibly successful with his neighborhood joints and the way he runs his business, like the old school way,” Keefer says. “People come in to eat the food not just to take pictures of it. Ryan came to me and said, ‘Let’s open a steakhouse up north,’ and it seemed like a natural.”

While doing delivery was always part of the game plan, Keefer says he believes the market for takeout is underserved. With Governor Pritzker’s stay-at-home order, the two partners have had to pivot to launch takeout only and to ensure safety measures are in place.

“Things change weekly, and now everyone has to wear masks and gloves, and that’s something we’re doing, of course,” O’Donnell says. “It’s important for us to be educated and important for our guests and our employees to feel safe.” 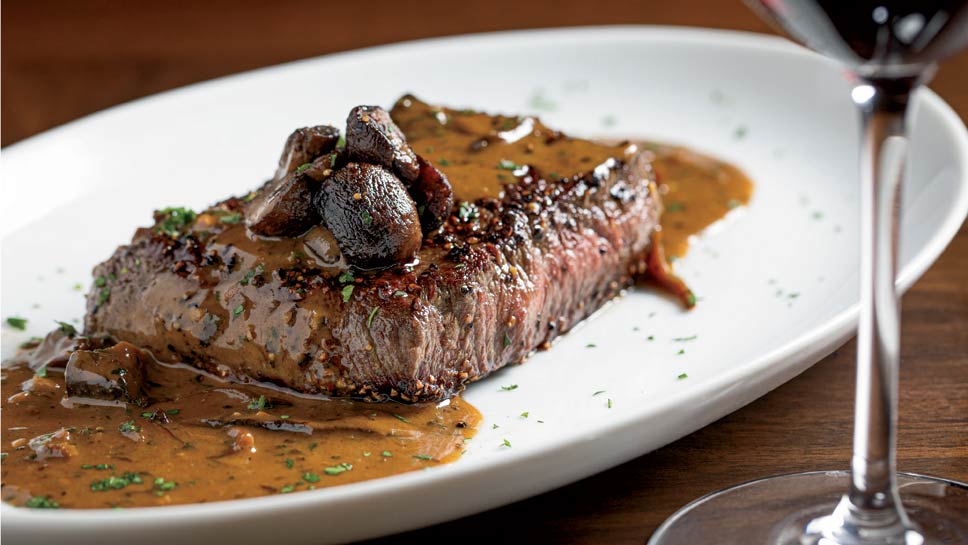 While takeout is a “whole other business model,” according to Keefer, he and O’Donnell are trying to stick to their original vision for the menu.

“Some things we might change slightly here or there, but we want to try and stay true to the dishes we were going to open with,” O’Donnell says.

Staying true to how the food is presented, even in a to-go box, is also part of Sophia Steakhouse’s plan.

“We’re really focusing on our packaging and our presentation. A lot of times, to-go programs at restaurants throw it in a box, throw it in a bag, and get it out the door,” says O’Donnell. “Knowing that this is a new business model, we’re trying to put our best foot forward on some of the finer details as far as what [the food] looks like when you bring it out of the bag and how it feels.”

While their original plan for an opening has been turned on its head, O’Donnell, who grew up on the North Shore, and Keefer, who’s lived in Northfield since 1996, are excited to be a part of the Wilmette community.

“I was putting signs in the window last night for the opening, and people were banging on the window and giving the thumbs up,” says Keefer. “There’s a vibrancy here that is kind of unique to the North Shore. What we’ve seen here in Wilmette has been really encouraging. It just feels right.”

Customers can order from Sophia Steakhouse through the app, Caviar, or by calling the restaurant at 847-728-8220, sophiasteak.com.