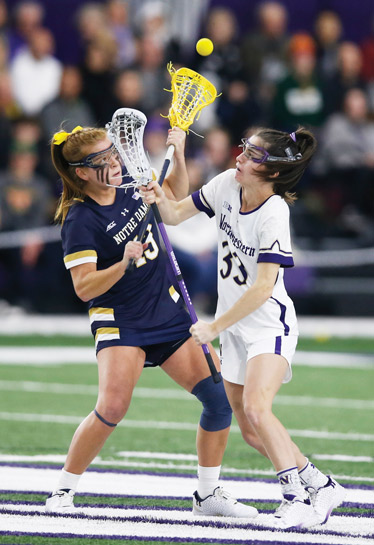 Northwestern University women’s lacrosse midfielder Brennan Dwyer left her painting of a pink castle out to dry in the Dwyer house in Winnetka last month.

“She took up painting again; she’s very good at it,” John Dwyer says, adding he and his wife, Dinny, and Brennan have found plenty of time to watch movies and engage in Wii and Uno and Clue battles at home since mid-March.

Brennan Dwyer has been home for weeks because the pandemic halted NU’s on-campus classes and scrubbed her promising junior lacrosse season on March 13.

Her take, on her painting?

“My dad was impressed?” asks Brennan, a 2017 Loyola Academy graduate and four-time Illinois High School Women’s Lacrosse Association state champion and US Lacrosse First Team All-American. “He shouldn’t have been. That painting didn’t require any skill; it was a fill-in-the-blank painting.”

Dwyer’s third lacrosse season with the Wildcats was a Rembrandt-in-the-making one before it ended, abruptly, after seven games. An Intercollegiate Women’s Lacrosse Coaches Association Third Team All-American for an NCAA Final Four team in 2019, the 5-foot-5 Dwyer ranked third in the nation this spring with 9.86 draw controls per game and set a program record with 21 draw controls (fourth all-time, in NCAA history) in a 28-12 defeat of visiting Arizona State University on February 16.

“Definitely a shock, at the beginning,” Dwyer, 21, says of learning the fate of her team’s 2020 season. “It took a while for it to sink in for me and for my teammates, though we all knew it was a possibility.

NU’s women’s lacrosse team was supposed to board a plane to Nashville, Tennessee, for a game against Big Ten foe Penn State on March 13. Time of departure got pushed back more than once.

“We talked about driving instead,” Dwyer says.

But travel talk ended when Northwestern University Athletic Director Jim Phillips informed the reigning Big Ten Tournament championship team, via email, that it would not get to compete in another game this spring. NU would have to accept a 4-3 record as a final record, against a highly challenging schedule.

“Your first thoughts, right away, are health-related,” says John Dwyer, whose daughter Kathleen gave birth to a daughter (his 16th grandchild) on April 2. “The health of your family, of your friends, of everybody. People are getting sick. People are dying. What we’re all going through right now, it deepens your faith. Our country is showing its resiliency again in the face of adversity, and I admire the approach our medical community and our country’s businesses are taking.

“This COVID-19 virus … it’s tricky,” he adds. “We’re so used to attacking something to defeat it. But it’s hard to do that when so many of us have to stay home. Brennan and her teammates are strong, committed to staying together and supporting each other. It’s a pretty driven group of athletes.”

Coach Dwyer’s athletes at Loyola Academy were scheduled on April 2 to board a plane for Washington, D.C., for a multi-game trip against several of the nation’s best prep girls lacrosse squads. They stayed home instead. The Illinois High School Association (IHSA) had suspended all sports activities through April 30.

May 1 is the target date for the return of spring practices. But state governmental, educational, and health bodies have to approve the resumption by late April. State postseason series would be extended following truncated regular seasons.

“I must commend the IHSA for giving us hope,” John Dwyer says. “Our kids—they’re hopeful and working out on their own.”

Brennan Dwyer, meanwhile, is pulling for any kind of Ramblers girls lacrosse season this spring, especially when she thinks of Loyola Academy’s seniors.

“Girls lacrosse at Loyola Academy is such a special thing,” says Dwyer, who averaged 10.1 draw controls as a senior at the Wilmette school and amassed 395 goals, 239 assists, 276 ground-ball controls, and 876 draw controls in her prep career. “I felt honored to be a part of it every season. My hope is, if the season does get canceled, the seniors will look back and know they had three years to make and develop connections with teammates that they’ll never forget.”

A communications major and business minor, Dwyer earned Big Ten All-Academic honors last spring and followed that up with Dean’s List numbers (3.9 and 4.0 grade-point averages in the fall and winter, respectively) as a junior. The school’s spring quarter started on April 6.

Dwyer will have to settle for resorting to her classroom ‘A’ game only in the spring and summer quarters.

“My teammates and I will go into next season with a different view,” Dwyer predicts. “We’ll be grateful, more than ever, to play the sport we love.”