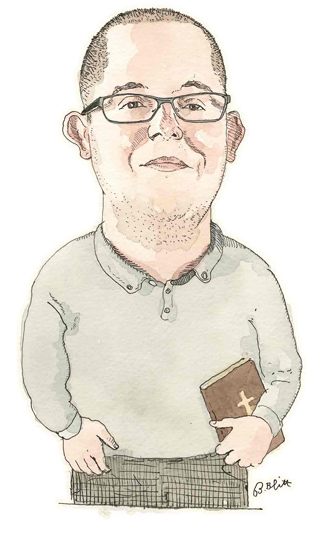 His outgoing personality forced his chemistry teacher to assign the youngster to another seat.

And that led to bliss.

“I was talking too much in class one day,” recalls Rodriguez, the second-year director of student ministries at North Suburban Evangelical Free Church in Deerfield.

The chair change landed “A-Rod” (yes, he answers to that nickname, too) next to a girl named Margaret. They talked, mostly after class. They got to know each other. They dated.

Rodriguez, 35, is putting his voice to good use today, as his loved ones and North Suburban Church parishioners seek a source of comfort amid the harrowing pandemic. Uncertainly, seemingly, reigns every waking hour.

“Fear,” Rodriguez says, “can be a good thing. It makes you aware. In this case, it makes you aware we are living in a broken world. Fear also brings you closer to God. God is in control of all things.

“None of us,” he adds, “knows the mind of God. But it’s important to know His character. He loves. God is good and gracious. God is wise.”

Rodriguez dearly misses daily face-to-face moments with North Suburban Church members ever since COVID-19 began to significantly alter lives and anchor most residents at home for at least 96.3 percent of each day. He won’t see those faces on Easter on April 12, much to his dismay; the church will Livestream its worship service at 10:30 a.m.

“Our people here … they are loving and caring, and they have such a sense of community,” Rodriguez says. “You feel that as soon as you see them when you walk into any room. They show grace—extravagant grace. What I’m hearing them say to others [since the onset of the coronavirus pandemic] is, ‘Hey, who needs a meal?’ I also hear, ‘Hey, we love you, this is our family, and we’re praying for you.’ ”

Easter messages abound worldwide, and they’re resonating profoundly for Christians this Holy Week. Rodriguez, in his former life, was an atheist, “a hardened atheist, because I researched atheism,” he clarifies. An English teacher at Wauconda High School and a counselor at Trinity International University in Deerfield guided Rodriguez to the path to pastorship.

“I didn’t find faith until later in life,” says Rodriguez, who, on August 1, plans to join The Orchard Evangelical Free Church’s Arlington Heights campus, where he’ll be mentored by senior pastor Colin Smith. “I found faith, after returning to the Chicago area [following a three-year stint with the U.S. Army, in Seattle, Washington]. My English teacher had handed me a Bible. I read the New Testament, thinking I could disprove it; I couldn’t.”

Among the Biblical passages that hit Rodriguez hard was John 14:6: “Jesus said to His disciples, ‘I am the way, the truth, the life.’ ”

“The message of Easter, first and foremost, is love,” Rodriguez says. “Hope is also a big part of the message. Jesus’s resurrection was a victory over death. Death is all around us today, because of the pandemic, and that has generated fear. I work with teens at church. Some are angry, because of job loss or sensing they won’t be able to attend their high school graduation ceremony. Many are afraid of getting sick and dying.

Rodriguez started as a literature major at TIU before his counselor suggested a shift to Biblical Studies. He did just that, graduating with high honors, and then he graduated with high honors at Knox Theological Seminary in Fort Lauderdale, Florida.

“I was a horrible student in high school,” admits Rodriguez, a target of professional baseball scouts when he gobbled up grounders and ripped doubles for WHS Bulldogs teams. “Only baseball and my girlfriend mattered to me back then.”

Rodriguez could not have picked a better time than now to devour the latter.

“Can we face death and find hope?” author Jen Pollock Michel writes in a book review. “According to Matt McCullough, yes. Remember Death rightly reorients us to the impermanence of this world and the brevity of our lives, witnessing to the paradox that grief is necessary for faith.”

Alex and Margaret live in McHenry with their children, 16-year-old Arianna and 6-year-old Alex, and his stepdaughter, 12-year-old Angelina. Margaret works as a part-time clerk at a grocery store.

“My wife,” Rodriguez says, “is working on the front lines of the COVID-19 pandemic.”

An avid Chicago Cubs fan since the day he first turned a double play, Rodriguez pines for the start of the MLB season. Maybe it’ll happen in May. Probably later. Hope. Rodriguez owns scads of hope. He still throws a baseball around occasionally, still punishes baseballs in batting cages.

The topic of his opportunity at The Orchard resurfaces.

“The Lord opened a door for me,” Rodriguez says. “I’m thankful for that; will always be thankful for the chance to fine-tune and sharpen my commitment to serving others during a pastoral residency. But I’m also heartbroken, because I love all of my students and our families at North Suburban. God gave me the capacity to be useful as a preacher and a teacher at a special place.