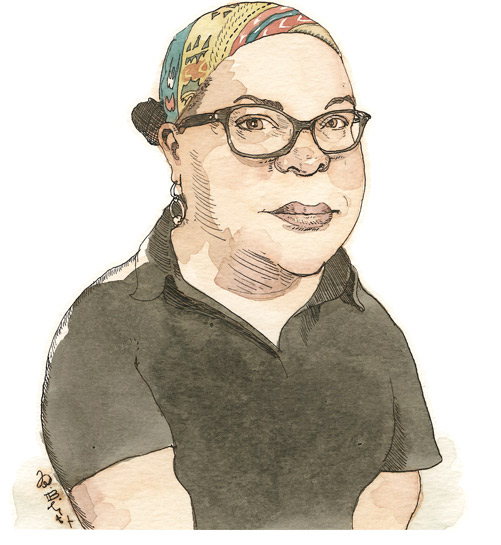 If anybody could pull off hosting a pizza party for children and turning it into a fun, impromptu geometry lesson—pizza slices are yummy triangles, right?—it would be Erika Gray.

The director of education at Kohl Children’s Museum in Glenview since 2008 and an education associate at the museum from 1998-2007, after all, has worked for only one other company in her life.

“Pisanello’s Pizza in Bowling Green, Ohio, when I was in high school and college,” says Gray, who turned 47 on March 30. “I worked in the kitchen first, before becoming a shift manager. I worked under pressure, in a college town, at a place that was open until 2 a.m. on the weekends. It was demanding, insane at times. But I learned all about the importance of communicating and teamwork during my time there.

“And I still love pizza.”

The mother of 6-year-old twins Keaton and Leilah also still loves serving at Kohl Children’s Museum, or, “The Place Where Awesome Lives.” Its mission: Provide experiences and memories to build a foundation for a lifetime of learning. Its vision: Be an essential leader in providing playful experiences that inspire every child.

Founded in 1985 as an extension of the Kohl Teaching Center in Wilmette, Kohl Children’s Museum offers 17 interactive, hands-on exhibits for children ages birth to 8. All exhibits and programs are aligned to the Illinois State Learning Standards and are designed to nurture a love of learning in young children.

The museum is temporarily closed because of the coronavirus outbreak, but its education mission is immune, forever. Check out the museum’s remote learning sites (Home Zone and Story Time) at kohlchildrensmuseum.org. Content is updated daily.

“Opportunities for children to be excited about learning—that’s what Kohl Children’s strives to provide,” says Gray, who lived in Rogers Park and Evanston before moving to Zion with her husband, Chris (a chef and a native of Jamaica), and children in 2014. “The children in our programs and initiatives often have no idea that they’re learning while playing. We want them to understand the fundamentals of subjects, like math and science, in a fun setting so that once they’re in a classroom setting, they’re not unfamiliar with many of the concepts being taught.”

Curiosity. Imagination. A sense of discovery.

Kohl Children’s Museum aims to ignite all of the above in each child it welcomes. Gray and her colleagues supply youngsters the tools to explore and experiment and ask questions in a safe and fun environment.

They also value evidence that their children are absorbing information—and having a blast at the same time. Gray, an avid photographer, captures that regularly via photographs and videotape.

“Our science outreach team wants to make the discovery of science more inviting for children,” says Gray, adding the museum collaborates with a number of schools, childcare centers, and local community organizations, including Lake Bluff-based North Chicago Community Partners. “We introduced digital microscopes to a room filled with 3- and 4-year-olds not too long ago. They were excited. I wish you could have seen their faces. They had that ‘Oh my gosh’ look, or that look you get when you’re having an ‘Aha’ moment.

“I consider photography a teaching tool,” she adds. “I use it to document things, to record scenes. Children love seeing themselves when they’re learning.”

Students from Romona Elementary School in Wilmette enter Kohl Children’s Museum each school year and exit it with wider eyes.

Gray majored in art education at Bowling Green State University. She took art history classes and studio art classes. That smiling, terracotta dinosaur, the one she created in ceramics class way back in the third grade? She still has it. She took ceramics classes at Robert Crown Community Center in Evanston for 10 years.

“I took Beginning Ceramics classes there, every year,” recalls a laughing Gray, who’s in grad school today, working toward her master’s degree in Early Childhood Education (with a concentration in Leadership and Advocacy) at Erikson Institute in Chicago. “They were great, my ceramics teachers. They let me do anything I wanted to do in those classes.”

Gray was adopted by Fred and Kathryn Miller, and her parents now live less than a mile from the Gray family in Zion. They staged a St. Patrick’s Day scavenger hunt for their grandchildren last month, allowing Gray to tackle school and work projects in total peace. Kathryn served as a nurse, as a member of the U.S. Army Reserve, and as a masseuse in Ohio. Fred, a retired Bowling Green State University philosophy professor, remains active in the Social Philosophy and Policy Center that he and other BGSU faculty members founded in 1981.

“My mom,” Gray says, “wore many hats. My dad loved what he did as a professor. His advice to me, when I was young, was, ‘Figure out what you love to do and never give up hope while you’re looking for a position in that profession.’”

Gray was visiting her brother, Justin, in Rogers Park when she saw an ad in The Reader for a job opening at Kohl Children’s Museum more than 20 years ago. She waited a week to hear back from the nonprofit; she heard nothing.

Gray then returned to Ohio, where, on her first day back in The Buckeye State, she received a phone call.

Personnel at Kohl Children’s wanted to interview Gray. Not on the phone.

The former pizzeria employee has been delivering for Kohl Children’s Museum ever since.