That took a back seat—and, later, a spot in the trunk—to an outbreak that had reached pandemic proportions.

Days after overwhelming Niles North High School 48-24 in a Class 4A Elk Grove Sectional boys basketball semifinal at Robert Morris University in Arlington Heights on March 10, Loyola Academy’s top-seeded Ramblers had to absorb some tough news: They would not get to face third-seeded Evanston Township High School in a sectional final on March 13.

The Illinois High School Association had cancelled the rest of the postseason for teams in all classes—1A through 4A—amid concerns about the COVID-19 (coronavirus) outbreak.

“We were all devastated by the news,” said Loyola Academy coach Tom Livatino, whose 30-4 squad had a legitimate shot at advancing to the Final Four in Peoria. “We understood why the decision was made.

“We love these guys, this team. We are proud of the people they are and of their commitment to shared excellence.”

Their brilliant defense, once again, stifled and frustrated a foe in what turned out to be the final prep game for nine Loyola Academy seniors. The Ramblers led 14-1 after one quarter, 24-8 at the half, and enjoyed cartoonish advantages of 31-9, 40-15, and 44-17.

Many claim defense is all about attitude. But Livatino said his all-in, buy-in hoopsters hit the court with other immeasurable attributes.

“It’s also the way we guard, along with the system behind it,” Livatino said after the sectional semifinal. “We don’t guard individually; we guard as a team. And it’s about the guys, collectively—they’re great guys, uncommon guys. They’re not normal high school players, and we take pride in that.”

In its three playoff games this winter, Loyola Academy allowed an average of 23 points. That’s not a typo.

Elk Grove High School scored only 20 points in a 38-point loss to Loyola Academy in a regional semifinal on March 3.

“If you don’t play good defense, you don’t play in our program,” said Ramblers junior guard Vaughn Pemberton, who scored a game-high 15 points against fourth-seeded Niles North and nailed a three-pointer that capped a 7-0 run at the 3:49 mark of the third quarter. “I found that out back in my freshman year. Having a strong defensive mentality, it’s what makes us tough We practice as hard as we play. Our practices are the same as our games—exactly the same.

With his team up 16-1 last week, Livatino— animated, fiery, passionate, laser-focused— coached like LA was trailing 16-1. It’s what he does in each game, no matter the score.

He cares, deeply, as a coach and as a teacher. Every. Single. Possession.

“In order to be successful, you have to sacrifice some of yourself for the betterment of the team,” Livatino said after finding out his Ramblers wouldn’t get the opportunity to defeat Evanston—a Final Four team in each of the past two seasons—for a second time this winter. “This is a very special group of guys, our seniors. They are championship people—the best is yet to come for all of them.” 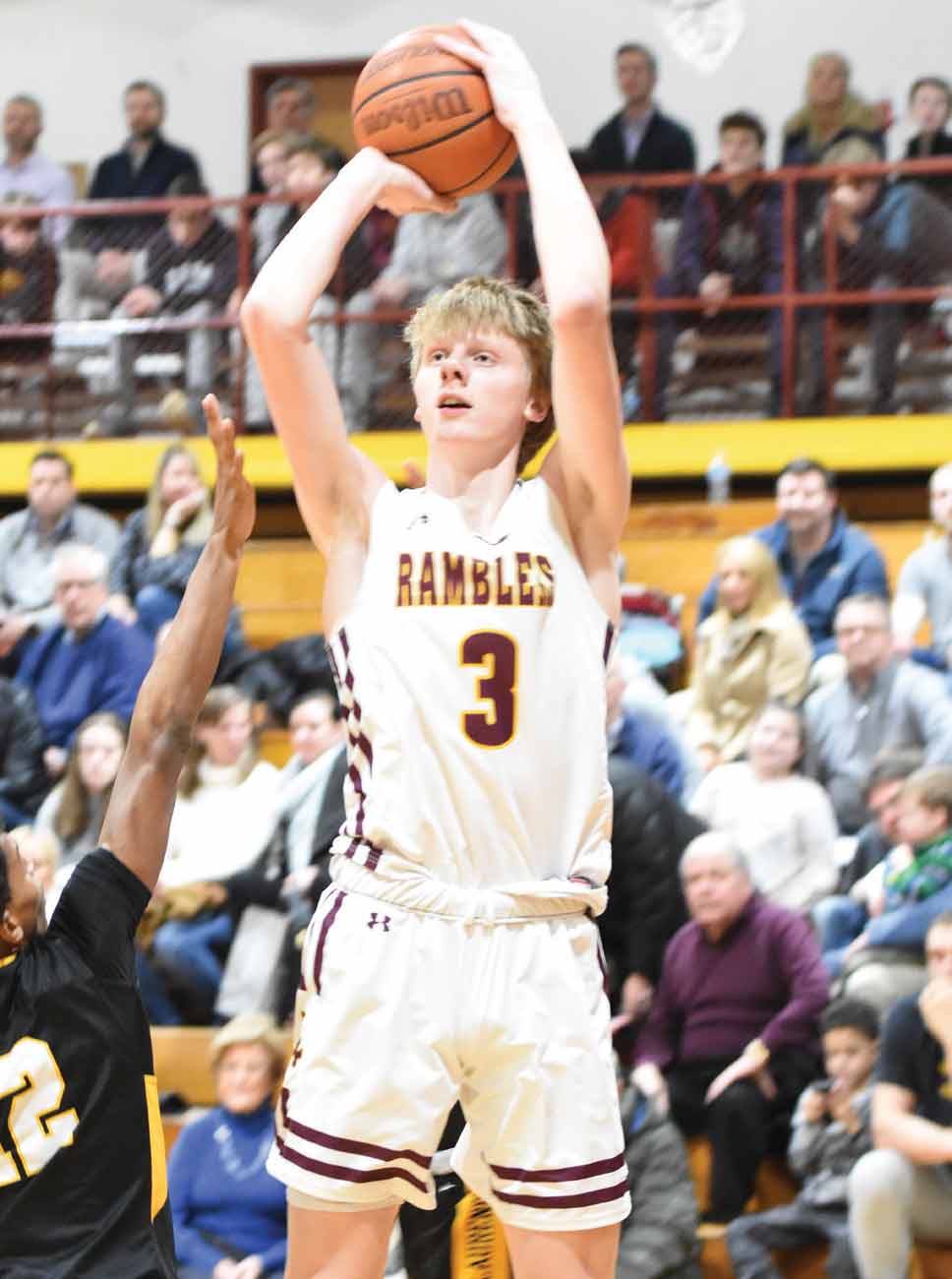 FROZEN, IN PLAYOFF TIME: Loyola Academy senior forward Bennett Kwiecinski, seen here in a
regular-season game against St. Laurence, scored nine points and grabbed six rebounds in the
Ramblers’ 48-24 defeat of Niles North’s Vikings in a Class 4A Elk Grove Sectional semifinal last week
in Arlington Heights. It was LA’s 30th—and final—win, because the IHSA cancelled the rest of the
playoffs due to the coronavirus outbreak. PHOTOGRAPHY BY BRAD HOKIN/GLORY DAYS PHOTOS

Enghauser opened the scoring with a threepointer 39 seconds after tipoff. Ramblers senior guard Will Pujals (six points) followed suit 22 seconds later, and Livatino’s boys were off and running—and dominating.

Pujals’ second three-pointer of the night highlighted a lengthy, textbook possession near the end of the first half. Rambler after Rambler delivered sharp pass after sharp pass along the perimeter and to the corners, as each disciplined, selfless player worked, worked, and worked some more for an open shot.

Pujals drained the triple with 59 ticks left before the break.

Days later, Livatino was asked to come up with his favorite moment of the season.

He couldn’t narrow it to one.

“Every day,” the coach said. “To be around this team, these guys, was a reward. The journey with them was a reward, too.

“I look forward to being connected with them, as friends, forever.”