The Reverend Jihan Murray-Smith is a city girl at heart. Outside of her college years, she is proud to be a born and bred Chicagoan—she even jokes that as a child, Thanksgivings in Naperville were considered a dreadful faraway journey.

So when the Reverend N. Luke Back of The Church of the Holy Spirit (CHS) invited her to lunch in his Lake Forest neighborhood last year, she accepted without any knowledge of what was to come.

“I was expecting to meet a new friendly colleague over lunch in a new community,” says MurraySmith. “But I have to tell you, as soon as I arrived in the Square, I wanted to turn around and get my husband. I thought, ‘Oh my God, he would so love it here.’ It looked like the set of a Hallmark movie.”

At the time, Murray-Smith, who had previously served as Deacon at her home parish, Messiah-St. Bartholomew, and The Church of the Atonement, was wrapping up her term as Deacon at St. Chrysostom’s Chicago. She didn’t expect that a casual meal at Market House on the Square would eventually turn into an offer from Father Luke to join the staff of CHS.

“My last day at St. Chrysostom’s was June 9, and my husband and I left Hyde Park on June 10,” she says. Today, Murray-Smith serves CHS as a Deacon and Seminarian-in-Residence.

“You just never know … I was one of those people who always said I would never live in a suburb, but God has a sense of humor. And I will say, CHS has been so intentional about making my husband and I feel welcome and comfortable. They really go above and beyond to display hospitality.”

Murray-Smith’s path to CHS—or as a deacon in general—was unexpected. Growing up with a mother who was an actor and a father who was a theatrical director, her earliest childhood memories were backstage at the Goodman and Victory Gardens theaters, running lines with performers and getting behind-the-scenes access to big productions.

She attended Fisk University in Nashville, where she was a fifth-generation family member to attend the HBCU (Historically Black College and University). She majored in dramatics and speech with a concentration in theater. On weekends, she followed in her mother’s footsteps and performed with the historical Fisk Jubilee Singers—an a cappella ensemble that performs spirituals originally sung by enslaved Africans prior to the Civil War. The experience provided the opportunity to tour around the country, and even opened the doors to a gig as a background vocalist for Neil Young. 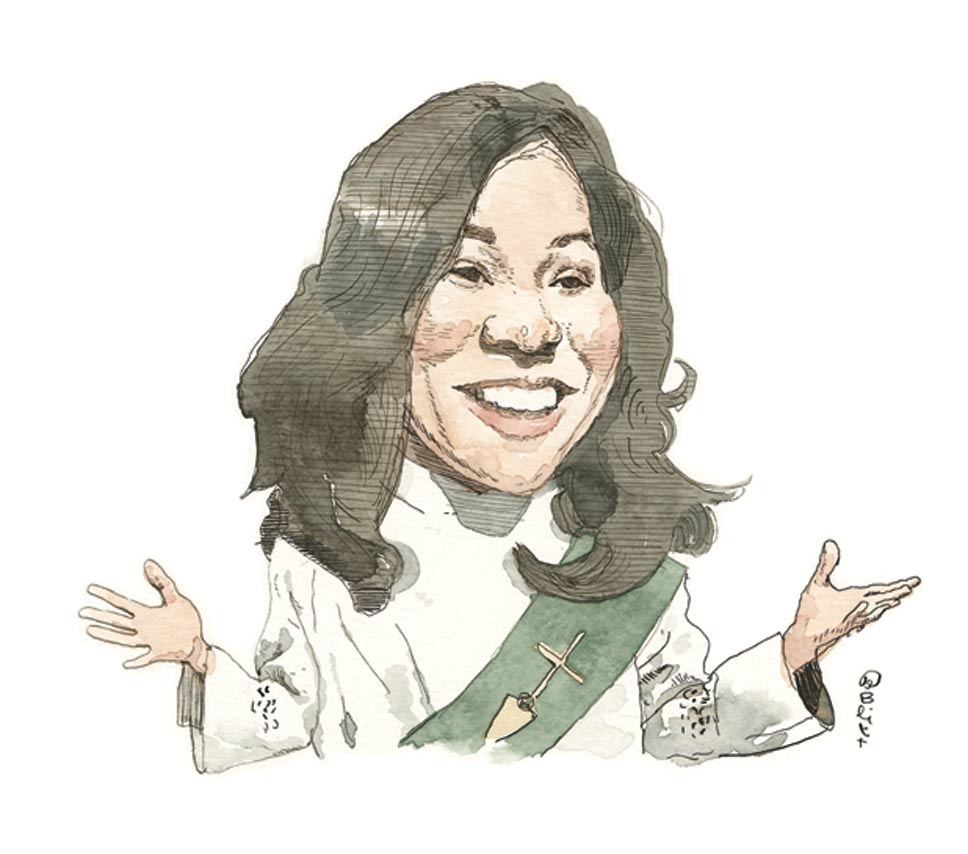 After graduation, Murray-Smith returned to Chicago and worked as a job readiness trainer. “It was flexible,” she explains. “If I had a quick audition, I could go because I was in the Loop and it was usually a quick cab ride away.” She found work doing voiceovers and even shot a TV pilot, but then her career took another unexpected turn.

While training young adults at her day job, she noticed a void in the market for etiquette instruction. “I had very formal grandparents,” she says. “And by the time [my peers] and I were juniors in college, we noticed we had quite a few peers who were uncomfortable in formal environments. So a friend and I partnered with Fisk University’s Office of Career Development and started a group called White Gloves and Silver Spoons.”

When she returned to Chicago, MurraySmith used that experience to establish Tea & Crumpets Chicago, an etiquette and public speaking consulting group for children and young adults. She earned contracts with schools and partnered with the Illinois Restaurant Association to train students looking to work in Chicago’s culinary and hospitality management industry.

This is all to say that ordained ministry leadership was never part of her plans.

“Faith has been one of the main constants in my life,” she says. “I have always been involved in the church. But I never had the desire to be ordained I didn’t see it in the picture. I was content with being an active lay leader.”

Around 2009, Murray-Smith took a class at the Lutheran School of Theology in Hyde Park “out of pure curiosity and interest in self-development.”

“I think other people noticed something in me that perhaps I didn’t see in myself,” she says. “My mentor, the late Elaine Bellis [Archdeacon of the Episcopal Diocese of Chicago] said, “You’re going to be a deacon. Go to deacon’s school.” It was a threeyear program, so I said I’d take a couple of classes and see where it goes—I wasn’t sold.” Mur – raySmith explains that deacons normally take one of two tracks: the vocational diaconate or the transitional deaconate.  The first is to remain bi-vocational, the other is to prepare for a life in the priesthood. She opted for the former.

“You don’t get paid as a Deacon,” she says.  “You proclaim the Gospel, occasionally preach and lead a ministry that brings the world to the church or the church to the world. Deacons minister and bridge the gap between the two, but we also have 9-to-5 jobs. I thought my life would be auditions, Tea & Crumpets, and business expansion.”

“My calling has been gradual, like the story of Jonah and the whale,” she says. “I want to go one way and God says, ‘That’s what you think you want, but I’m going to put you where you need to be.’ So now, with great joy, I am in the process of transitioning to the priesthood.”

For now Murray-Smith and her husband, Jason Henderson, a strategist for Blue Cross and Blue Shield of Illinois, are enjoying their time in Lake Forest. She is completing her studies at Bexley Seabury Seminary to earn her masters of divinity; preaches regularly, and is a liaison between CHS and their sister-parish, Nuestra Senora de Guadalupe. Murray-Smith enjoys planning events such as the ecumenical Martin Luther King, Jr. Day celebration, and hopes to plan more collaborative events in the Lake Forest and Lake Bluff community