It’s the start of the final 10-minute segment of a weightlifting session at Loyola Academy. Swimmers stop what they’re doing and proceed to focus on strengthening their arms—nothing but their arms.

Welcome to the Ramblers’ “Arm Farm.”

You wouldn’t hear an oink inside the room.

But you’d likely absorb a haphazard chorus of human grunts.

“Curls, we’d do those,” Ramblers freshman Rex Maurer said after the boys swimming and diving state meet at Evanston Township High School on February 29. “We’d work on triceps, too. Then, we’d hit the pool for the start of practice.”

“Our guys went out and raced,” Hengelmann, standing poolside after the trophy presentation, said. “Our goal Friday [during preliminaries] was to win some heats and put ourselves in positions to score major points on Saturday. We did that. We came here and took care of business behind a lot of special swims.”

It was beyond special. It supplanted the state record (1:35.6) former New Trier star Reed Malone had set in 2013.

The Stanford University-bound and reigning state 200 free champion Luke Maurer didn’t lower his mark in the next day’s finals session, but his 1:36.35 clocking topped a field that included Rex Maurer, who touched fifth in 1:39.33.

“Exhilaration,” Luke “The Farmer” Maurer said of his feeling at the sight of the recordsetting time on the natatorium’s scoreboard. “But I wasn’t happy for myself; I was happy for our team. It fired the team up early, in our second swim of the prelims.

“It’s much more exciting when you do some thing for the team,” he added. 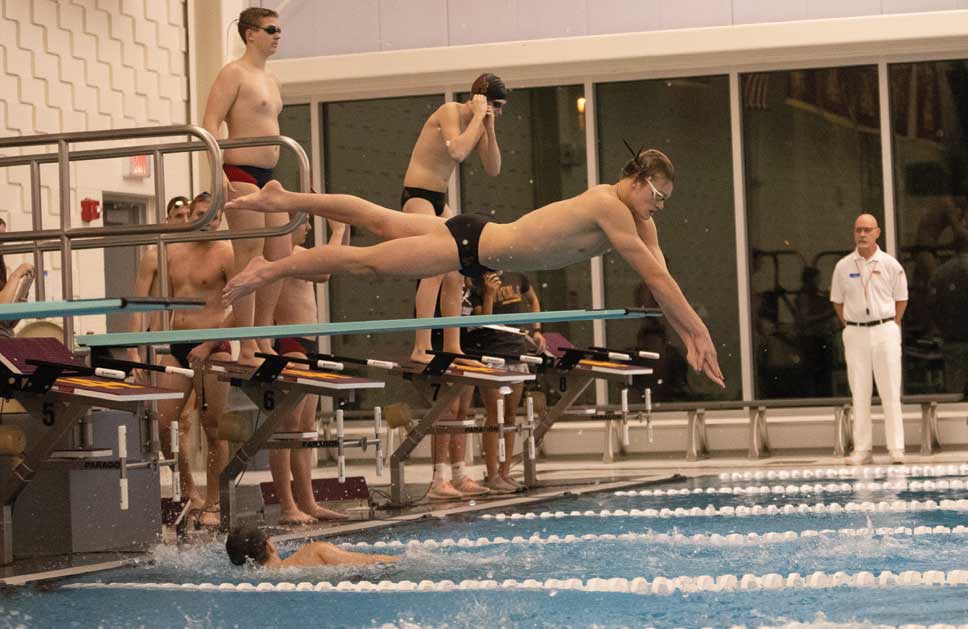 Rex Maurer and senior teammate Everet Andrew were seeded second and first, respectively, in the ‘A’ final of the 500 free. Second at state in the event last winter and committed to study and swim at the U.S. Naval Academy, Andrew—the program record holder in the grueling distance race—oared his arms to the gold medal with a time of 4:24.5.

“I told Rex, before the race, to relax and have fun,” said the 6-foot-4, 185-pound Andrew. “At this meet last year, while racing against bigger guys, I thought way too much. I thought very little this year. My thinking today was, ‘Go out, have some fun, and rip it.’ ”

The team race at state, particularly near the end?

Loyola Academy trailed St. Charles North 117-103 after 11 of the meet’s 12 events. Glenbrook South was in third place, with 102 points. Had LA finished first and St. Charles North placed sixth in the meet’s final event, 400 free relay, the schools would have shared the state championship.

“Our group of guys, it’s something special,” said Andrew, who also placed sixth in the 200 IM (1:53.74) and watched his little brother, sophomore Lachlan Andrew, anchor the 200 free relay to runner-up honors (1:23.59, with Luke Maurer, Rex Maurer, and Kelly) at state. “It’s a tight-knit bunch of good dudes, a band of brothers.”

The Andrews’ sister, UCLA junior Olivia Andrew, swam at the PAC-12 Women’s Swimming and Diving Championships in Federal Way, Washington, last weekend and zipped to a personal-best 50.09 in the 100 free.

Olivia Andrew had played an integral role in the fall of 2014, when Loyola Academy’s girls swimming and diving team—coached by Hengelmann—claimed its first state championship.

That meet was also staged at Evanston Township HS.

“I was here for that,” Everet Andrew recalled, his infectious grin expanding to the width of a swimmer’s lane. “I was 5-foot-11 then.

“Pretty scrawny, too,” the Rambler added.

Interested in studying engineering in college, Obochi, the reigning Highland Park Sectional champion in both events, motored to a 50-free time of 20.77 in the state prelims on February 28.