Jack Malloy, shooting a basketball while sporting a blank expression.

The 6-foot-3 Malloy is good, very good, at his craft. Assertive and certain and coolheaded, too. If miens could talk, Malloy’s—while elevating swiftly and assuredly for a shot—would announce, “The ball you see in my hands will hit nothing but twine.”

“Jack,” Scouts boys basketball coach Phil LaScala says, “is playing with a lot of confidence. He had struggled with his shot at the beginning of the season, but that was due mostly to his injured ankle. He started to find his rhythm right after Christmas, right about the time all of our guys started to defend well.

“I like everything about Jack’s game,” added LaScala, whose club improved to 18-11 with a 2-1 record in five days last week. “He takes the ball to the hole, he’s ready—always ready to shoot—and he’s aggressive. I also like his nose for the ball, the way he goes after rebounds with both hands.”

Both hands. Funny he’d mentioned those. And fitting. Malloy deserved rounds of deafening applause for his effort in a tough 56-54 loss to visiting Zion-Benton High School on February 18, in addition to his significant contributions in the Scouts’ pulsating 54-53 overtime defeat of host Libertyville High School three days later.

Malloy poured in a game-high 20 points to go with his nine rebounds against the Zee-Bees and followed that up with a 16-point night versus the Wildcats, who had received the No. 4 seed in the Class 4A Prospect Sectional earlier in the week.

No. 23—Malloy’s jersey number—struck for 11 of LF’s 15 points in the third quarter of the Z-B game, with nine of them coming from three-point real estate. He would finish with four treys.

“I worked on my three-point shot a lot in the offseason,” says Malloy, who also tallied 20 against North Suburban Conference leader Stevenson High School in the Scouts’ biggest win to date in the 2019-20 season; that loss was the Patriots’ lone NSC setback through February 24.

Some 72 hours later, against Libertyville on Libertyville’s Senior Night, February 21, Malloy netted eight of the Scouts’ first 10 points and halted a nearly four-minute scoreless stretch in the fourth quarter with a bucket at the 2:46 mark. 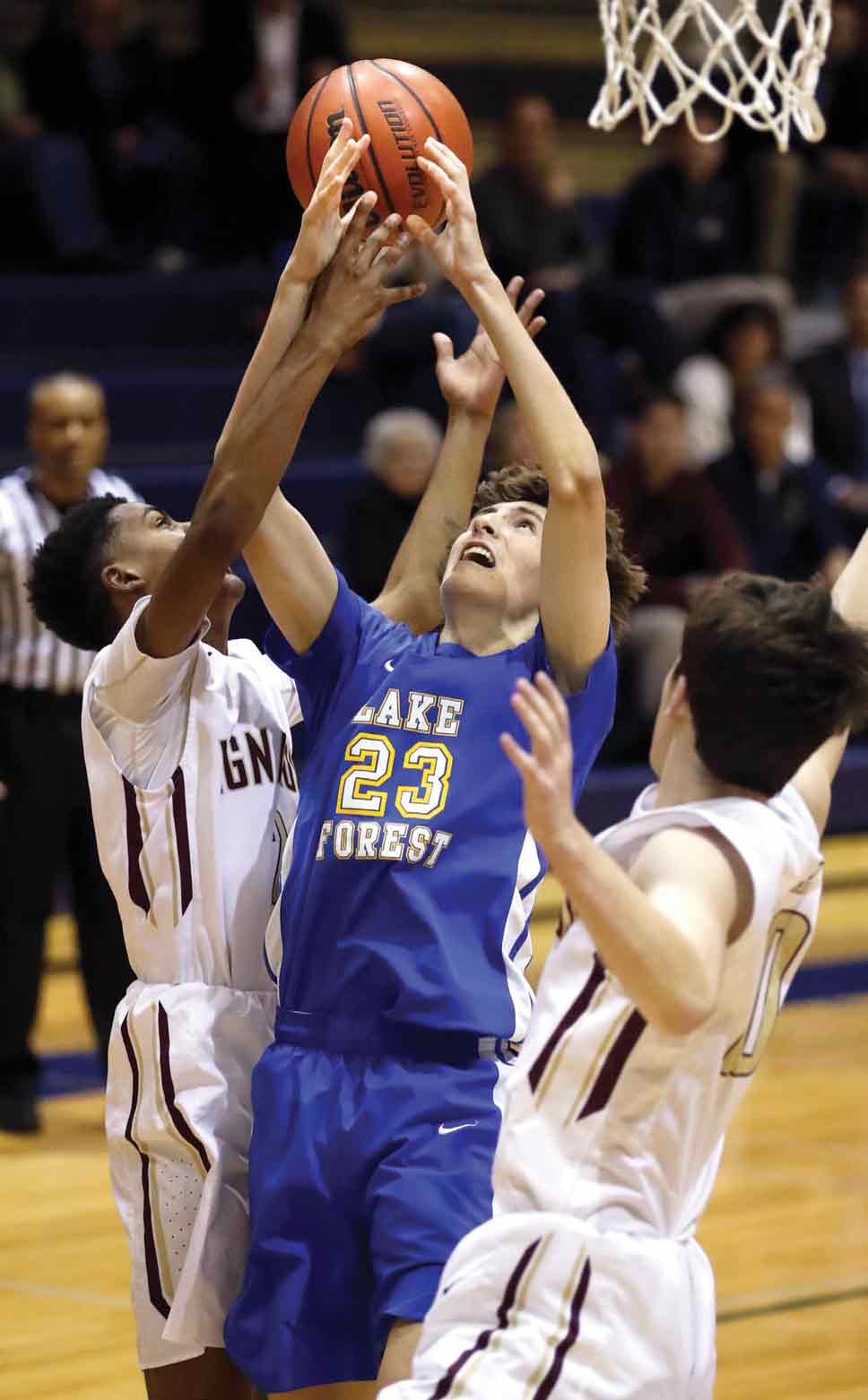 The drought buster upped the visitors’ lead to 42-39, and Lake Forest appeared to be well on its way to a tidy triumph when standout 6-4 freshman Asa Thomas (16 points) expanded the advantage to six points via his third threepointer of the game.

But the ’Cats (18-10) refused to wilt, getting a pair of clutch triples—in an 11-second span— from senior forward-center Will Moore (gamehigh 18 points) to force OT.

LF sophomore guard Cade Nowik (8 points, each coming after intermission) opened the four-minute extra session with a pair of free throws. Libertyville answered with four consecutive points, before Nowik—on a designed play, with 28 ticks remaining—nailed a lengthy, fade-away three-pointer near his team’s bench.

Moore sank two freebies at the other end to put his team up by one, setting the stage for more drama on Lake Forest’s final possession.

Hand an Obie Award to Grant “The play’s the thing” Kaus.

The 6-foot Lake Forest guard entered the paint fearlessly and scored the game-winning basket on a runner with three seconds left.

Libertyville took the final shot in the thriller—and nearly triggered euphoria from its raucous faithful. But Moore’s corner three-point try bounced off the back of the rim.

Lake Forest improved to 8-5 in the NSC; Libertyville fell to 7-6.

Nowik grabbed a team-high eight rebounds, including five after halftime. Thomas scored 13 of his 16 points in the middle quarters and made scores of LFHS fans marvel, at least 16 times, “Can you believe we get to cheer for this promising player for three more seasons?”