While Evanston has no shortage of fabulous restaurants, few are more convenient for a “date night” than Furious Spoon, a popular Tokyo-style, “hip-hop ramen” joint. 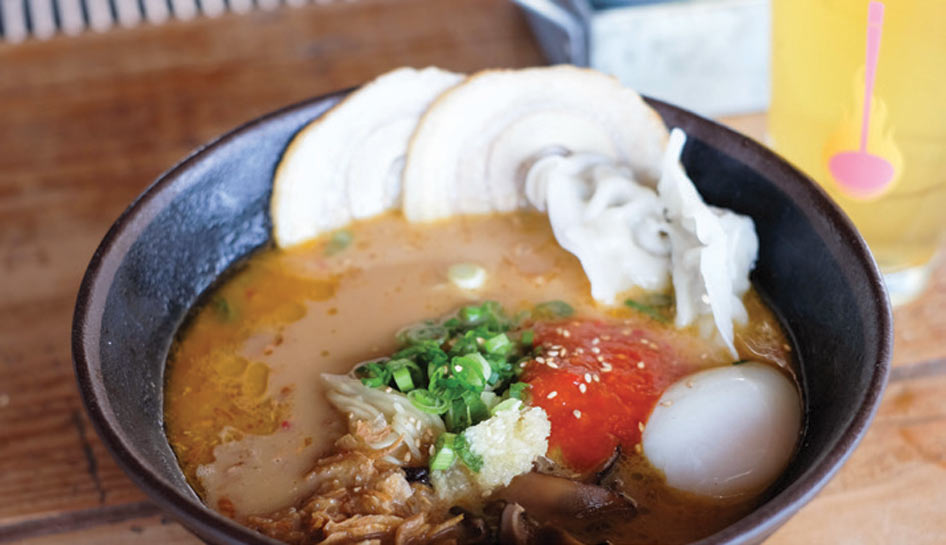 The Furious ramen, a signature of the
restaurant, is made with spicy miso pork broth
and house-made noodles 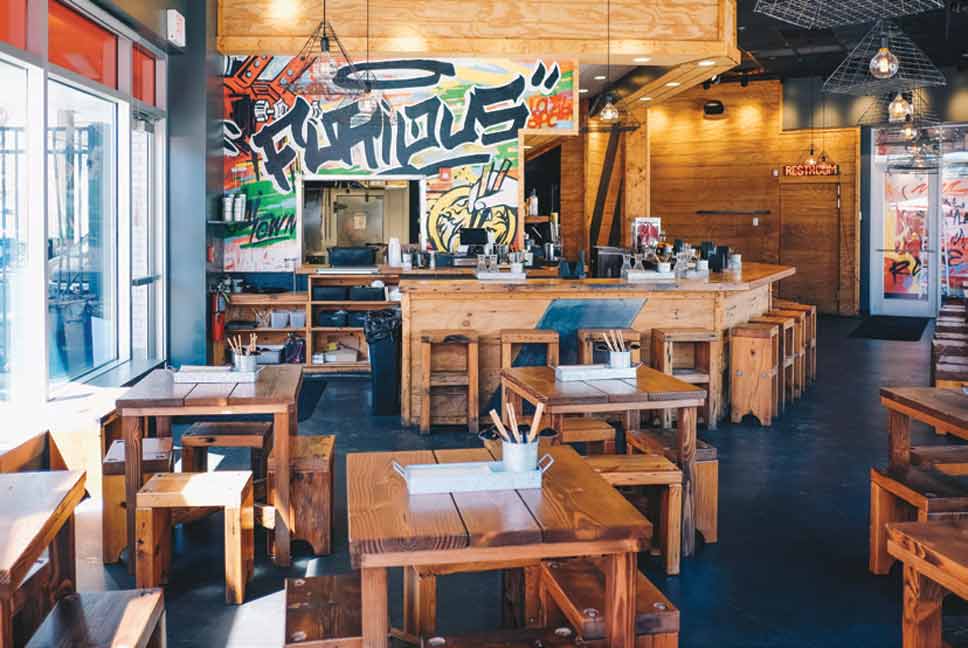 The dining room at Furious Spoon.

Inspired by his grandfather’s ramen business in the port town of Hokkaido, Japan, Thompson’s take on the concept came with a ’90s underground hip-hop music vibe and an eclectic cocktail menu. The name was meant to educate guests on the “culturally proper” way to eat ramen, and that is furiously (slurping so fast that the noodles don’t overcook in the hot broth).

And furiously they did consume in those early years, as the Wicker Park location would often sell out of those homemade noodles and have to close early.

With guidance from Managing Partner Anshul Mangal, Furious Spoon grew and added several more city locations—standing out above the rest by evolving with customers’ changing needs and requests.

That evolution resulted in some notable upgrades and innovations at its Maple Avenue restaurant in Evanston, as well as the other outposts in the Chicago area. In a clear departure from its modest, counter-style roots, the restaurant has introduced a more traditional, full-service format. However, the new configuration of dining furniture doesn’t take away from the authenticity of the cuisine.

The star of the show at Furious Spoon has always been the ramen, using noodles that are house-made with an antique noodle-maker imported from Japan. With creations such as The Mother Clucker Ramen (chicken shio broth, honey-ginger chicken breast, crispy shallots, Thai basil, and lime) and the Shrimp Dynamo Ramen (veggie shoyu broth filled with chili-infused noodles, sweet-chili shrimp, miso, fried green beans, and Fresno chili), it’s hard to know which to choose.

We opted for the “classic,” and the most popular ramen dish on the menu—The Furious, with an accent on The. It was easy to see why this has become the go-to. A spicy miso pork broth is loaded with housemade chashu (pork belly), steamed chicken and pork dumplings, crispy shallots, garlic relish, marinated mushrooms, “fury sauce”, and a poached egg.

We also indulged in an ambitious tasting of some appetizers and small bites.

How could you not start with the togarashi spiced edamame, a lively take on the Japanese staple with the addition of salt, lime, and a burst of flavor? The second course of apps included the panko-crusted Crab Bomb (lump crab served with scallion aioli); spicy marinated cucumbers; and chicken and pork dumplings, served with a chili ponzu sauce.

While the cocktail menu often shares double billing with those slurp-worthy bowls, we opted for something simpler to wash down such a diverse explosion of flavors—Furious Spoon’s own brew.

Given Evanston’s unofficial reputation as the microbrewery capital of the North Shore (we count Temperance, Sketchbook, Smylie Brothers, just to name a few…), the Furious Spoon lager was a refreshing and tasty surprise. It’s made by Empirical Brewery in a Japanese style, which is to say it’s unfiltered for extra body.

If this latest evolution is any indication of what Thompson has in store for the next decade, we think Furious Spoon is here to stay.