Rachel Zun hunched over slowly and grabbed both of her knees.

The New Trier senior gymnast then held that pose for a good 10 seconds. Zun—having fallen on her first vault attempt at the Mundelein Sectional on February 13—had just landed her Tsuk pike vault on her second try.

Her knees were fine.

It was barking. Loudly. The Trevian had sustained a pair of partially torn ligaments and a bone bruise while vaulting in a meet on January 9. But those lingering injuries failed to sideline Zun for the final sectional meet of her prep career, and they forced her to wear the world’s biggest and coldest ankle bracelet—a cumbersome bag of ice—after meets.

Another agonizing issue concerned Zun moments later, this one having to do with the unknown rather than the I Know I Have a Ravaged Left Wheel.

“Are we good? Are we good?” a worried Zun asked NT coach Jen Pistorius, the question referring to NT’s status in the battle to capture the final at-large berth for this weekend’s state meet at Palatine High School.

“Where’s Bill Stone?” the Cornell Universitybound Zun, looking to her right and then to her left, asked somewhat frantically. Stone heads the invaluable website State Gymnastics Stats and is the go-to guy at postseason meets because he usually knows the cutoff-qualifying scores (team, events, all-around) before anybody else does.

Where’s New Trier slated to be this weekend?

At the state meet, as an at-large entrant by a thinner-than-a-sliver margin of 0.175. NT, with a third-place showing of 143.4 points at the Mundelein Sectional, edged reigning state champion and Glenbard South Sectional qualifier Glenbard West by that gap for the final (fourth) at-large ticket to state.

“Not our best meet,” Pistorius admitted nearly a year after her 2018-19 crew finished in a programbest-tying second place at state. “We were hoping for 144 points. There’s more pressure here than there is at the state meet. We’re … in. We made it.

“The girls,” the coach added, “showed a lot of perseverance. They’ve been working hard all season.”

“We made it, barely,” said a relieved Murdock, one of three reliable seniors (with Zun and Avery Faulkner) on the Trevians’ state series team. “I like this team; I like our up-and-coming gymnasts.

“This sport, at times, can be so exhausting, mentally,” she continued. “But you have to zone in for each routine, do your best for the team.”

Zun looks to Murdock when her mind is racing at an Indy 500 level or nearing the speed of a blender churning in smoothie mode.

“She knows what to say to settle me down,” Zun said gratefully. “So supportive, and Maeve helps me focus and stay grounded. It’s her personality, in general, that makes her such a great teammate.” 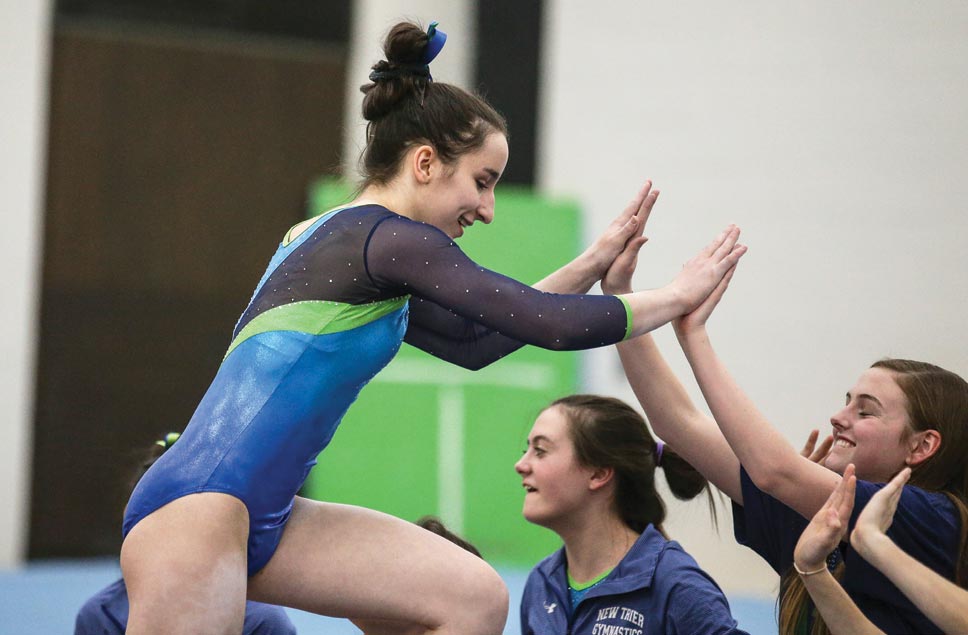 The state meet at Palatine High School starts on February 21 and concludes the next day, with the championship finals session in individual events beginning at 2:15 p.m.

New Trier’s appearance in the state team competition will be its seventh in the last nine seasons under 24th-year head coach Pistorius.

NOTABLE: New Trier graduate Zoey Spangler (Class of 2019), a member of last year’s state runner-up girls gymnastics team, is a freshman cheerleader at the University of Washington in Seattle. The number of years Spangler cheered at New Trier: 0 … Murdock, on Zun securing a spot on the women’s gymnastics team at Cornell University next year: “So happy for her. She deserved it.” … Carmel Catholic (145.975) and Mundelein High School (145.25) finished 1-2 at the Mundelein Sectional on February 13.

“She motivated us before the meet,” Lake Forest High School junior Kristin Fisch said after qualifying automatically for the state meet on vault (9.5, fourth place) and bars (9.275, fifth) and highlighting her squad’s fifth-place showing (140.55 points).

“She reminded us to focus on one event at a time.

“She made sure we were prepared.”

Fisch also advanced with at-large state berths in the all-around (36.55) and on floor exercise (9.15). Sophomore teammates Taylor Cekay and Lindsay Fontana extended their seasons, too; Cekay made it to state as an all-arounder (35.975, at-large) and beam (9.1, at-large) competitor, and Fontana notched her first state berth with an at-large score of 9.325 on vault.

Highland Park High School: Giants junior Becca Gordon topped the vault field at the Mundelein Sectional with a superb 9.65 and also advanced automatically to this weekend’s state meet on floor with a fifth-place 9.275.

Gordon has a good shot to become the first state medalist (top five, in any event) in program history.