“It was kind of scary because it was going so smoothly,” Linton recalls.

But pure joy stomped fear as Linton’s squad of dynamic Scouts—competing in the Medium POM division—held its final pose for four seconds following a highly athletic, super-in-synch routine on February 2.

“That was the pinnacle of our season, and we experienced it on the final day of a national competition,” adds a proud Linton, whose 15-member troupe finished runner-up to a crew from Louisiana and also took ninth in the Medium JAZZ division. “I remember two key moments during the final when I thought, ‘Yes! Yes! That’s it!’

“Special,” adds the team’s third-year coach, who cheered in high school and in college and danced professionally for years. “The whole weekend was special, a culmination of several months devoted to hard work and staying positive.”

The varsity team’s road to claiming national silver on Super Bowl Sunday started last summer, when it automatically qualified to perform in Orlando by capturing top accolades at a summer camp held at Northern Illinois University in DeKalb.

But it didn’t start practicing the choreography it would showcase on the national stage until November. T.J. Maple, of Nacogdoches, Texas, served as pom choreographer. 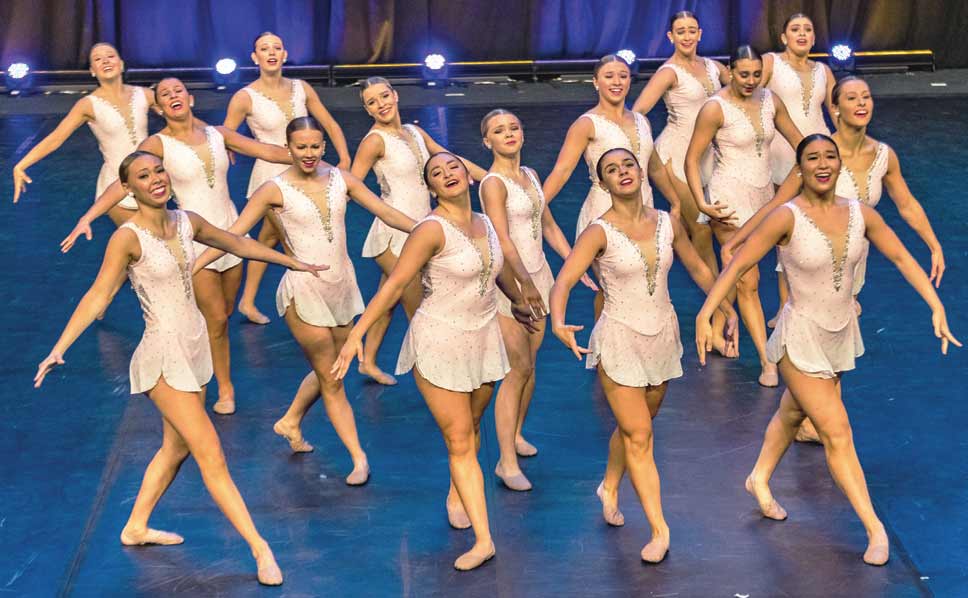 The dancers practiced for three hours after school Monday through Friday and for nine hours every Saturday and Sunday. Some even found the time to hit the fitness studio at The Dailey Method in Lake Forest or complete rigorous CrossFit sessions.

“We consider ourselves extreme athletes,” says senior Lilly Neil, a tri-captain with classmates Marissa Giangiorgi and Ava Manelis. “We gave it our all for three months. The workouts were lengthy and tough. We built our stamina and got in incredible shape. It was worth it. During our final routine, we could feel each other’s energy, and we fed off that. What also helped us was seeing our coaches, who were right in front of us, react positively to our moves; we knew we were doing well.

“As soon as our routine ended, I felt a ton of pride.”

Heard, after one of the Scouts’ performances in The Sunshine State?

“I was told a security guard said, ‘That was a whole lot of sweetness out there,’ ” says a hoarse Audrey Giangiorgi, Marissa’s mother, who lost most of her voice due to her excessive cheering at the Walt Disney World Resort. “Another person said, ‘Wow, do they know pom!’ The girls amazed me, amazed all of us. They didn’t just work hard, physically; they also studied videos of their routines at home, as well as pictures and screenshots.

“The timing they had built and built and built, with the help of their coaches and choreographers, was outstanding,” she adds. “And they peaked, together, at nationals. It was a true team.”

Some of the members have been dancing since age 3. Others play a varsity sport or two and dance on the side. Others are varsity cheerleaders.

Team LFHS—a year after placing fourth nationally in the Large POM and Large JAZZ divisions—nailed its pom performance in the preliminaries on January 31, allowing it to advance directly to the finals segment two days later. In between it placed ninth in a field of 50 national jazz qualifiers with an affecting “Tiny Dancer” presentation, choreographed by Faymie Link, of Phoenix, and Megan O’Malley, of Austin, Texas.

“Our pom routine is hard-hitting, athletic, and packed with fast movements,” says Rice University-bound Marissa Giangiorgi, a fourth-year varsity dancer, like Neil. “It takes a lot of teamwork, along with trust, to make it work and to make it look good for the judges and audience members.So much of it is about making quick, unique visuals with our arms and legs. We also popped some tricks and jumps.”

Giangiorgi and seven of her dance mates will graduate in the spring. Expect them to espouse the program’s motto, “P4L” (“Poms for Life”), and do next winter what so many others did during UDA Nationals this winter.

“Our alumni are the best; they are incredibly supportive,” Neil says. “They called us, texted us, and posted something every day we were in Florida. The number of text messages we got from them, we couldn’t believe it. But we definitely appreciated their enthusiasm and constant interest in how we were doing at nationals.

“It seemed like we received a text message every second.”