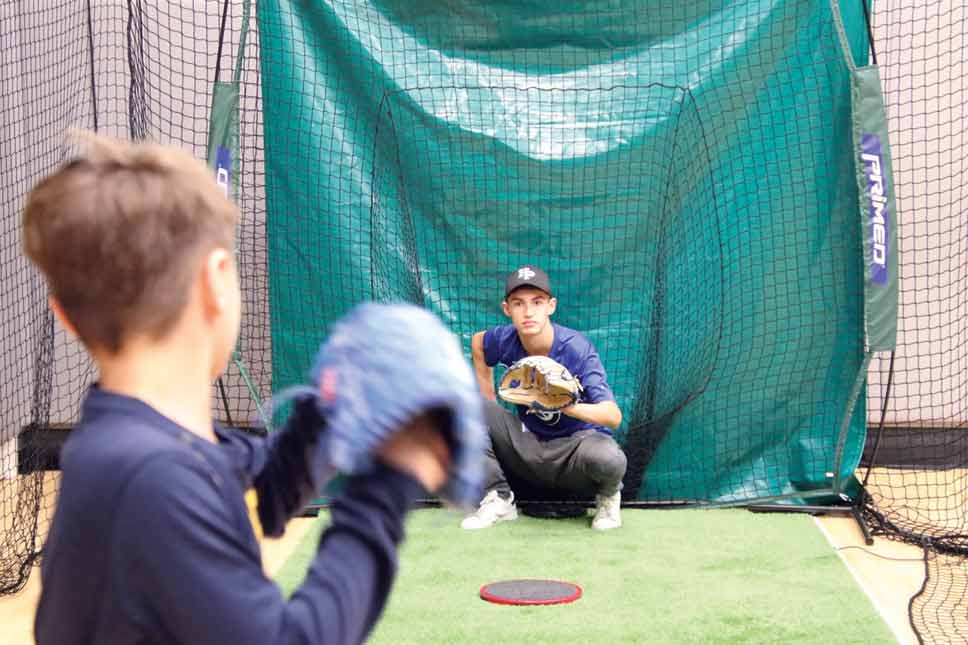 Translation: the sophomore baseball and basketball player likes to go another round after practice, be it gobbling up more ground balls at shortstop in the spring or shooting more jumpers from three-point hardwood in the winter.

“I’m always interested in doing what it takes to get better in my sports,” Bondy says. “If there had been something like Talenthood around when I was younger, I would have thought, ‘Wow, that’s cool. Sign me up.’ ”

Accomplished, responsible teens share their acumen and blueprints to success with youngsters in athletics, academics, technology, music, and creative hobbies. Talenthood’s tag line is, “Big kids teaching little kids.” Say a forward-thinking, seventh-grade hoopster, with designs on playing varsity basketball at HPHS in three years, wants to add post moves and play better defense, as well as learn what HPHS varsity coaches expect from the program’s forwards and centers. Talenthood provides the instructor, a current HPHS varsity basketball player. The family of the budding athlete contacts the established athlete through Talenthood, and then they pick an hour to meet for a session ($40) at, say, the Recreation Center of Highland Park or—weather permitting—on a driveway with a basketball hoop and backboard.

“Amazing bonds are created between high school students and the Talenthood kids they’re coaching or helping,” Bondy says. “The instructors get to showcase their talent; the kids benefit because they’re receiving valuable tips and advice in between the commitments to their teams or classes.”

“Cooper,” Bondy says, “worked with a young soccer player in New York and then, later in the week, went to one of the player’s games to cheer for him. Imagine how thrilled that kid must have been when he saw his new mentor supporting him from a sideline.”

But there’s more to Talenthood than giving local youth the opportunity to become a better athlete, or a finer musician, or an ‘A’ student in math, or a more efficient video editor.

Each student/mentee donates $2 of each $40 session to one of three organizations: the Harold E. Eisenberg Foundation, which is committed to embracing life’s challenges through gastrointestinal cancer research and education; Fenix Family Health Center in Highwood; or Great Lakes-based Kids Rank, which provides military children with a sense of stability through interactive group learning experiences.

Talenthood’s math: add or hone a skill or two in 60 minutes—and add a couple of dollars to an organization’s coffers.

“We are honored and grateful that Parker selected our foundation,” says Harold E. Eisenberg Foundation President and Founding Board Member Peter Eisenberg, whose son Henry is a good friend of Bondy. “It’s not surprising; Parker has been dedicated to giving back through our foundation for years. He’s a natural, doing what he’s doing with Talenthood. He’s genuine. I’ve seen him interact with his young cousins and Henry’s young cousins. Parker always takes time to find out what interests young people.

“His communication skills, along with his maturity, allow him to connect with people … people of all ages,” Eisenberg adds.

Each instructor receives $32 for each $40 session, with $6 earmarked for Talenthood’s marketing efforts and website design. Bondy had a stable of 40-50 instructors through January 31; he makes sure all of his instructors are competent in their respective fields. He has welcomed seasoned soccer, basketball, baseball, lacrosse, tennis, and volleyball players into the Talenthood fold, as well as experienced swimmers, gymnasts, pianists, drummers, guitarists, and singers.

More than 120 local parents had inquired about Talenthood-North Shore Region in its first few weeks of operation.

“I’ve learned a lot since starting this,” says Bondy an A-B student and a shooting guard on the Giants’ sophomore basketball team. “Marketing, more than anything else. I now have a better understanding of how to handle money. And I have been able to establish so many relationships through Talenthood.

The proudest parents in Highland Park might very well be Craig and Elliana Bondy, a pair of HPHS graduates.

“I’ve seen the energy Parker has put behind Talenthood,” Craig Bondy says. “He loves the concept of building a business. But he loves the opportunity to give back more than that. There’s hope that this will spread to other communities. Talenthood can have such a positive impact. Everybody wins— the kids, the kids’ parents, the instructors, the charities, and the community.”