Ask Corey Winchester how he thinks he clinched a spot at Northwestern University and you won’t hear a word about admissions essay tutors, expensive private counselors, or a laundry list of extracurricular activities. Instead, he will tell you about a human journey outside of the classroom—one that involves family dinners, weddings, and funerals.

It was in those settings where he forged a bond with his elementary school teacher Andrea Gray. And it was that meaningful connection between a caring educator and child that laid the foundation for his success as both a student and educator today.

Last March, 31-year-old Winchester, a 2010 Northwestern graduate and now a history and sociology teacher at Evanston Township High School (ETHS), received the Golden Apple Award for Excellence in Teaching. The prestigious honor was bestowed to 10 recipients from a statewide field of 500 nominees.

Winchester, a Philadelphia native, isn’t the maudlin type. Yes, he grew up in an underserved community. He has heart-wrenching stories about his mom taking care of three children while his father, a U.S. Army Reserve member, was called to Iraq. He’s also a first-generation college graduate. But to reduce him to a Horatio Alger-esque figure would be a disservice; his life is so much more than a tidy tale of a boy beating the odds.

The way he sees it, he was actually quite fortunate, and he is keenly aware of the fact that his childhood support system is one that many lack (but desperately need). Now he feels a duty to pay it forward.

“My family let me be me,” says Winchester. “Ever since I was a kid, I was someone who just loved random knowledge, and that’s something they let me explore.”

His mother (“my best friend,” he says) took advantage of a program for discounted access to cultural institutions; along with his grandmother, they would take trips to Philadelphia Zoo and The Franklin Institute. She also armed each of her three children with library cards, encouraging them to be voracious readers (Winchester still keeps a copy of Goosebumps in an old plastic storage container full of childhood treasures).

“Of course there were moments when I didn’t want to do homework,” he says. “But my parents didn’t micromanage, because I micromanaged myself. I liked getting As, and I liked the idea of being great at what I liked doing. Both my parents were more invested in who was teaching me and how those relationships developed.”

Winchester’s relationship with Ms. Gray, his first-grade teacher, was the most pivotal. While it’s an unorthodox procedure in most schools, Gray was permitted to keep her class in tact through the third grade, giving her two extra years to invest in her students and their families. It was an opportunity she relished.

“She found ways to humanize us,” he says. “She wasn’t getting us ready for tests. Education is something that is done in community; it’s intergenerational. It’s not done in metrics.”

Gray would invite the Winchesters to her home  for dinner; Winchester was later an usher in her wedding. In 10th grade, when Winchester’s beloved grandmother p assed away from breast cancer, Gray attended the funeral.

“It was one of those validations that she was more than a job title,” he says. “She saw her relationships as being loving; it’s a similar love that I had with my own parents.”

It should come as no surprise that Gray was also in attendance with Winchester’s family at the Golden Apple Foundation awards ceremony— her influence is obvious in his current teaching philosophy. 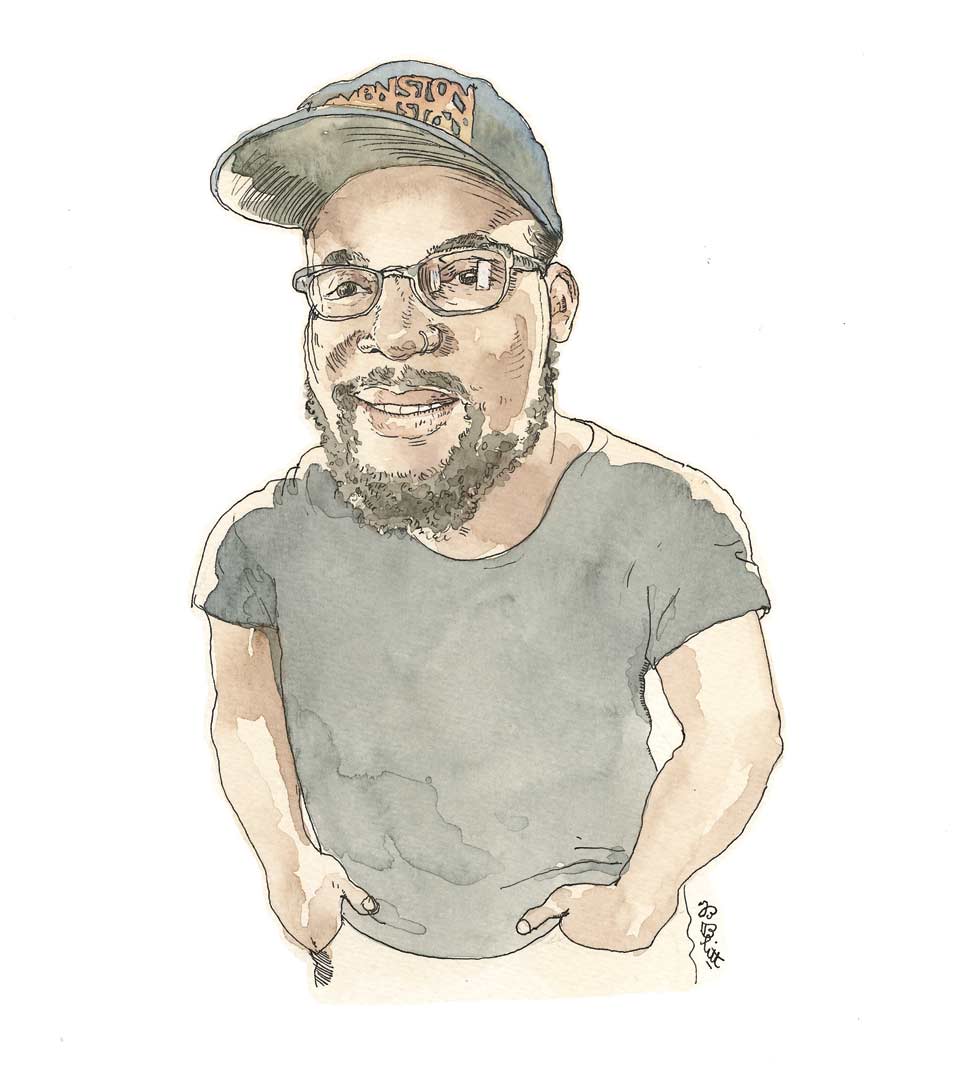 “Traditionally, relationships in education are transactional,” explains Winchester. “The sole purpose is to get a kid where they need to be, and make sure they get an A. But that removes the responsibility of getting them what they need, which is to find out who they are and how to love themselves.”

With classes of up to 30 students, Winchester  knows it’s a challenge to recreate his connection with Gray with every single student. But that doesn’t stop him from trying.

“When you’re standing in front of young folks, 42 minutes is not a lot of time to deliver instruction and also work on building relationships,” he says. “You have to prioritize; you have to find ways to get to know who they are. Students will trust you with information about their lives.”

“You have to be honorable and accessible,” he adds. “Students want to see that you’re a person too. I think I would argue that what some schools are doing is customer service as opposed to relationship building. And in communities of color, we talk about villages raising our children—that’s what really makes a successful space.”

Winchester is currently on sabbatical at ETHS, but true to his nature, he’s not one to rest on his laurels. In addition to possessing a master’s degree in education from Loyola University Chicago in Cultural and Educational Policy Studies, he is currently pursuing a second master’s in learning sciences at Northwestern. He is also policy fellow at Teach Plus, where he works on methods to improve school discipline, teacher preparation, and retain teachers of color. And when he returns to his teaching post, you can find him actively involved in student organizations like SOAR (Students Organized  Against Racism).

“I think the work that I’m interested and passionate about is twofold in an educational setting,” he says. “How do we find disruptive ways to support the humanity of others? We need to love each other in our formal learning settings. How can we be urgent about that work, and responsive to those needs on a global scale? We’re in unchartered times, and I believe there is hope. There are things we can do to make things better, albeit in increments.”