Bob Murphy’s face softens. Cracking a warm smile will do that to a visage.

A co-founder of the Daniel Murphy Scholarship Fund (DMSF) with his brother Jim, Bob Murphy— senior vice president, real estate services, at Wintrust in Northfield—had just recalled a DMSF interview he had conducted with an eighth-grader named Charlie in the early 1990s.

“He had a lot of poise,” Murphy, still smiling, says. “A lot of character. Fire in the belly … he had that, too. Charlie wanted to attend De La Salle Institute [a private school on Chicago’s South Side]. Back then we had 30 kids going for 10 scholarships. His maturity at the age of 13 was amazing. He killed the interview, just killed it.

“He had a brother who was developmentally challenged, and I could tell Charlie served as a father figure to him.”

Murphy went to bat for Charlie after the interview and hit a grand slam for the youngster. (The baseball is still rolling). Charlie then hit the books hard at De La Salle and continued his education at Marquette University, the Murphy brothers’ alma mater.

The enduring spirit of Murphy’s father, Daniel, was the seed of the Daniel Murphy Scholarship Fund (DMSF), established in 1989. After Daniel died in 1988, at the age of 61, Bob and his brother Jim got together with friends and family and decided  to launch an organization that would provide tuition assistance to Chicago students from under-resourced neighborhoods.

D a n i e l Murphy—who served his country in World War II as a 16-year-old, returned home and became an all-state running back at Highland Park High School, and worked tirelessly as a blue-collar employee—sent his sons to Loyola Academy in Wilmette.

Education meant the world to the patriarch.

“Our dad made big sacrifices to allow us to attend Loyola Academy,” says Bob Murphy, a Lake Forest resident. “He was a fiery Irishman, a great storyteller, a great joke teller. He was incredibly engaging around people; he was a people person and a natural public speaker. He served as president of the Rotary Club in town.” 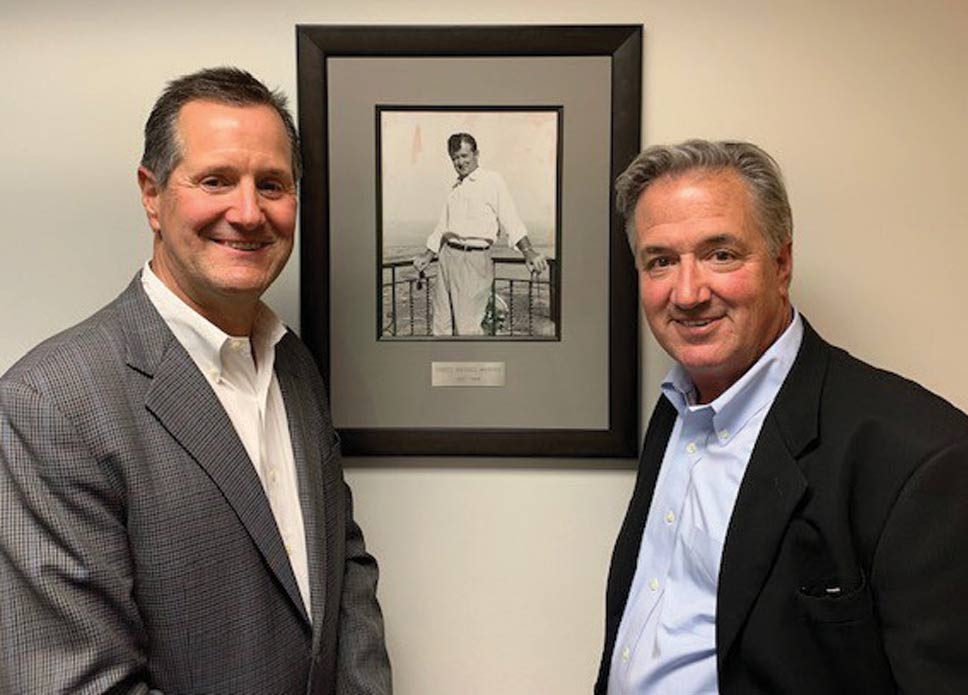 Bob and Jim Murphy with a photo of Daniel Murphy.
PHOTO COURTESY OF DMSF

“We don’t consider the scholarships handouts; they’re helping hands for great kids with promising futures—and there’s never a shortage of kids like that,” says Murphy, whose brother Jim steers Chicago-based Grow Forward and its mission to fund, mentor, and grow sustainable enterprises that are just as good for business as they are for the communities in which they work.

“You should see the faces of these kids when we  present the scholarships to them,” Bob adds. “They look like they had just won the lottery. But all of them deserve the scholarship, deserve the opportunity to become what they’re capable of becoming.”

DMSF raised $1.8 million at its annual golf outing last fall, when it celebrated its 30th year of paving paths to success. Daniel Murphy caddied at Bob O’Link Golf Club in Highland Park at a young age; Bob and Jim Murphy later carried bags for members, too. Given their love of golf, it’s no wonder one of the DMSF Programs that Promote Persistence is the summer Caddie Program. (Other programs include Mentoring and Affinity, Tutoring, and College Counseling.)

DMSF received a Platinum Seal of Transparency from GuideStar and a four-star charity rating from Charity Navigator. A four-star designation means DMFS exceeded industry standards and outperformed most charities in its cause.

“It’s a wonderful mission with wonderful outcomes,” says DMSF Executive Director Jose Rodriguez. The Fund is Chicago’s largest high school organization that provides financial and educational support to city students. “We don’t just look at an applicant’s grades; we also look at character and potential. And we continually ask, ‘How can we make a greater impact?’

“We always credit the students who earn the scholarship, as well as their parents. I love it when alumni return to Chicago after college, join the workforce here, and become leaders. They then become interested in current DMSF candidates

For more information about the Daniel Murphy

Scholarship Fund, or to donate to it, visit dmsf.org.