Not with a teammate, via pass.

Not with a basket, via a shot.

The 6-foot Palmer was ready for the friendly smacks, because he receives them before every tip-off. Happily.

“I’m pumped up for every game,” Palmer would say later on his 18th birthday. “Those slaps? Love them. They help me. They add fuel to my fire.”

Palmer slapped an inanimate object—the basketball— late in the fourth quarter of Loyola Academy’s 41-33 defeat of last season’s Class 4A state runner-up. Palmer’s disruptive move against a driving Wildkit in the lane caused a crucial turnover.

“We’re not a flashy team, except for that dunk [by senior Jordan Kwiecinski, in the fourth quarter],” said Ramblers senior forward Matt Mangan, who came down with a key offensive rebound at the 1:19 mark of the fourth frame, when LA had a 36-31 lead, and blocked a shot with 17 ticks remaining.

“We’re a low-scoring team, and we like to win by making it tough for the other team to score.”

Palmer scored all five of his points in the final eight minutes, including two free throws in the last minute, and grabbed two rebounds in the same time span. But nothing deflated Evanston’s faithful more than Palmer’s cold-blooded three pointer did with 2:03 showing on the clock. 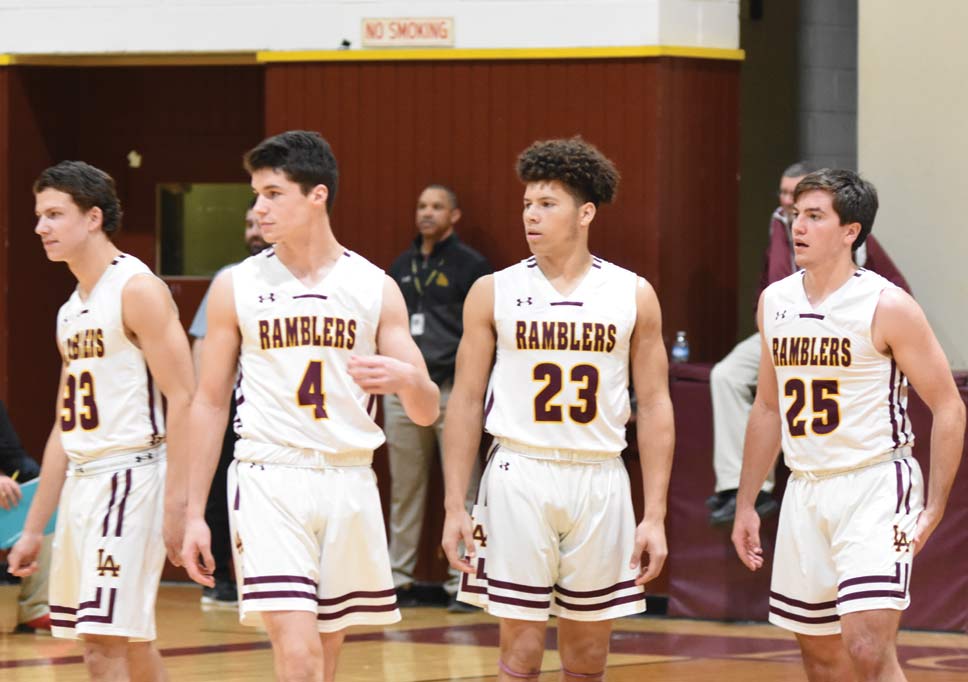 The huge trey expanded the visitors’ lead to 36-28 and gave LA’s sizeable, vocal student section  three reasons to erupt and rattle a rafter or two with its collective roar.

Palmer didn’t come close to getting caught up in the emotion of hitting such a pivotal shot. He and his resolute teammates had more work to do. More suffocating defense to play.

Evanston (20-2) trailed only 36-33 with a little more than a minute remaining. But Wildkits junior sharpshooter Blake Peters, who averages between 15-20 points per game and ranks among the top three-point shooters in the state, fouled out shortly thereafter with only one point.

Peters had netted that in the second quarter.

“Defensively, we’re pretty good, you know?” Livatino said after his club improved to 21-2. “Half-court ‘D’, we’re pretty good at that. Evanston’s players are hard to guard; Evanston is a phenomenal team, a team that’s grinding through a tough stretch in its schedule. Tonight we did some different things—they worked.

Loyola Academy tallied the first five points of the game, led 12-7 after one quarter, and secured a 23-17 advantage at intermission. Senior forward Bennett Kwiecinski, Jordan’s twin, paced all scorers with nine points in the first half and finished with a team-high 11 points to go with his team-high six boards.

The teams combined for only 11 points in the third quarter. Ramblers senior guard Will Pujals (8 points, two 3-pointers) struck for half of LA’s six points in the quarter with a three-pointer at 1:22. Mangan collected a steal in the waning seconds, rushed to the other end of the court, and, after using one leg for his liftoff, nailed a ‘3’ ball that beat the buzzer by two seconds.

“Evanston sent a lot of traps at us,” Mangan said of LA’s turnover fest in its shaky third quarter.

But the hosts managed only five points in the stanza. Junior guard Jaylin Gibson—the Wildkits’ tallest starter, at 6-4—scored all five before finishing with 14 points, with 11 coming after halftime.

“We had to shut guys down,” Mangan said.

They did just that. And then some. Four of  Evanston’s starters combined for only 19 points, and none of the Wildkits’ bench players scored a point.

Loyola Academy’s Jordan Kwiecinski ended up with nine points and five rebounds. The 6-8 guard scored his team’s first four points in the final quarter and capped the night’s scoring with a freebie at 0:12.

NOTABLE: How big was Loyola Academy’s 41-33 defeat of Evanston in a non conference boys basketball game last week? Evanston is a threat, once again, to finish in the top four in the Class 4A state tournament for the third season in a row next month. The Wildkits finish third two years ago and second last March. … Bragging family rights went to LA boys basketball coach Tom Livatino after his crew’s win at Evanston on January 28. Evanston’s athletic director is Chris Livatino, Tom’s brother.