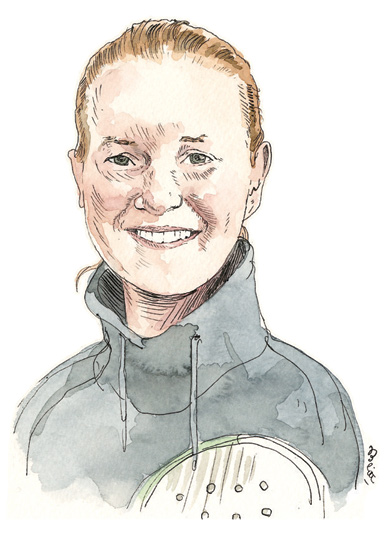 The occasional equivalent of a Sadie Hawkins dance in tennis circles is a mixed doubles tournament.

A young woman named Alison—at the urging of her mother, Christine—called an outstanding tennis player named Adam Morgan years ago to ask him if he’d be interested in playing mixed doubles with her at an Intercollegiate Tennis Association tourney.

“My mother had seen Adam play in a match,” Alison recalls. “Mom was impressed. She wanted me to play mixed with him. We got his phone number; I’m not sure how we did.

Adam Morgan had informed Alison of his commitment to play singles and men’s doubles in the same tournament. Battling in a third draw would have been too heavy of a load.

Years later, circa 2011, their paths crossed again in Illinois. Alison taught tennis at The Racquet Club of Lake Bluff. Adam did the same at The Lake Forest Club.

“Walking a dog together,” Alison says. “I was house-sitting at the time, and he joined me for a walk. Our first meal together was at Panera Bread in Lake Bluff.”

A courtship off the courts followed, until Adam made Alison complete an Easter-esque scavenger hunt indoors one day. Alison found the last plastic egg, opened it, stared inside of it, and discovered … nothing.

“I turned around, and there’s Adam, down on one knee, ready to propose,” Alison says.

About that latter championship effort: It wasn’t exactly a two-ontwo matchup.

“Get out of Adam’s way … that’s what I tried to do during that tournament,” cracks the 35-year-old Alison, who now teaches tennis, paddle, and pickleball at The Birchwood Club in Highland Park, while Adam serves as director of paddle at South Barrington  Club.

The humble Mrs. Morgan did more than scurry to provide space for her husband at the APTA event in New York. Much more. The Grand Valley State (Grand Rapids, Michigan) University Hall of Fame tennis player negotiated her way around the dinky  court quite well and struck countless effective shots.

“I usually play a fast game, always looking to blitz, to be aggressive,” Alison Morgan says. “But I had to change my game when I was pregnant. I played more patiently. I had to play smarter.

“I became more of a well-rounded player.”

Alison Morgan made national news again in early December, this time on ESPN’s SportsCenter. A paddle shot executed by Morgan at the Grand Prix Chicago Charities Tournament in a women’s doubles match was Play No. 10 in SportsCenter’s “Top 10 Plays of the Day” segment on December 4. Playing alongside partner Charlotte Sikora of Philadelphia, Morgan tracked a tricky ball high off a back fence, neared a side fence, spun her frame effortlessly, focused intently on the ball, and then thwacked a clean winner past a pair of stunned foes.

One of SportsCenter’s hosts dubbed it a “snipe shot.”

Morgan—named Female Athlete of the Year in her senior year at Hackett Catholic Central High School in Kalamazoo, Michigan—and Sikora are ranked No. 7 nationally in women’s doubles. Though she doesn’t play singles regularly, Morgan’s individual national ranking among women is No. 14.

Not bad for a high school three-sport athlete (tennis, volleyball, softball) who first hit a paddle shot in 2013.

“I fell in love with the fast pace of the sport right away,” says Morgan, who also plays competitive volleyball once a week and, during the summer, softball in a Highland Park league. “Plus it allowed me to continue to play a racket sport, outdoors, through the winter. I love the outdoors; I love to run outdoors. “I’m an outside person.” But nothing beats being a mother in Morgan’s highly active world. Kaylee, nearly 3, talks in sentences these days. A strong personality continues to e m e r g e . Righty?Le f t y ? Ambid e x -trous, Kaylee’s  mom thinks. Watching Adam interact with Kaylee blows away earning a trophy at a national tournament.

“You’re constantly on the go,” Morgan says of motherhood. “I enjoy every aspect of it. Kaylee … she surprises me, with what she remembers. If I can  think of anything cooler than seeing her with Adam, I’ll let you know. I work from home sometimes; I’m grateful for those days and for my colleagues at Birchwood for allowing me to do that.

“I am so, so fortunate to have family members who help while I work or travel to compete in a paddle tournament in another state. My mom has been great. So have Adam’s parents [Jay and Dena].”

As a paddle instructor at Birchwood, Morgan keeps it simple. She also stresses the importance of communicating during a doubles match, because each side of the court is about a third of the size of a tennis court and silence as the ball ricochets from fence to fence could easily lead to a collision.

“Positioning is a crucial element to success in paddle, right up there with talking with your partner,” says Morgan, who has been in demand to teach paddle camps. “That’s why, in most group lessons, I like to coach and teach after players play competitive points.”

Sophomore year in high school, when she had to earn the volleyball team’s setter job after losing it briefly. Morgan, as a junior, helped Hackett’s Fighting Irish reach a state semifinal match in volleyball.

“My mom,” she recalls, “knew how badly I wanted to be the starting setter. She didn’t go to the coach and fight my battle; she encouraged me to put in the extra time to win that position. I went to the YMCA, before every volleyball practice, and worked out and worked on setting. I’d do hundreds of sets.

“What a great lesson that was for me. I am so glad I went through that, and I’m so glad my mom came up with the best way for me to handle that challenge. The experience taught me discipline. It helped me in college.