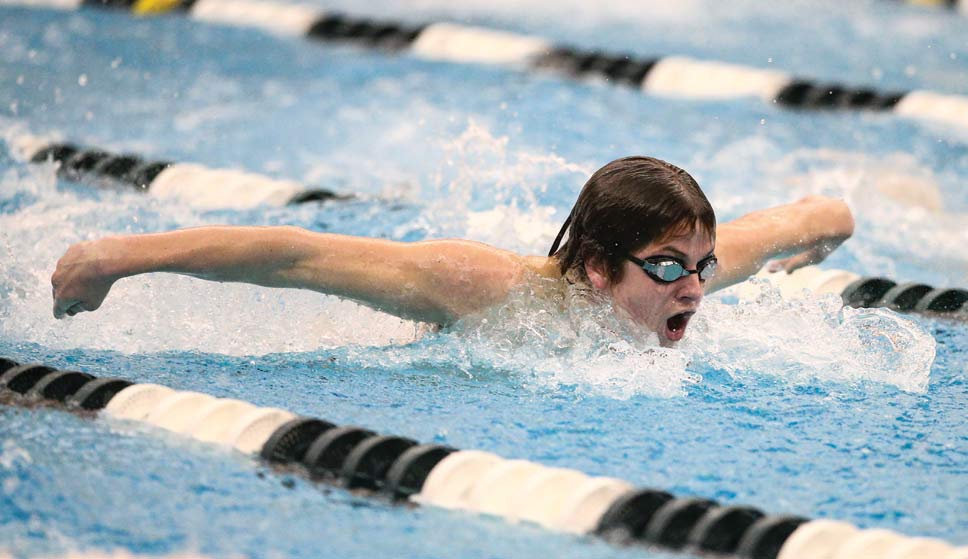 They like to sit together on a couch, sometimes near its edges, and pull hard for the navy blue and burnt orange.

“We put out wings, chips, and all the other essentials for enjoying the game,” says Gibson, in  his second varsity season as a 100-yard butterflyer and 100-yard backstroker. “Football was my dad’s favorite sport growing up. I like to play football pick-up games.

“We both get into Bears games, sometimes too into it.”

The 5-foot-11, 165-pound Gibson tackled another challenge in chlorinated water last weekend, touching first in the 100 backstroke with a season-best time of 54.15 in NT’s 98-88 victory.

It wasn’t winning-touchdown-in-the-last-second sensational, but it was a vital feat—akin to a late first down—in a close dual between schools with huge enrollments: Stevenson houses 4,107 students, NT 3,962.

“I was happy with my time,” Gibson recalls. “Happy because I had worked on my start in warmup, didn’t feel great about the starts, but overcame that and managed to have a strong final 25 yards.  I was pleased with my underwaters, too; those helped.”

So did assistant coach Chris Johnson, a former University of Minnesota sprint backstroker who works closely with NT’s backstrokers.

“Great coach; so is head coach [Josh] Runkle,” says Gibson, a state qualifier in the 100 fly and 100 back and as the flyer in NT’s 200 medley relay last winter. “They’re both good at giving advice, at pointing things out to me that I need to know. I’m an analytical swimmer. I work on, and focus on, details. I like to think through what I’m doing. Sometimes I’m overly critical of myself.

“But if I mess up during a race, I want to make sure that doesn’t happen the next time I race.”

Gibson kicked his swim game up—without the aid of a placekicker’s tee—a notch last summer by qualifying for Junior Nationals in the 18-andunder division in Palo Alto, California. He then hit the water in December at the U.S. Open Swimming Championships in Atlanta, sharing a pool deck with peers, collegiate swimmers, and Olympians. They staged the 1996 Summer Olympics inside that natatorium.

“Nice experiences, as well as valuable ones,” Gibson says. “It never hurts to get cool, big-time experiences like those. Before each trip, Coach Runkle told me to soak it all in, look around, and appreciate being there. Swimming in meets like those boosted my confidence, and I learned a lot,  especially as I watched the top heat in the 200 [meter] fly at the U.S. Open.”

The 200 fly … that event, alas, does not exist in high school swimming. But it’s Gibson’s favorite race because his strength in swimming is his endurance.

“I’m not the biggest guy,” he says. “It probably seems, at times, that I’m racing against grown men in butterfly events.”

Bulky guys grinding away, while executing a taxing stroke like the butterfly, are apt to tire precipitously in the second half of the 200-fly test. But lean guys like Gibson look to pounce late and blast past leaders before striking the final wall.

“If you watch Matt swim in the 200 fly, you’d notice he gets stronger as the race goes,” Runkle says. “He’s developed a lot as a swimmer since last season, and he had a great summer. Smart kid, attention-to-details kid. Matt wants to know information like how his right foot looked or how his left hand looked during a race.”

Gibson followed in the fins of his twin sisters, Caroline and Kathryn, now sophomores at Indiana University. He took his first swimming lesson at the age of 3 and later joined the Evanston-based Flying Fish Swimming Club.

“I started early,” Gibson says. “Swimming became my favorite sport. I love racing. I love practices. I enjoy socializing with my teammates.

“We have a good program again this season,” he adds, noting the Trevians finished in 18th place at state a year ago after having captured the state  boys swimming and diving title in 2018. “We’re going to surprise people at state [February 28-29, at Evanston Township High School]. What we did against Stevenson was encouraging and exciting, probably the team highlight of our season so far.”

“Near the end there, it got loud, everybody cheering for team on a side of the pool. Our energy level was outstanding.”

Gibson’s realistic individual goal is to score (achieve a top-12 showing in at least one event) at state. He had shared the aim with Runkle at a meeting early in the season. But first things first: there’s the Central Suburban League South Meet in mid-February, followed by the Niles North Sectional on February 22.

Look for Gibson to swim faster than that 54.15 in 100 backstroke and to supplant his personal-best time of 51.41 in the 100 backstroke at some point in February—the Super Bowl month.

“My mindset, the one I’ve had for years, is to focus on pushing through, on staying positive,” Gibson says. “And not just in swimming. There are always great things in store for you in the future if you believe in them, right?”

NOTABLE: New Trier sophomore and Cornell University-bound Pearce Bailey won a pair of events in the Trevians’ 98-88 defeat of host Stevenson in a swimming and diving dual last weekend in Lincolnshire, clocking a 21.51 in the 50-yard freestyle and a 48.05 in the 100 free.