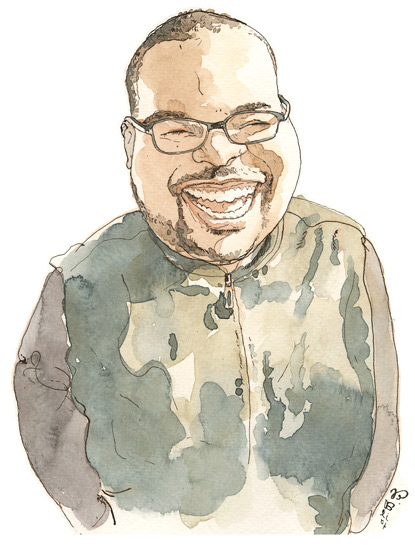 Barnard—an Adidas field agent and the manager of the company’s first Social Purpose Team at the time—had just addressed around a dozen children who survived Hurricane Harvey in 2017.

Some had been displaced.

All did not just listen intently to Barnard’s messages of hope. They. Hung. On. His. Every. Word. The jovial, engaging-since-birth Barnard felt an immediate connection.

“Nadia!” Barnard bellowed at his trembling phone. “This has to be my life! I have to serve as a youth leader. I want to have a positive impact on kids.”

Nadia listened to his declarations and new career aim. She nodded. She knew. Barnard had a gift, a special presence, an ability to embolden youngsters in any setting.

“My wife has been my head coach and my cheerleader for years,” Barnard, more than two years later, says from a seat at a table at Glencoe Youth Services (GYS) in early January.

And Barnard, 30, has been guiding and rooting for North Shore adolescents since being named GYS executive director in August 2019. GYS provides recreational, educational, social service, and leadership opportunities in a safe and supportive environment to high school and middle school age youth living in New Trier Township.

“After I left Adidas [after three and a half years and after receiving the company’s inaugural Social Purpose Award], I was teaching a fashion class,” says

Barnard, who attended Illinois State University for three years, as a secondary education major, before transferring to the Academy of Design in Chicago. “I did not like it at all. I thought about returning to Adidas before I saw the Glencoe Youth Services job posting.”

Barnard grew up on Chicago’s West Side and knew nothing about Glencoe. He researched it. As he drove to the North Shore village for interviews with then-GYS Executive Director Margaret Ann Paauw and current GYS Board President Jennifer Adler, the Curie High School graduate (named “Best Dressed” in his

senior year) thought, “I have no chance at landing the position.”

B u t Paauw  could see Barnard thriving as a leader at the nonprofit, and Adler, impressed after their sit-down, asked Barnard to email her five ideas he’d like to introduce to the agency.

“I could have emailed at least five ideas to Jennifer that day, before I left, because I had thought about them and my visions in general for the organization before my interviews,” Barnard says, adding that one of them—since implemented— was his Mental Health Campaign; GYS partners with K-9 Reading Buddies (therapy dogs) of the North Shore to provide a stress relief clinic for teens on the second Tuesday of each month.

“Jennifer,” he continues, “has been incredibly supportive and hands off since I started here. She basically gave me the keys to Glencoe Youth Services and told me, ‘Drive it.’ ”

Barnard and several of his GYS charges motor to Chicago on the second Saturday of each month to deliver meals to homeless people. Meals they had prepared and packed in the suburbs. B a r n a r d n a m e d the  program “Lunches of Hope.”

Among GYS’s other offerings are a “Know Your Worth” workshop; the monthly Escape Room, a GYS-Glencoe Library collaboration with a problem- solving focus; Social and Emotional Learning Exchange (SELE), a combined GYS-Josselyn Center youth mentoring program; and Cooking Club, which convenes once a month at Central School (grades 5-8), where schoolboys and schoolgirls learn cooking skills and GYS Assistant Director Pamela Tousis serves as Chief Encourager of healthy food choices.

“There’s no one route to reaching a kid,” says Barnard, father of a son, 7-year-old Avrey. “I’m always looking for lanes, for roads, to connect effectively with our youth. I still love fashion; it makes me happy. A couple of grade-school boys with us are working on a GYS project involving [Vons] sneakers. It interested them, and it got them excited. They’re adding style to the shoes, but only after I’d asked them to do so while thinking, ‘What does GYS mean to you?’ ”

The most meaningful influence in Barnard’s childhood was his mother Gwendolyn, a special education teacher at Daniel Webster Elementary School (William Barnard’s alma mater) in Chicago and the wildly popular youth manager at the family’s church. School kids and church kids swarmed Gwendolyn; they sought hugs and an audience from her, and she obliged warmly, every time.

“You should have seen how much time all of my friends and other kids spent with my mom—they hogged my mom,” Barnard says, chuckling.

“My mom was the cool mom. She was great to everybody; she had a genuine relationship with everybody. Mom attracted people to her because she made them feel comfortable around her with her energy and love.

“My mom, I can say without hesitation, is the main reason I found my way to the kind of work I’m doing now.”

William Barnard delivered the commencement speech to Daniel Webster School eighth-graders last spring. The title of his talk was “Go Get Your

Carrot” (also the working title of a book he hopes to publish soon). The lunch lady Barnard remembers from his days as a student at the school was in

attendance. So was a familiar-looking security guard.

The proudest one in the room?

A stutterer for the first nine years of his life, William Barnard stood before another group of impressionable children—1,000-plus miles from Houston—and voiced a series of stammer-free, inspirational thoughts.

“Rabbits want carrots, right?” Barnard says. “I told the kids it’s important to go after what you want in life, to be prepared for some obstacles along the way. Kids face difficult situations everywhere; it doesn’t matter where you live.

“My main point, and I hope they’ll never forget it, was, ‘Don’t let adversity in your life be an excuse for not succeeding.’”

at 680 Greenwood Avenue in Glencoe. For more information,

or to make a donation, visit glencoeyouthservices