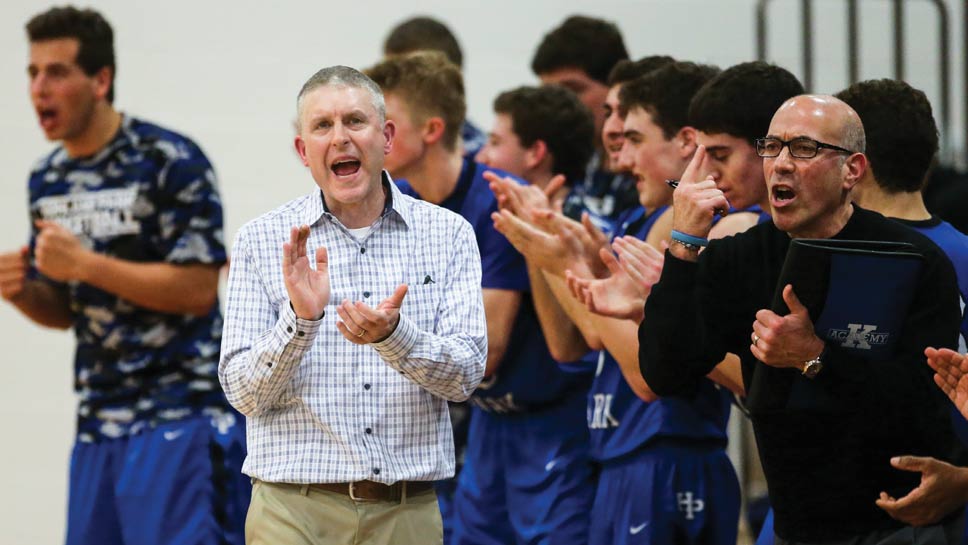 BANKING ON HARRIS: Paul Harris (center), seen here applauding an effort during a game a couple of seasons ago, has been Highland Park High School’s
boys basketball coach since 1999. His Giants improved their record to 10-6 with their win at the Lakes High School MLK Tournament on January 20.
PHOTOGRAPHY BY JOEL LERNER

The Giants amassed a whopping 32 deflections— a season-high total—in their 47-40 defeat of Waukegan High School in the third-place game at the Lakes High School Martin Luther King Tournament in Lake Villa on January 20.

A deflection often leads to a steal, followed by points on the other end of the floor.

Thirty-two deflections, in one game. Need some perspective? There are 32 minutes in a game.

HP’s 1-2-2 zone defense, more than any other scheme, puts Harris’s hoopsters in position to change the course of passes.

“The key to the 1-2-2,” Giants senior guard Ari Cooper explains, “is sprinting when the ball is in the air. You can’t jog to the area you’re responsible for covering. If you do that, you’re going to give the shooter an open shot.

Cooper, like classmate Joey Goshen, comes off the bench to provide a spark, particularly on  defense. Cooper is 6-foot-1, 160 pounds; Goshen stands 6-1 and weighs 150. You could argue, easily, that they’re as vital as Harris’ starters are.

“Whatever the team needs me to do,” says the selfless Goshen, who plans to study business at the University of Missouri. “We’re all big on communicating in games; you need that in order for the 1-2-2 to succeed. It’s all about talking on the court, as well as forcing the ball to the middle, where other guys slide over to help and make scoring even more difficult.”

“Sometimes, in our 1-2-2,” adds Cooper, “you can get caught staring at the ball as its moving; you don’t want that to happen. That’s when communication,

from teammates playing defense behind me, helps.”

HP limited host Vernon Hills High School to five first-quarter points and five fourth-quarter points in its 38-35 victory on a snowy January 17. The win improved the Giants’ record to 4-1 in the Central Suburban League North division.

The visitors survived the Cougars’ 15-point third quarter. HP netted only four points in the  frame and trailed 30-29 heading into the final eight minutes.

“Not a lot of possessions in that game for us, so each was valuable,” Goshen says. “Good win; it’s hard to win a road game in our conference.”

Starting senior guard Zach Fagenholz came up big for HPHS twice in the fourth quarter, nailing a three-pointer—from four feet, at least, beyond the arc—and coming down with a rebound with only 1.9 seconds remaining. His trey gave the Giants a 36-35 lead at the 3:59 mark.

It didn’t allow a point in the final 5:03, after VHHS had secured a 35-31 advantage on an Erik Rimas three-pointer.

“Games are won with good

NOTABLE: Oplchenski, a 6-5, 215-pounder, poured in a team-high 19 points in the Giants’ 47-40 defeat of Waukegan HS at the Lakes MLK Tourney on January 20, and was named to the all-tournament team…HPHS junior guard Nate Fleisher needed only 1 minute, 12 seconds to tally six straight points in the second quarter of his team’s victory at Vernon Hills High School on January 17…Paul Harris also coaches boys golf at HPHS. Junior guard Ben Shamberg drains putts in the fall season before aiming basketballs at nets in the winter… Cooper, on Harris: “He has our back, and we have his. He’s not just interested in helping us become the best basketball players we can be; he’s also interested in shaping us into good, productive people. He’s thinking about our lives after high school.” Cooper is looking to study business at either Ohio State University or the University of Illinois. Future CEO? “Maybe,” he says. “I’m not looking that far ahead. You have to take it one step at a time.”