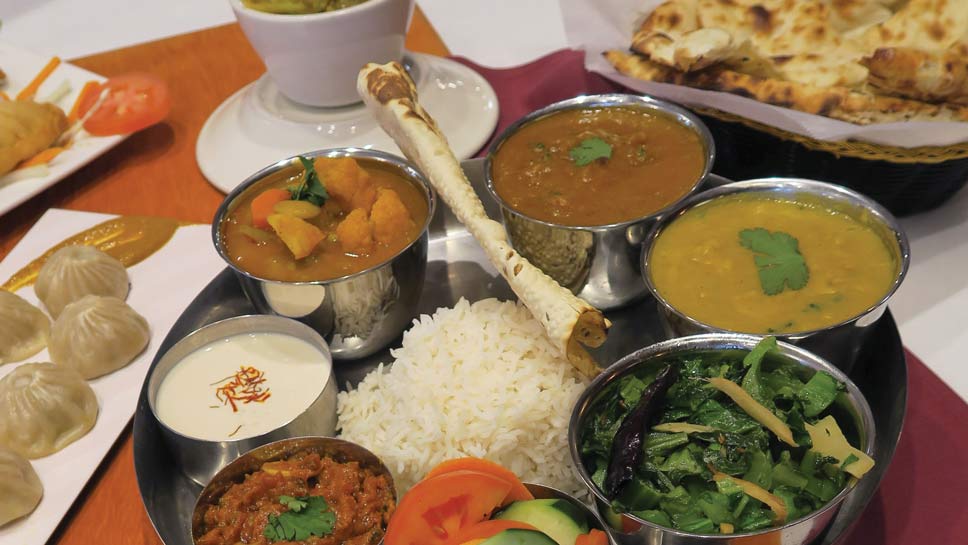 ABOVE: Special dishes from Nepal are the draw at Himalayan Sherpa Kitchen, which took over the former Curry Hut in November. LEFT: Punya Subedi, co-owners Raj Thapa and Gopal GC, and Bir Khadka PHOTOGRAPHY BY DEBBIE LEE

Walk into Himalayan Sherpa Kitchen in Highwood on a weekday afternoon and you will not be hard pressed to find traces of its former incarnation as Curry Hut. There’s the same bargain lunch buffet, dining room furniture, and warm staff. The usual suspects—korma, vindaloo, and chicken tikka masala—are still on the menu. In fact, except for a single colorful garland of Tibetan prayer flags that hang over the booths, you might never know that the restaurant recently changed hands.

But you’ll taste the difference; you just need to know where to look. Co-owner Raj Thapa has been mindful of Curry Hut’s loyal clientele, keeping much of the former restaurant intact (and even retaining its chef ). But he’s also made some tweaks, like adding rotating specials to the buffet, and hiring a consulting chef from Nepal to recreate the food of his native country.

“We definitely see regulars,” says Thapa. “The previous restaurant was here for 16 years, and I understand that there are people who come in for lunch and want to see the things they are used to. But I also believe it’s always good to change.”

One of the most popular new dishes is momo. It’s a perfect marriage between China and India, where Nepal is literally situated. The steamed dumplings look like they belong on a dim sum trolley in a Chinatown banquet hall, but beneath their translucent skins are a chicken filling redolent with Indian spices. (Nepalese cuisine novices be warned: a vegetarian option with fiery cabbage might make you break a sweat.) In place of soy sauce you’ll find a condiment made with roasted pureed tomatoes, cumin, and chile peppers.

Conversely, there’s the Thakali thali set—a regal-looking platter packed with an assortment of stews, grains, pickles, chutneys, and sauces in individual metal bowls. It appears to be a traditional Indian feast-for-one, but is actually unique to Thakali people—an ethnic group whose cuisine Thapa deems the most popular in Nepal. 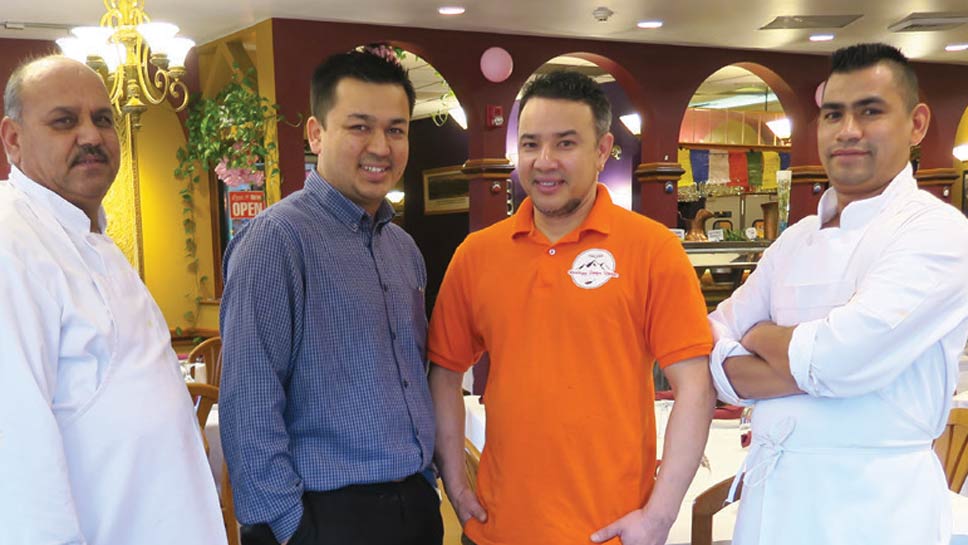 A close look occasionally reveals East Asian influences. For instance, Indian saag is often made with spinach that’s either canned or cooked to the consistency of pudding; Thapa sources mustard greens from Chinese markets for a fresh, verdant side stirfry that’s pleasantly bitter and retains a little crunch. Other dishes get a tingly heat from the surprising use of Sichuan peppercorns.

On one visit, I sampled a set served with bone-in chunks of tender braised goat; it was a decent (but definitely gamey) alternative to the traditional Sherpa protein, yak. On another, I noshed on a vegetarian version that included crispy papadum, a mixed vegetable curry and a simple, satisfying lentil soup.

Nepalese fare should look to a section of the menu labeled “thrill seekers.” Many of the items have a Western counterpart, which might put trepidatious palates at ease. There’s Tibetan sephaley, glazed with ghee and filled with minced chicken and peas—they’re often compared to empanadas or hand pies, but flavored with Himalayan spices. Enjoy Chinese food? Then try the chow mein. A staple in every Nepalese home and restaurant, it’s similar to the kind you’d find at your favorite takeout joint. The only difference is the addition of a mild curry flavor. For the Buffalo Wild Wings fan, there’s the buffalo special wings, braised and stir-fried with freshly ground spices. Substitute raita, a cucumber yogurt dip, for blue cheese sauce.

Thapa, 28, is a native of Pokhara, a popular tourist destination in Nepal that serves as a base for Himalayan trekkers. At 16 he left for London, where he eventually earned a degree in travel, tourism, and hospitality. He landed in Chicago three years ago, where he briefly worked in the hotel industry before teaming up with three fellow Nepalese immigrants to open the first Himalayan Sherpa Kitchen in Lincoln Park.

His professional experience and pride in his homeland are evident; Thapa is a gracious host who is happy to provide a crash course on the nuances of Nepalese cuisine. He explains that variations in flavor and ingredients are the result of the country’s diverse terrain and religious beliefs, as well as its proximity to neighboring countries. Thapa says many of the dishes can accommodate vegetarians, vegans, and gluten-free eaters; he also encourages guests to be transparent about their tolerance to heat and spice. He will often personally make adjustments according to each diner’s needs.

“These are dishes I grew up with,” he says. “So when I am not managing the restaurant, you can find me in the kitchen slicing and chopping. I’ve been working in hospitality since I was 13; I even do most of the cooking at home. Sometimes I think that if I wasn’t