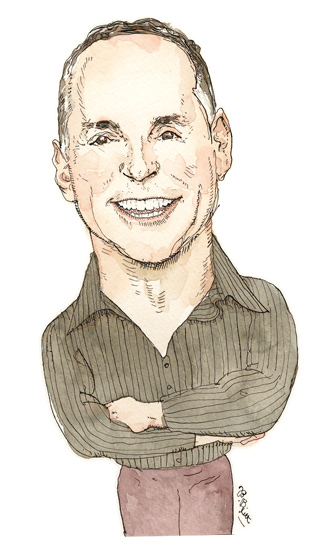 It was March of 2018 and Paul Sweetow, having just finished a session at the gym, was stuck in traffic in Highland Park. This wasn’t a case of rubbernecking caused by the ordinary fender bender. More than 1,600 students from Highland Park and Deerfield High Schools were participating in a national walkout to honor those killed at Marjory Stoneman Douglas High School in Parkland, Florida. The crowds peacefully made their way to Port Clinton Square, demanding action to prevent violence and promote school safety.

Witnessing the event, Sweetow—a licensed clinical social worker (LCSW) who specializes in counseling young children and teens—felt compelled to do his part.

“These kids were literally crying out for help,” he says. “There’s a Japanese concept, giri: a duty or obligation. I’m not equipped to handle certain issues [e.g., gun control], but in terms of mental health services. I had ideas that I wanted to get out to help and I knew they could make a difference in kids’ lives.”

Those ideas took shape in the form of multiple child development books. His first release, Student Life Skills, provides two-minute lessons on social skills, emotional regulation, and increased happiness for children in grades K-6. A companion book, The Socratic Parent (published January 10), teaches caregivers how to use a question format to guide children of any age. It’s a concise, actionable read that provides readers with an alternative to the binary system of being either authoritarian or overly permissive parent.

Sweetow, born and raised in Skokie, holds a bachelor’s degree in psychology from University of Illinois Urbana-Champaign, as well as a master’s degree in social work from The University of Chicago. But what makes his perspective and approach unique is his background as a karate champion and instructor. In addition to his private counseling practice, he offers lessons in martial arts and sports psychology.

At the time of our chat, he was en route to Santiago, Chile to compete in an Olympic qualification tournament (karate will debut as a sport in the 2020 summer games). “I’ll be 56 in March and I’m one of the oldest athletes competing,” says Sweetow. “It’s something I embrace. It’s good for my students to witness my personal motivation, and to see me set goals that are lofty and difficult— but not impossible—to reach. I talk a lot about this with my athletes—don’t always play it safe.

“Plus it’s just fun. Regardless of the results of the competition, which is only one day, the process of training really hard is emotionally rewarding.”

Sweetow began his foray into martial arts 40 years ago, when a friend convinced him to take a tae kwon do class through the local park district. He switched to karate shortly after, eventually taking a part-time job in high school as a private instructor for children. When he asked parents for feedback, they would often report that their kids were happier, more confident, and more social.

“They would respond about ways in which the kids’ mindsets, rather than techniques, improved,” says Sweetow. “I saw a connection between the practice and enhancing one’s life.” He opened his first school in 1993 in Arlington Heights before relocating to Winnetka in 1999, where he still works today.

The Socratic Parent is designed to help caregivers of all socioeconomic backgrounds, but I ask Sweetow if, based on his decades of practice, children of the North Shore face any unique challenges. “In any affluent community, what happens is that children have access to a lot of things,” he says. “And many of them are positive. There are tutors, organizations, clubs … but there’s a downside, too. Some kids have part-time jobs, but many don’t need one. The challenge is that there’s a lot of free time that’s devoted to video games, mobile phones, and technology.” An entire chapter of the book is dedicated to reducing screen time, which he considers a root cause of decreased social skills and increased social anxiety.

But in an age where parents themselves are guilty of taking selfies and scrolling through newsfeeds, how can they expect their children to behave differently? Sweetow says it starts by doing away with the old adage, “Do as I say, not as I do.” “I don’t want to put parents in a place where they think they need to be perfect,” he says. “If we’re asking our kids to work hard, eat healthy, exercise, and control their tempers… those are not easy to do, because even most adults don’t do it. It’s about being on the path of making improvements, and having an inner dialogue. Use the Socratic parenting method on yourself and ask what kind of person you want to be. Try to take a step forward each day and have what I called “plus one” moments. Ask yourself if the thing you’re about to do it a plus or minus in your life.”

He shares a personal example to illustrate the value of taking small steps: when his son Jacob (now 22) was 5-years-old, Sweetow designed an Excel spreadsheet. The goal was to do five pushups a day and tick off a box every time the task was completed. They made it through an entire year, eventually adding to the reps until he was doing 25 per day—or 9,125 a year—by 8th grade.

“You can do something that takes ten seconds or less each day,” he says. “What ends up happening is that the longer they commit, children will build a sense of resilience, grit, and accomplishment.” These are the qualities that will set them up for happiness and success long after they leave the nest.

When it comes to effective parenting, Sweetow references another Japanese concept—bushido, or a warrior mindset. “It’s about finding that balance where you’re really working toward being a good, virtuous, and compassionate person who is also powerful and able to defend yourself when necessary,” he explains.

“Embrace vulnerability, set goals, and try to help others. Those are the most important lessons for children. But for it to work, you have to walk the talk.”

Paul Sweetow will host a talk, The Socratic Parent: How to Navigate Raising Your Child by Asking the Right Questions, on Sunday, January 19 at Winnetka Community House. For information on the event, visit lakeshoreunitarian.org. The Socratic Parent is available on amazon.com. For more information, visit paulsweetow.com.