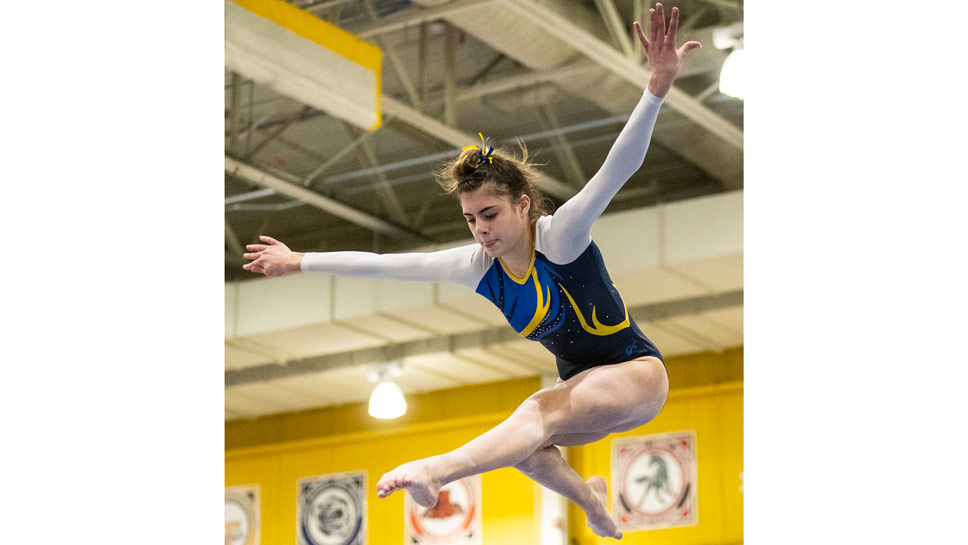 Her Scouts had hit the mats hard—and worked harder than ever—on January 8. They deserved a respite with about 10 minutes remaining in the session, Moccia thought.

“They looked exhausted,” Moccia, a former LFHS gymnast, recalls. “Most were ready to go home.”

The coach announced to her team that she would dismiss them early, but only when Scouts sophomore Taylor Cekay nailed her new uber-difficult flight series on the balance beam. The series: back handspring to back layout.

Don’t try this at home.

Or at any venue, even ones with scores of sturdy spotters.

“Taylor,” Scouts senior co-captain Sophie Prozument says, “had a sweatshirt on when we heard our coach’s challenge to her. She whipped it off and got on that beam, right away.”

With all tired eyes on her a few days before the Straus Invitational on the home equipment, a fearless, unwavering Cekay collected herself and focused on executing the tricky tricks for her teammates.

A fall, or a glaring wobble along the slat, would force Cekay to attempt the series again.

Cheers followed. So did hugs.

Cekay then reunited with her sweatshirt.

“Not surprising,” Prozument says of Cekay, on a clear path to surpass the season-high 9.5 she notched on the log in her freshman season. “She’s the hardest-working person I know, as well as an amazing teammate. When she puts her mind to something, look out. She’ll do it. She’ll impress you.”

The 5-foot-8 three-sport athlete (also a diver and soccer player) and 10-year club gymnast sticks beam moves in meets, too. Cekay performed a first-place 9.4 on beam at the home Holiday Quad on December 19 and finished runner-up (9.2) to junior teammate Kristin Fisch—the Scouts’ top all-arounder—at the Straus Invite on January 11. Fisch scored a 9.3.

“I wanted it to be different,” Cekay says of her decision to spice up her beam show with the eyecatching flight series. “It takes sort of a mind game to do it. You have to know you’re going to stay straight while doing it. You also have to see your feet [as they touch down].”

A state qualifier on beam a year ago, Cekay appeared to have collected a state berth in diving last fall at the Highland Park swimming and diving sectional meet with a personal-best and sixth-place score of 400.15 points. Most seasons, that high of a score reaches at-large status.

“I watched our swimmers compete later that day, and the Vernon Hills diving coach [Nathan Lightman] was keeping track of the diving scores at the other sectionals,” Cekay recalls. “I looked over at him at one point, and a look he gave me indicated I had not qualified for the state meet. Crazy. Next year, right? Sure, it would have been nice to dive at state, but I wasn’t devastated.

Attitudes don’t get much healthier than that. What also lifted her spirits at meets: Club diving coaches liked Cekay’s blatant talent and consistency and encouraged her to up her game off the boards at a club in the offseason. She’s considering doing just that. College diving?

“Maybe,” says Cekay, who was born in Miami and hinted she would apply for admission to the University of Florida in Gainesville.

But landing on mats instead of in water consumes her now, much to the delight of Moccia and Cekay’s gym mates.

“Taylor is more confident as an athlete and as a person,” Moccia says, adding Cekay’s fresh flight series has something to do with Taylor Cekay 2.0. “I’ve also noticed more consistency. She’s more comfortable at meets this season. She’s having fun; we all see that. And she’s having fun while trying new tricks.”

Bad routine? Bad meet? All gymnasts deal with both. Annually. Cekay responds to both with a shrug and gobs of determination. Cekay developed her competitiveness while growing up with brother Ryan, a former crack wide receiver at LFHS (Class of 2019) and current gridder at Colgate University.

“Here’s what’s great about Taylor—she never gets down, never gives up, fights through the tough times, and always looks forward to the next opportunity to show what she’s capable of doing,” Moccia says.

Cekay is like a “little sister” to Prozument, the varsity’s lone senior. They first met years ago at the club Flips Gymnastics North Shore in Lake Forest.

“Taylor intimidated me at first because I watched her and thought, ‘She’s so good at gymnastics,’ ” Prozument admits. “But we started talking, and my fear went away as I got to know her. She brings a tremendous dynamic to a team; she’ll be such a great leader next season and the season after that. She’s a leader now, as a sophomore.

“Just watch her at a meet,” the co-captain continues. “If she’s having a tough day, that won’t stop her from cheering for her teammates and being excited to be around her teammates for the rest of the meet. You can learn a lot from watching Taylor when she’s not competing.”