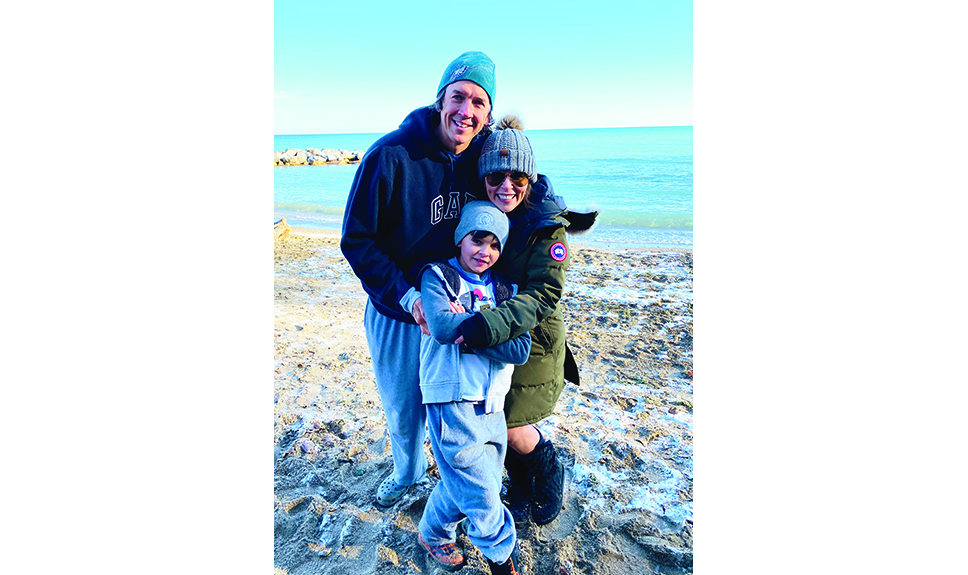 It’s Sunday morning at Sunrise Beach in Lake Bluff. Although this particular December day is an unseasonably warm 45 degrees, there are plenty of clues that we are nowhere close to beach season. Dead oak leaves rustle in the sand, outcroppings of boulders are shellacked in ice, and dogs are bundled up in sweaters to match their walkers.

But by noon, a small crowd has convened by the shore. Ten men and women, stripped down to their bathing suits, begin a series of breathing exercises led by a calm (but authoritative) male voice on a portable speaker. Their faces are a mix of tentative, excited, and determined. Next, they collectively march into the frigid waters of Lake Michigan for the ultimate test of their mental, physical, and spiritual endurance.

This diverse group of North Shore residents are disciples of the Wim Hof Method (WHM). Hof—a Dutch athlete for which the method is named—is known for physical achievements that defy comprehension, including running the fastest half-marathon barefoot on ice and snow. Proponents believe that through his specific regimen of cold therapy, controlled breathing, and meditation, the human body can overcome inflammation, boost immunity, and modify brain activity.

Hosted by Lake Bluff husband and wife team James Stewart (a certified Wim Hof instructor) and Maya Comerota Stewart, this informal gathering has rapidly grown by word-of-mouth over the last year. A New Year’s Day event, called Ignite 2020, attracted more than 40 people— some traveling from as far as Iowa—to the snow-covered sands of Sunrise Beach.

Stewart, 44, was introduced to WHM three years ago by Maya, a former executive at a fortune 100 biotech company and now Chief Innovation Officer of an online health company.

“I’m not skeptical by nature, but the proof is in the pudding,” says Stewart. “I already had a daily routine of practicing mindfulness and meditation. But when Maya saw me get serious about [WHM], she bought me a ticket to Poland to train with Hof.”

He returned from his trip and organized an accountability group with four fellow students. They agreed to take ice baths for 30 consecutive days; Stewart was so committed that he even recalls raiding a hotel ice machine for four days while on a trip to Mississippi. Stewart swears by the results, citing growing scientific evidence that the method can relieve autoimmune diseases, depression, and other ailments.

It didn’t take long for the couple’s newfound knowledge to influence their peers. 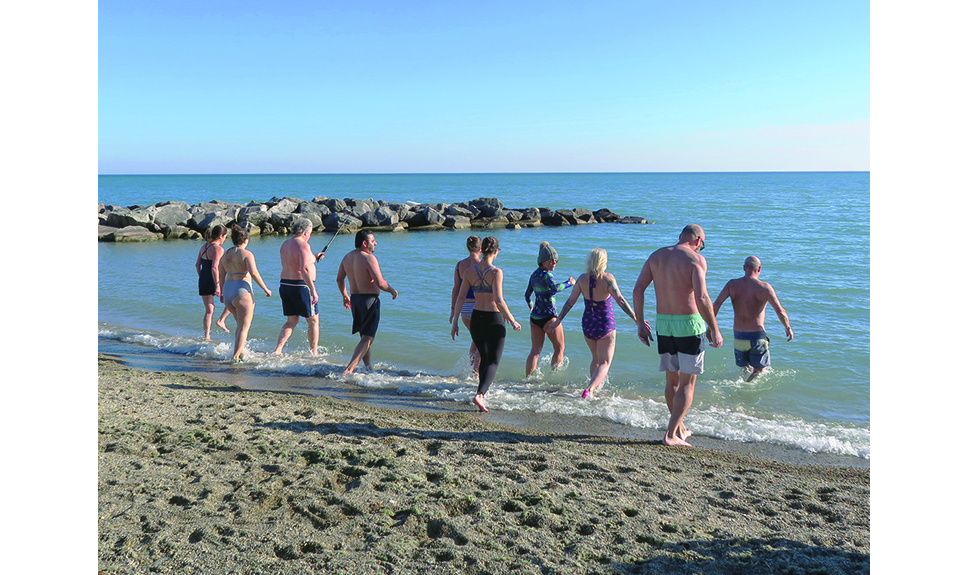 “We’d go in the water the last couple of winters and get some crazy looks from people,” says Stewart. “Then we’d talk to some people at a party and they would show interest in participating. Our intention wasn’t to make it a thing, but people wanted to come along and now we have this little Sunday crew.”

For Stewart, what makes WHM special is its mainstream appeal to men; he says it has an in- tensity not commonly found in other meditative and esoteric disciplines. “I resonate with Wim, as he is a man’s man with a strong connection to his spirituality,” says Stewart. “I learned quickly that when I submerge myself in the ice, there is nowhere else to go but within.”

Thierry Lefeuvre, 67, was invited to join the group over Thanksgiving. The Lake Bluff resident wasn’t necessarily seeking a personal transformation, but the thrill keeps him coming back every week.

“I just wanted to jump in the lake,” says Lefeuvre. “It’s refreshing and rejuvenating.”

A typical meet-up begins with guided breathing and meditation, followed by an exhilarating—or terrifying, depending on who you ask—plunge into the water. The goal is to withstand the conditions for anywhere between 2 to 5 minutes.Today, some participants make a beeline for their towels and coats; Comerota and a handful of other women manage to stay submerged and engage in a series of meditative poses.

The entire ritual ends with something that is not prescribed by Hof, but welcome nonetheless: a spirited dance party with fireside cider and s’mores.

Kati Murphy, a self-described thrill-seeker, was immediately drawn to WHM. The 43-year-old Lake Bluff resident was introduced to it by Stewart, and ever since her first swim last March, she’s been a regular fixture on Sundays. She’s since piqued others’ curiosity via social media, and has even convinced her husband to join the group. (However, her children, who have literally dipped their toes into these waters, prefer the s’mores.) 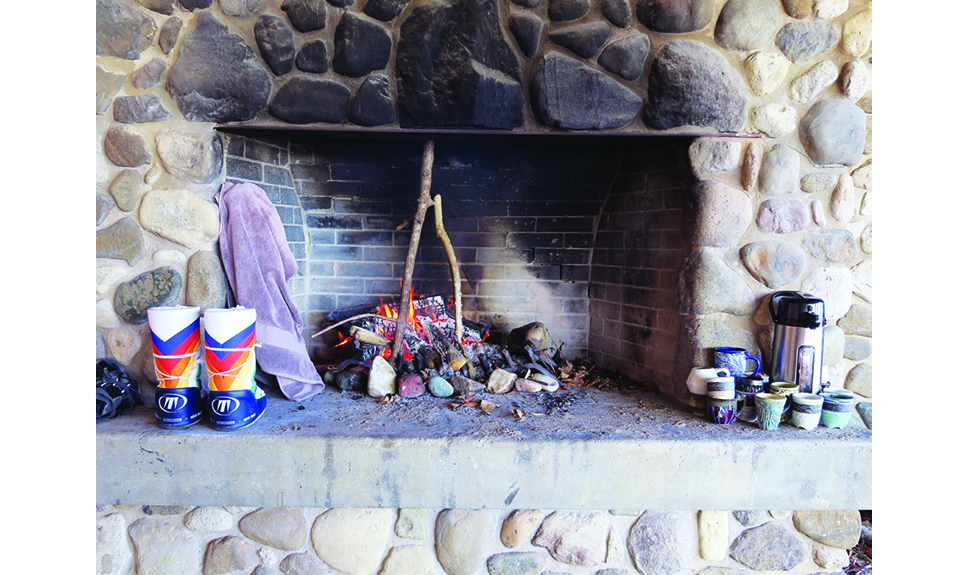 After a cold water dip, a crackling fire awaits. PHOTOGRAPHY BY DEBBIE LEE

“It sounded like it was right up my alley,” says Murphy.“I thought I was going to last ten to thirty seconds, but I ended up staying the whole two minutes. Once I got in [the lake] it made me profoundly conscious of my body; I could feel every follicle of hair underwater.

WHM is not for everyone. Stewart warns that people who are pregnant, epileptic, or suffer
from heart conditions should steer clear of the regimen. Otherwise, he encourages anyone in reasonably good health to experiment with it and reap the potential benefits.

“One of Wim’s famous lines is, ‘You’re getting high on your own supply,’” says Stewart.” There are days I have some trepidation, but when I get out of the water and I think, ‘I don’t know what I was worried about—that was amazing.’”

“It’s a metaphor for your life,” adds Comerota Stewart. “You’ll be in uncomfortable situations, and being able to navigate that transition by utiliz- ing your breath and controlling your physical responses—shifting from discomfort to comfort—is a critical skill and life lesson.”

For this couple, the Wim Hoff experience is about more than metamorphosis. Although Stewart hosts in-depth, one-day WHM workshops in the Chicago suburbs, the free Sunday meet-ups are all about human connections.

“I think a big thing is the community aspect,” says Comerota Stewart. “It’s something everyone yearns for. This group of people support each other and challenge themselves. It’s powerful to see some women in tears of joy, and others overwhelmed with what their body can accomplish. There’s something super powerful about cultivating community and allowing people to come together in a way that builds bonds.”

For more information on WHM and Stewart’s workshops, visit wimhofmethod.com.