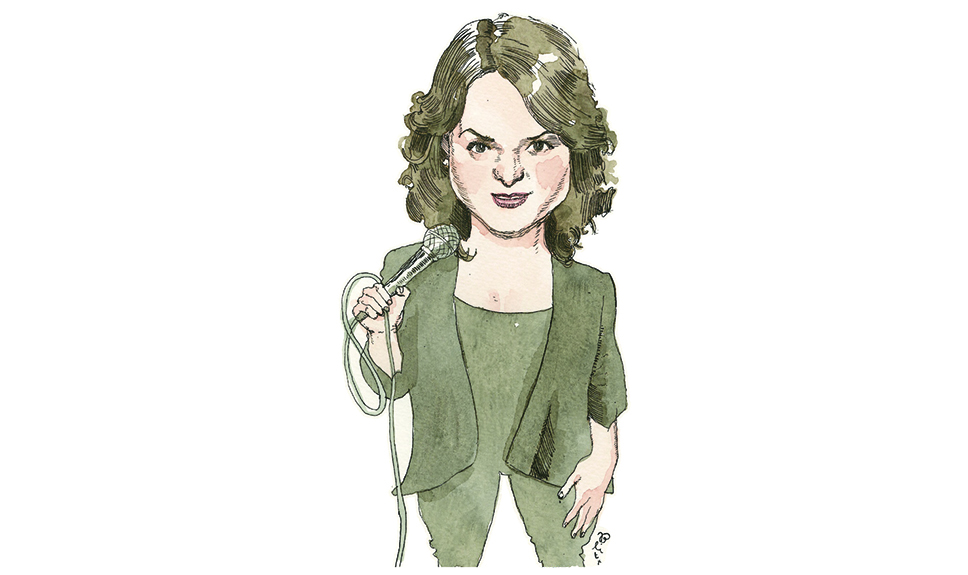 Emilia Barrosse wasn’t meant to follow in her parents’ footsteps. Born in Chicago and raised in Woodland Hills, California by stage performers and television producers, she always had a greater affinity for politics than show business. And after spending a summer studying in a pre-college program at Northwestern University, she made the decision to enroll at Medill and pursue a career in journalism—a decision that brought her family a great sense of relief.

“I think they tried to not have me go into entertainment because they’ve done it for so long,” says Barrosse. “So when I showed an interest in journalism the immediate response was, ‘Yes—perfect! Do that!’”

But the apple doesn’t fall far from the tree, and by sophomore year, she reconsidered her decision.

“In college, no one ever sugar coated what the media world is like right now,” she says. “They were preparing us for a future where a publication could go under at a moment’s notice. I was feeling disheartened about it and wondered if this was how I should be feeling about something I planned to do for the rest of my life.”

Barrosse began to explore her talent in comedy. She joined a local improv group, then wrote and produced sketch comedy videos—one of which was screened at the Chicago Comedy Film Festival. It’s hard to deny her family’s influence: her father, Paul Barrosse, and mother, Victoria Zielinski, began their own successful troupe while they too were students at Northwestern. The Practical Theatre Company (PTC), which performed in Evanston in the 1970’s and 80’s, was a breeding ground for talent (four cast members, including Barrosse’s father and Julia Louis-Dreyfus, were scouted here to join the cast and crew of Saturday Night Live.)

However, it’s important to Barrosse that she establish her own identity in the field. “I don’t see myself as following them,” she says. “Every PTC sketch has been so uniquely brilliant without ascribing to any tropes of any time, and they were always how funny I wanted to be. But I never really hit my stride with improv, and it wasn’t until I discovered stand-up that I thought, ‘Oh, oh, oh, now this is what I love.’ I have such a clear idea of what I want to say and do, and with stand-up I get to do that, and the audience is the most honest judge of it.”

Barosse’s stand-up sets are playful observations on everything from the rise of Bitcoin to the demise of baseball—all with a decidedly millennial point of view. And while some older audiences might pine for the days of politically incorrect humor, and others wonder if our current political climate leaves any room for laughs, it would be a mistake to assume that this 28-year-old is here to judge them for it.

“I think one of the things that informs my comedy that people find refreshing is that I have a really optimistic, positive perspective,” she says. “It’s just a different type of voice. Some stand-up is about insulting everyone and everything around you, but I have people who will say they feel good after my set.”

“Comedy is changing and I’m excited for it. But I still have reservations about cancel culture. When someone makes a mistake and we cancel them and everything they’ve ever done, that’s not a safe, compassionate environment to learn and teach someone how to be better. Everything has so much nuance and gray area, and we’re all living in it, so let’s start acting like it.”

When asked how someone her age appears so self-actualized, Barrosse laughs. “I’ve been in therapy since I was 14,” she says. “It’s the best thing anyone can do for themselves. One of the things I try to do is remove the stigma; it’s an act of self-love.”

It’s hard to imagine that her adventures in therapy didn’t help when she was offered a writing job on the HBO series “VEEP.” Barrosse, who worked her way from production assistant to the youngest member of the writers’ room, initially questioned whether or not she deserved the position. (Spoiler alert: she did, earning a 2020 Writers Guild Award nomination for her work on the show. Winners will be announced on February 1.)

“There was major impostor syndrome,” says Barrosse. “It was really important that I get over that. It was really hard because comedy is such a part of who I am, and it’s hard to make jokes when I feel like I can’t be myself. In the beginning, I felt like I wanted to be the writers I idolized. I needed to realize that I wasn’t them—I needed to embrace the differences rather than try to fit in. And the moment I felt that freedom is when I came into my own.”

These days, Barrosse continues to her stand-up gigs and writes for “Tacoma FD”, a TruTV comedy series from the creators of “Super Troopers.” She also co-hosts Just Tryna Make Friends, a comedy show in Los Angeles and San Diego, with her best friend Julie Roland.

But right now, her priority is gearing up for Big Holiday Bag O’ Fun, a four-night run of performances leading up to a New Year’s Eve celebration at Studio5 in Evanston. The show, hosted by members of PTC (including her parents), will feature a mix of live music and sketch comedy. “There’s so much in store that guests shouldn’t have any expectations except for hilarity and having a fun time,” says Barrosse.

“Evanston is like my second home,” she adds. “My parents’ best friends still live there, and even though my partner is from Chicago, the first time we came back together I was adamant about taking him there and seeing the old stomping grounds. It’s a place with a lot of sentimental value.”