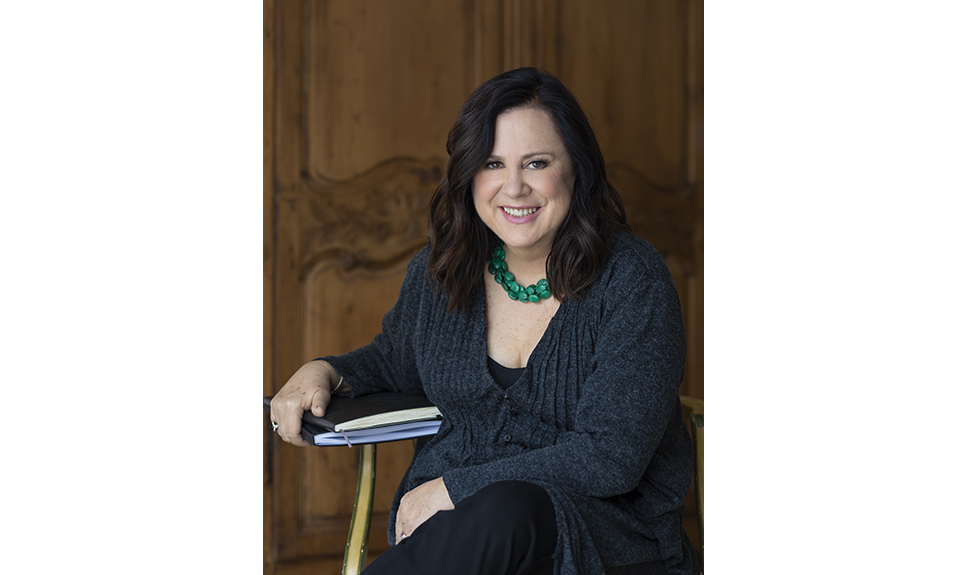 There is the story, and there is the telling. The jumble of wordplay, timing, whimsy, and daring that comes together to make a great story always transcends, leaving the listener wanting more. Anne Purky knows this from doing it. And she wants the rest of Lake Forest to know and do it, too.

“Lake Forest has stories—great stories— to tell. And I’m here to help that happen,” says an impishly smiling Purky.

For three years now, Purky has co-produced the highly successful “Truth be Told” storytelling series at Gorton Community Center, bringing top tellers in front of ca- pacity audiences two to three times a year. This spring, she and her co-producers Amy Wagliardo and Ann Wildman are expand- ing on that with the debut of a new show in Gorton’s intimate Stuart Room. Launching February 28, the first show, “Stand and Deliver,” will be an open mic where Lake Forest residents will have the opportunity to tell stories of their own. For those who want a glimpse of what that looks like, Purky will be doing a show on January 12 at the 2020 Fillet of Solo Festival at Lifeline Theatre in Chicago.

A lifelong resident of Lake Forest, Purky’s storytelling includes raucous rants about everything from being a Weight Watchers drop-out to a hamster-laden volunteer rescue gone wrong. These honest, rarely given glimpses from the underbelly of a North Shore mom’s life are irreverently funny. But Purky is not afraid to go deep—and sometimes dark. In fact, the subject matter that first brought her to the storytelling stage centers on 20 years of experience raising a daughter with cerebral palsy.

Lelia, now a straight-A student at John A. Logan College in Carterville, was diagnosed with CP at 18 months old, didn’t talk until she was 3 years old, or walk until she was 4. Desperate to find treatments that would help Lelia develop, Purky says she tried every treatment, from conventional to obscure.

“One doctor’s method was to wave an old shoe over Lelia to find problem areas,” says Purky. “And then there were the visits to put Lelia in hyperbaric oxygen pods in Florida. And, oh yeah—the aging ballet person who stretched her arms and legs and would gasp,

Reflecting on these experiences, despite the hardships, the humor in each situation surfaced. “I was fortunate to be surrounded by a group of women I call the Mom Brigade who were also parenting differently abled children,” says Purky. “The best way we had to deal with the pain and difficulty was to find something in the tragic we could laugh through.” 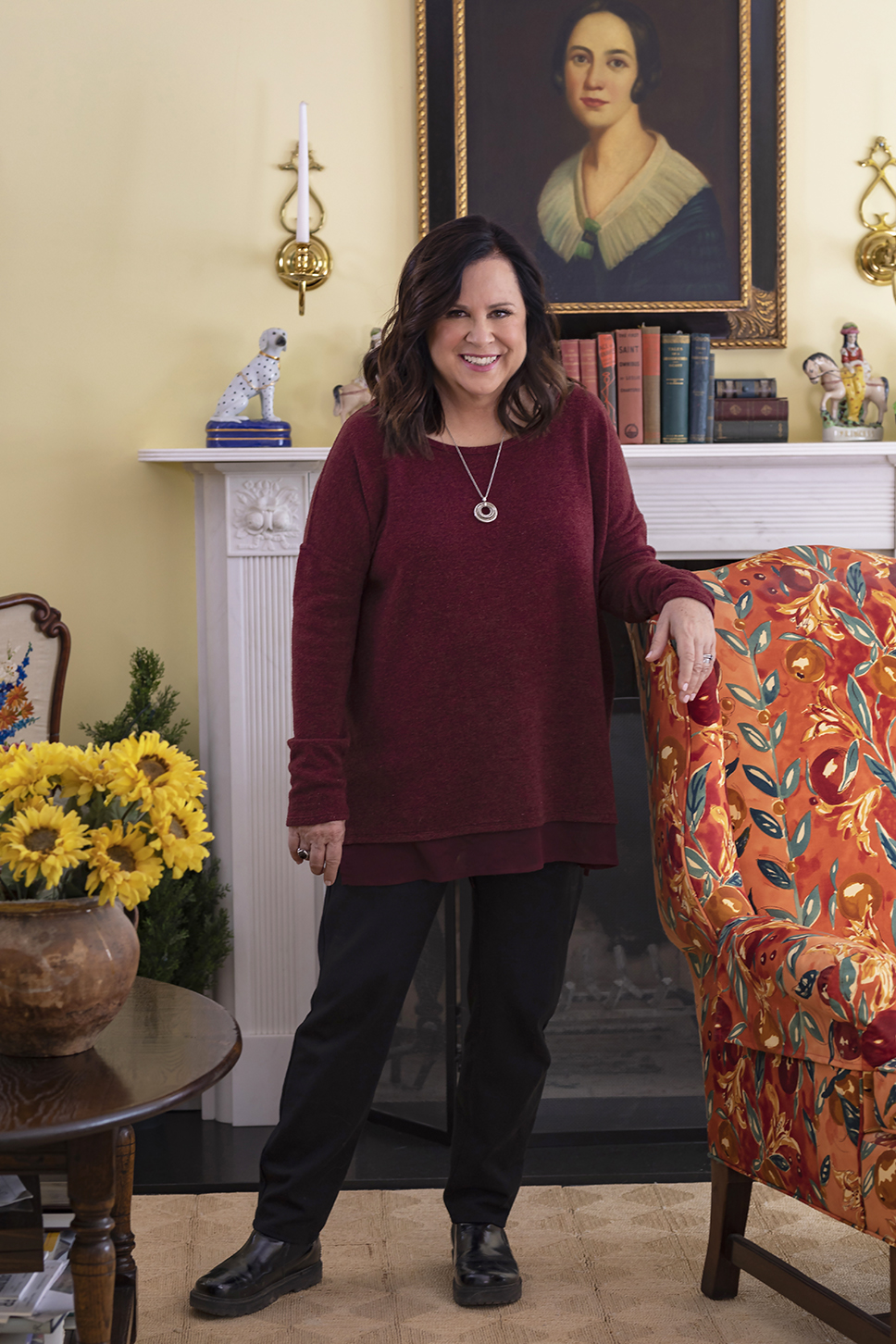 These slices of a difficult time in her life would eventually become stories that Purky told first at “Louder Than a Mom” shows at Martyrs’ in Chicago, and, more recently, at Lifeline Theatre.

But Purky has more material to draw from—a lot of it from the Lake Forest fount. Her parents, for example, loved to entertain, throwing over-the-top cocktail parties in the

’70s that were often elaborately themed. “One time,” says Purky, “They did a party themed after A Midsummer Night’s Dream, with people decked out as fairies, and in period dress, and my mom as Queen Mab. Everybody lavish and laughing, with cocktails in one hand and cigarettes in the other. That scene is a story in itself,” she laughs.

Art and culture were priorities in the Purky household. “My parents brought us to theater, exposed us to art and travel,” says Anne. “They were big into sailboat racing. And my dad loved to read. Hemingway. Kerouac. Ginsberg. Almost every day, we’d sit down at the table

and talk about all kinds of obscure topics. And of course, books. Edgar Allan Poe, Look Homeward, Angel, The Yearling. I remember studying The Yearling with my father when I was very young.”

Despite all of this, Purky says she didn’t really engage with her studies until her junior year at Lake Forest High School. “And that was all because of Alva Lowey, who taught English literature, poetry and creative writing,” says Purky. “She was amazing. My best mentor.”

Under Lowey’s direction, Purky and other students launched Young Idea, a cre- ative writing magazine. The experience earned Purky admission into Skidmore College, where she studied for two years, studying with two Pulitzer Prize winners: poet Galway Kinnell and famed novelist John Cheever. There, she went on to Northwestern’s film school, where she made experimental films and documentaries.

Her first job came in 1980, when Purky, “Cajoled my way into a job as production assistant on The Blues Brothers film.” Hearing from the crew that if she wanted to do more film work, she needed to go Los Angeles, she “piled everything I owned in a blue VW Bug and drove to La La Land.”

Purky succeeded, working in production for commercials, music videos, and other projects. But after nine years, she was home- sick and returned to Chicago. A blind date with her former high school classmate Jim Purky led to marriage, and four years after that came the birth of Lelia.

Now on the other side of navigating Lelia to a healthy and more independent life, Purky is thrilled to be writing, performing, and producing storytelling events throughout the Chicago area.

This year, she joined musician-storyteller Stephanie Rogers to help expand Story Jam, Rogers’ popular live music and literature performance series, and she is producing new retreats and workshops at Ragdale, shows at City Winery in Chicago, SPACE in Evanston, and more. Story Jam is moving forward with events in larger venues such as Lincoln Hall, with more opportunities taking shape.

But Purky is just as excited to get Lake Forest up on its feet telling tales at Gorton. “Good storytelling is about connecting,” she sums. “Taking risks and being vulnerable

about your life, you connect with your listener’s vulnerability, too. Growing up in Lake Forest, people assume it’s all privilege and sunshine. But each of us has had experiences that go far beyond that. By hearing other’s stories and telling your own, you experience so much compassion. You also find empathy for yourself. It makes it much easier to let go of fears about judgment.”

For information on storytelling at Gorton Community Center’s “Stand and Deliver,” February 28, at 7:30 p.m, visit gortoncenter.org. For tickets to Anne Purky’s show “The Fixer,” at Lifeline Theatre’s Fillet of Solo Festival, visit lifelinetheatre.com.