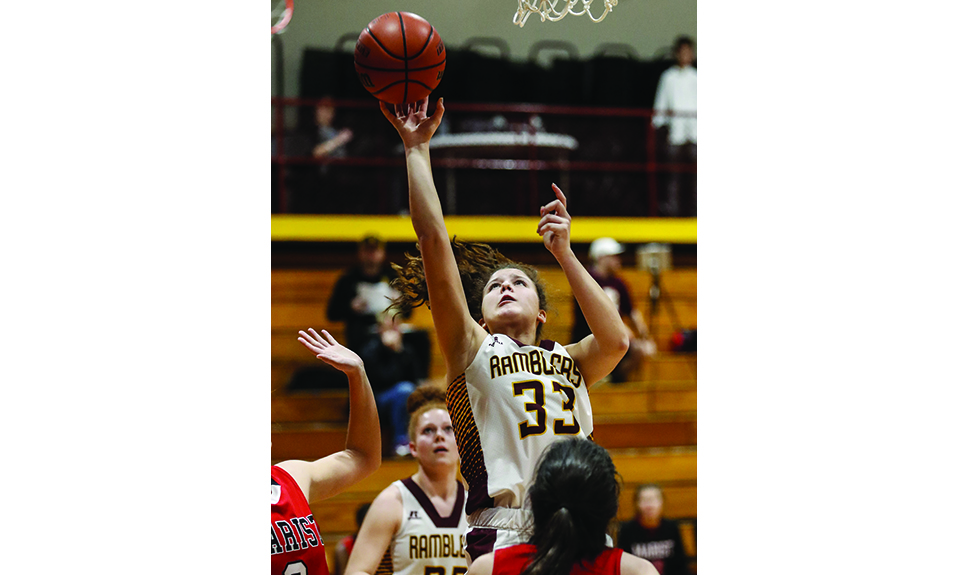 ALL EYES ON I. O.: Loyola Academy junior forward Isabella Ogliore, seen here in action last winter, netted six points and grabbed three rebounds off the bench in her first game of the season last week. She had missed the first 10 games with a broken bone in her right foot. Ogliore helped LA defeat visiting Providence Catholic 51-29 on December 12. PHOTOGRAPHY BY JOEL LERNER

It’s not the sweetest combination of sounds, but it’s the haphazard symphony you hear at hoops games.

Loyola Academy junior forward Isabella Ogliore unintentionally interrupted the “concert” during a preseason Fall League game this year— and likely elicited cringes from those within earshot.

“I heard a crack,” Ogliore said of the bone that snapped in her right foot after the Rambler had collected a rebound in the home gym.

Ogliore missed the first 10 games of the 2019- 2020 winter basketball season and returned to game action on December 12, when LA hosted Providence Catholic High School and routed the one-loss Celtics 51-29.

Ogliore didn’t start in the Girls Catholic Athletic Conference crossover contest in Wil- mette. But she certainly sparked her club off the bench, scoring six points, coming down with three rebounds, and battling relentlessly (she knows no other way) as LA improved its overall record to 7-4.

Ogliore’s effort didn’t surprise Ramblers coach Jeremy Schoenecker in the least. He had plenty of reasons to award a spot to the then-sophomore after varsity tryouts last winter, and he was thrilled about being able to deploy the effective post player again more than two weeks before the New Year.

“We missed her,” Schoenecker said minutes after meeting with his Ramblers in a classroom following the Providence game. “She does a lot of things well for us.”

Scarsella’s three-point shooting ignited LA and seared Providence Catholic in the first half last week. The 5-foot-6 guard—a graduate of Our Lady of Perpetual Help Catholic School in Glenview—hit four three-pointers in the first 16 minutes and finished with a game-high 13 points. Her fourth trey beat the second-quarter buzzer, barely, and upped the host team’s lead to 24-13.

The same Silvana Scarsella (named after her late grandmother) did exactly that to stun Fenwick High School in a tournament game held at New Trier High School on November 29.

LA senior forward Addison Ebeling owned the hot hand in the third quarter against the Celtics (8-2). She nailed the first three treys she launched in the frame, the third stretching LA’s

advantage to a comfortable 34-20 at the two- minute mark. The Evanston resident ended up with nine points and a team-best six rebounds.

Ramblers junior guard Nyah Moore (10 points) capped the quarter with yet another three-ball. Schoenecker’s cagers would finish the game with nine three-pointers to PC’s five.

“Their shooters, No. 10 [Scarsella] and 23 [Ebeling], were good, too good,” said Celtics senior point guard Claire McGrath, who tallied a team-high 11 points and provided a boost, albeit a brief one, with consecutive treys in a 1:06 span in the third quarter.

“We tried to guard them,” McGrath added. “We tried our best.”

Back in the second quarter, LA’s side guarded Celtics magnificently, limiting the visitors to a mere two free throws in eight minutes. PC, which led 12-11 after one quarter, attempted only four shots in the second stanza and trailed 23-14 at the break.

LA didn’t let up at either end of the floor after the 10-minute intermission. Scarsella shoved a perfect inbound pass to Ogliore, who then netted

an easy layup at 3:27. That well-designed play occurred in between Ebeling’s first two triples. Schoenecker’s girls of winter essentially secured the victory when they went up 46-26— their first of two 20-point advantages—on a bucket from reserve junior forward Caroline Naraky with 2:14 remaining.

How happy were Naraky’s teammates for her? The roar of approval for that shot was the loudest of the night.

“Our confidence grew, especially after the first quarter,” said Ogliore, who later praised the Ramblers’ coaches for their sound game plan. “We all believe in each other. Tonight, it showed we can compete with any team.”

NOTABLE: Providence girls basketball coach Eileen Copenhaver, in her 15th season at the school in New Lenox, played basketball at Loyola. Not Loyola Academy; Loyola University, where athletes at the Chicago campus are also called Ramblers. … Loyola Academy’s girls basketball team got off to a 5-0 start this winter, with its fifth win (a 60-53 decision) coming against New Trier in a Thanksgiving Tourna- ment game on November 27. … Providence Catholic entered last week’s game at Loyola Academy four days removed from defeating Carmel Catholic at Nazareth Academy’s gym in a GCAA/East Suburban Catholic Conference Challenge game. It was the Corsairs’ first setback in eight games this season. … LA shot 46 percent (16-of-35) from the field, while PC connected only nine times in 32 tries (28 percent). … LA was 1-0 in the GCAC Red Division through December 13. … Two former LA hoopsters are in the GCAC Hall of Fame: Olga Gvozdenovic and Laura Sobieszczyk. Both were inducted after the 2016-2017 school year. Both played for the Ramblers’ Class AA state championship (and eventual GCAC Hall of Fame) teams in ’97 and ’98.