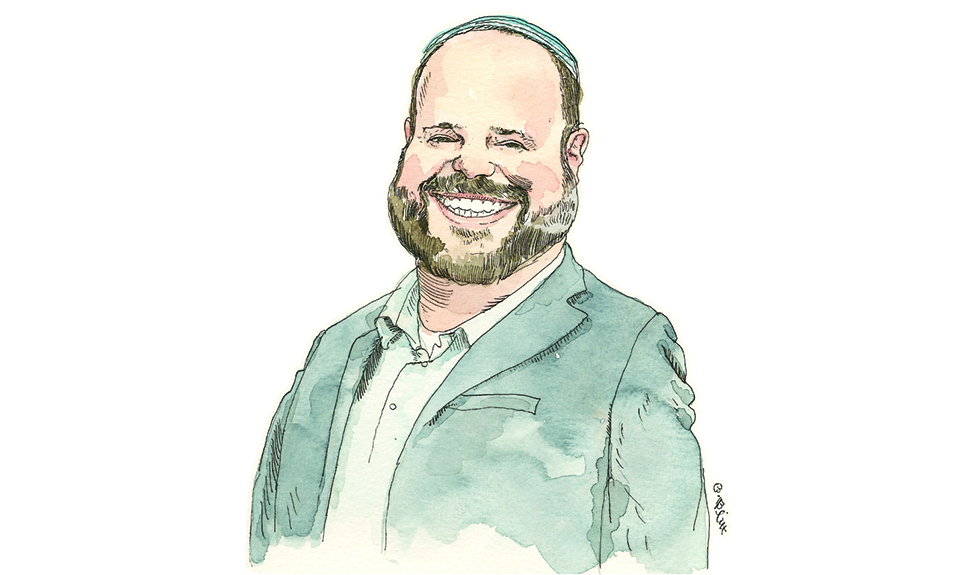 Rabbi Jacob Rosenberg is used to it. Strangers meeting him for the first time hear his title, see his bright, bearded face, and the yarmulke perched on the back of his head, and make assumptions about his beliefs. They are usually wrong. “Most people don’t know what Messianic Judaism actually is—that we believe Jesus is the Messiah,” says Rosenberg, Rabbi at the Adat Hatikvah synagogue in Deerfield. “Some people think Jesus was a prophet. Some think he was crazy. Others, that he was just a nice, Jewish boy. But we believe he was the Messiah that the prophets and Hebrew scriptures foretold.”

So asking Rosenberg, “What does Hanukkah, or Christmas, mean to you?” yields some interesting answers.

Most simply? “Light. Jesus is the light of the world,” says Rosenberg, quoting from the gospels of Matthew and John: “His light is what brings each of us out of darkness, and gives hope to all nations.” Rosenberg’s sermons and family celebrations during the winter holiday season focus on this.

“As Messianic Jews, we celebrate the best of both Hanukkah and Christmas and how they are linked through Yeshua [the Hebrew term for Jesus],” Rosenberg explains. “There is continuity between ancient prophecies written in the Hebrew scriptures and texts, and the Greek scripture (the New Testament). Together, they form a path for the whole world to be unified under one God.”

Even though the original events of Hanukkah in the second century B.C.E. were, in Rosenberg’s words, “a political chaos machine,” he says that lighting candles today, “reminds us that Jesus is a light that never goes out. The events surrounding his birth were the fulfilment of hundreds of prophecies. So, during Hanukkah at Adat Hatikvah, we sing the traditional Jewish blessings and light each of the candles from the center candle representing Yeshua, and finish each blessing in his name.”

At home with his wife Heather, and two children, the menorah Rosenberg lights on each of the eight days of Hanukkah is one he has had his whole life. “It’s not a fancy menorah,” he says,“and it’s covered with the candle wax of 40 years of Hanukkah celebrations. But that menorah, along with a recording of my father singing the blessings, got me through a difficult time in my childhood. It was a spark of light in darkness then, and is a reminder today of
the blessings of my family, our connection to each other and to Jesus as the light.”

Heather grew up in a Christian home, celebrating Christmas as a child with typical American cultural traditions: Christmas trees, gifts and holiday treats. But when Jacob and Heather married and started raising their own family, “We wanted out celebrations to focus more on Jesus and less on the decorations. For us [the season] is about light in the darkness and Yeshua being the light of the world.”

Skipping Santa and yule logs, the Rosenbergs prefer annual outings to holiday light festivals, celebrating at places such as the Cuneo Mansion and Gardens, or the Chicago Botanic Garden.

Rosenberg’s journey to becoming a Messianic Jewish Rabbi had its roots in family history. “My dad ’s parents adhered to traditional Jewish faith and customs,” he says. “But then my dad’s older brother became a believer in Jesus. Because my dad and mom were hippies, they wanted nothing to do with either tradition,so they drove all the way across the country to Oregon to get away from that.”

“They actually lived in a van down by the river,” he says with a laugh.“There was a little church community there that used to do potlucks. So my parents started going to those for the free food.”

Eventually? Rosenberg’s parents accepted more than the food, became believers, and started a Messianic Jewish synagogue in New York.Today, four Rosenberg family members are Messianic Jewish rabbis, and another, Rich Nathan, leads the congregation of one of the Midwest’s largest non-denominational Christian churches.

Despite deep grounding in this, Rosenberg’s earliest aspiration was to be a comic book artist. He studied art at the New York Institute of Technology and took a summer class at the School of Visual Arts; his talent earned him acceptance at the prestigious Pratt Institute. But when his cousin graduated from Pratt and couldn’t find employ- ment, “I decided I had better switch to computers to study 3D animation and other more-lucrative skills,” says Rosenberg. His work as a computer technologist in Manhattan brought him a good salary and the high-flying lifestyle to go with it. “But I reached a point where I really didn’t like who I had become through all that,” he says.

Changing course, Rosenberg went back to school. He got a bachelor’s degree in religion at Nyack College, a Master of Divinity at Alliance Theological Seminary, and a Doctorate of Philosophy in theological studies at Trinity Evangelical Divinity School. He then taught and served as a guest preacher at Adat Hatikvah, which eventually led to his post as rabbi.

“I often tell people, it’s not where you start; it’s where you are headed,”says Rosenberg.“And the holiday season is a very good time to think much more deeply about that. Who are you, really? Who do you want to be? Who do you believe God to be? Andwhat will you do with that?”

“During the holidays, the focus in much of our culture is on ‘pres-ents’ rather than ‘presence’— God’s presence in your life, and your presence in the community and in other’s lives,” Rosenberg concludes. “We are at this place in time where people rush from one thing to the next, or substitute social media for being physically present with others. But one of the best presents you can give is to be present. Look for ways to do that this holiday— with your family, and for others in the community, through service organizations, your church, your synagogue or your own chosen actions. Doing that is a great way to be the lights that we celebrate at Hanukkah and Christmas.”