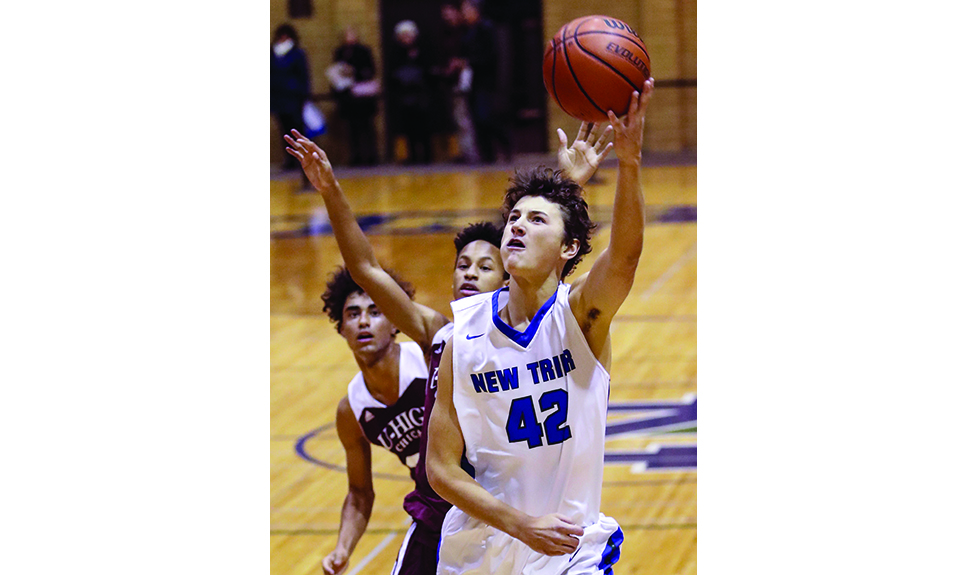 Two were conventional. The 6-foot-7 senior pulled down nine rebounds and blocked three shots in the Trevians’ 63-62 overtime loss to Glenbrook South’s undefeated Titans on December 5.

Random acts of kindness. Burnside led the Trevs with one in that category. Late in the game, right after a referee had indicated he needed to wipe the basketball—maybe it was wet; maybe it was a bit dirty—an alert Burnside marched toward the official. The forward then grabbed the front of his No. 34 jersey with both hands and stretched it toward the ref.

Burnside’s unsaid message: Here, sir, use this to clean the ball.

The act was unusual. It was funny.
And it was kind.
Not so nice was New Trier’s start. Coach Scott Fricke’s club trailed GBS 20-6 after one quarter in the Central Suburban League South opener for both schools. The Titans raced to a 10-0 lead in Winnetka by hitting their first four field-goal attempts, including a pair of three-pointers. Fricke took a timeout, and his boys responded by hitting back-to-back baskets in a 30-second span. Senior guard Will Ryan tallied his team’s first two points at the 4:44 mark, before senior guard Trevor Boehm made it a 10-4 game via his bucket.

But the visitors ended the quarter on a 7-0 run and held a 14-point lead after eight minutes. “One possession at a time,” New Trier senior guard John Carragher said of the team’s collective mindset before the start of the second quarter. “We knew if we stayed focused on every possession in the second quarter, we’d be able to cut that deficit.”

NT (3-2, 0-1) did just that en route to outscoring GBS (6-0, 1-0) 17-6 in the second frame. Carragher (game-high 23 points) scored the first five points of the quarter and added a trey with 2:15 left before intermission. Burnside came through at both ends of the court in an impressive sequence shortly thereafter, blocking a shot and quickly collecting the rebound before nailing a three-pointer to pare the Titans’ advantage to 24-20.

NT found itself behind only 26-23 at the break, thanks to junior guard Jacob Toth’s trey in the final minute of the second quarter.

“Our team is tough, with tons of grit,” Fricke said. “There’s no quit in any of my players; you saw that in the second quarter.”

New Trier kept pecking away at the start of the second half. Six-foot-2 senior guard Jaden Katz—a defensive standout who limited the Titans’ leading scorer, 6-5 senior forward Dom Martinelli (36 points per game), to 17 points— opened the third quarter with a basket off a bounce pass from Burnside. A steal-and-layup from Ryan, 22 seconds later, cut South’s lead to 27-26.

GBS replied with a 9-0 spurt, and neither team would secure a lead larger than three points in regulation until 6-5 junior guard Ian Burns (five points, four rebounds, five steals) connected from three-point real estate to expand NT’s cushion to 52-47.

GBS went up 55-53 with just under a minute to go, and Carragher forced the OT session with a field goal—at 0:11—following a Ryan offensive rebound.

“Crushing. I’m crushed,” said Ryan, who hit three of NT’s nine three-pointers. “Our team, it’s been overlooked, but we have a lot of talent. And we’re tough, scrappy, gritty. We battled tonight, battled hard after that tough first quarter. If we’re down 30 points, or up by five, we’re going to play the same way; we’re going to play with determination and focus.”

NOTABLE: New Trier traveled to Wintrust Arena in Chicago on December 6 for a Chicago Elite Classic game against Lane Tech. NT lost 57-48 on DePaul University’s home court. The Trevians entered their scheduled game December 10 against visiting Maine East with a 3-3 record. … NT boys hoops coach Scott Fricke, on senior guard Jaden Katz, who scored five points and played brilliant defense in the loss to Glenbrook South: “Tough, tough kid. He was sick today; had to miss half of the school day. Jaden works hard on defense, takes ‘D’ personally.” … NT’s boys basketball team got hoops folks’ attention with its Final Four showing at the highly competitive Ridgewood Tournament in the summer. It lost a semifinal to state-ranked Bloom Township High School, a team with four Division-I players. “There’s a lot to be excited about this team,” Fricke said after last week’s loss to GBS. “It’s a fun team to watch. It hates to lose.” … New Trier edged GBS 9-8 in three-point shots made in GBS’s OT victory last week. … NT senior guard John Carragher, on his roles this winter: “Lead us and make sure we keep our composure on the court. I’ll look for my shots, and if one isn’t there, I’ll be sure to get the ball to an open teammate.”