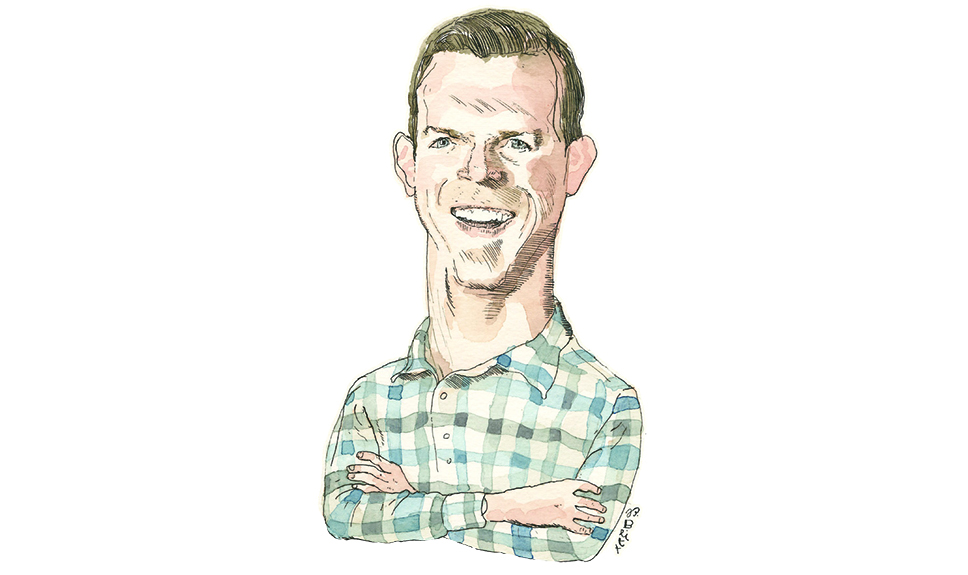 No phone.
No computer.
Oh, and one more thing, young man: You’re not allowed to speak English, at anytime, for seven months.

Matt Ravenscraft faced those daunting challenges in Logrono, a city in northern Spain, as a Lombard native and Wheaton College junior double-majoring in Spanish and secondary education in the 2007-2008 academic year.

“Full immersion,” says the 33-year-old Ravenscraft, now a Spanish teacher and the boys varsity soccer coach at New Trier High School (NTHS). “It was a phenomenal experience, studying abroad that way and for that long. It made me work on my language skills, constantly.

Springtime, 2016. Ravenscraft—a teacher/assistant coach in two sports (soccer and boys track and field) since 2010—is named head boys soccer coach at NTHS. He is excited and anxious, grateful and emboldened, and probably tremulous, bordering on daunted. He had exactly zero days of experience as a varsity helmsman, after all, before receiving the plum job offer from NTHS Athletic Director Augie Fontanetta. Ravenscraft is, in many ways, in Logrono … all over again.

The former Glenbard East High School holding midfielder embraced that opportunity on his home turf this time, swiftly and feet first, eager and poised to execute a clean tackle off the pitch.

“Shortly after finding out the job was mine, I poked my head inside Jim Burnside’s office and sought his advice,” recalls Ravenscraft, referring to New Trier’s longtime girls varsity soccer coach, who has guided teams of Trevians to six state championships since 2003. “I also popped in for visits with [girls basketball coach] Teri Rodgers, [girls lacrosse coach/assistant football coach] Pete Collins, and [baseball coach Mike Napoleon. Coaching legends, all of them. Hall of Fame coaches; I had access to so many of them. How lucky was I?I discussed different aspects of coaching with them, how best to build a team’s culture, all kinds of topics.

“They were helpful and generous with their time—that, right there, is an example of what makes New Trier a special place,” continues the Evanston resident, the husband of Hailey (a two-time national champion Wheaton College soccer player), and the father of Paisley, 4, and Heath, 2. “It’s a privilege to teach and coach at New Trier.” Chris Van Den Berg was Ravenscraft’s social studies teacher in high school. He also served as a Glenbard East varsity boys soccer assistant coach when Raven- scraft was a Ram from 2001-2005. Van Den Berg applied for a teaching position at New Trier at the time Ravenscraft was a candidate for the coaching post he holds today.

“Chris got the teaching job, and I got to welcome him as one of my assistants,” Ravenscraft, still thrilled about the hire, says. “I greatly admired him when I played soccer in high school. He got me focused, pumped me up for games. He continues to be so good in the mental aspects of athletics—at reading a player’s body language, for example, and then coaching him up from there. He’s now a colleague and one of my good friends.”

Ravenscraft considers himself the “cultural architect” of his soccer program, and he takes the title seriously. He makes his boys read inspirational books and oversees whip-around sessions, or engaging discussions of the book’s messages after all had formed a circle. Program history means the world to Ravenscraft; he insists his present players know all about the past. “Occasionally I’ll ask our guys, ‘How many state titles has New Trier won?’ ”

Ravenscraft says. “And I’ll ask them, ‘When did New Trier win them?’” The correct answers: three; and 1974 (a New Trier West squad), 2006, and 2008. “As head coach, it’s important to me to foster a strong sense of program unity and identification,” says Ravenscraft, who guided his disci- plined, possession- based 2019 edition to a 16-2-4 record andaberthina Class 3A sectional semifinal in the fall. “I want my players, every season, to emerge as excellent problem solvers during games. Any coach, in any sport, should want that. I consider coaching an exten- sion of what I do in the classroom; I love that mindset. “It’s not about wins and losses,” adds Ravenscraft, whose other varsity assistant coach is Ryan Loris. “It’s about helping our players become better human beings, through soccer. They’re learning life lessons in games and at practices.”

In his first season as head coach three years ago, Ravenscraft—a former jumps coach under Trevians varsity boys track and field coach Mark Wukas—introduced “Program Training” to every booter on every team in the New Trier Boys Soccer program. Most sports programs’ levels (freshman, sophomore, JV, and varsity units) typically convene once in the preseason and don’t reunite again until the post-season banquet.

“My thinking was,‘All of our teams should come together more often than that,’” Ravenscraft says. “And that’s what we do now … seven, maybe eight, times each season. The captains of all our teams talk. They talk about training, about what they’re focusing on at that point of the season, about upcoming opponents. They’re ideal opportunities for freshmen to interact with varsity players. What does it mean to be a New Trier soccer player? That’s addressed, too, during ‘Program Training’ days.

“I have to admit,” the coach adds, “I stole most of that idea from [Wukas]. I saw how well it benefitted the program when I coached [from 2011- 15] track and field with him.”

Ravenscraft still talks coaching with New Trier coaches, still pokes his curious head inside offices. The best teachers and coaches never tire of continuing education. Plus all those decorated coaches in the building haven’t retired.

Matt Ravenscraft often finds himself at the other end of a pop-in during school hours these days. A coach enters his office. A coach sits down.