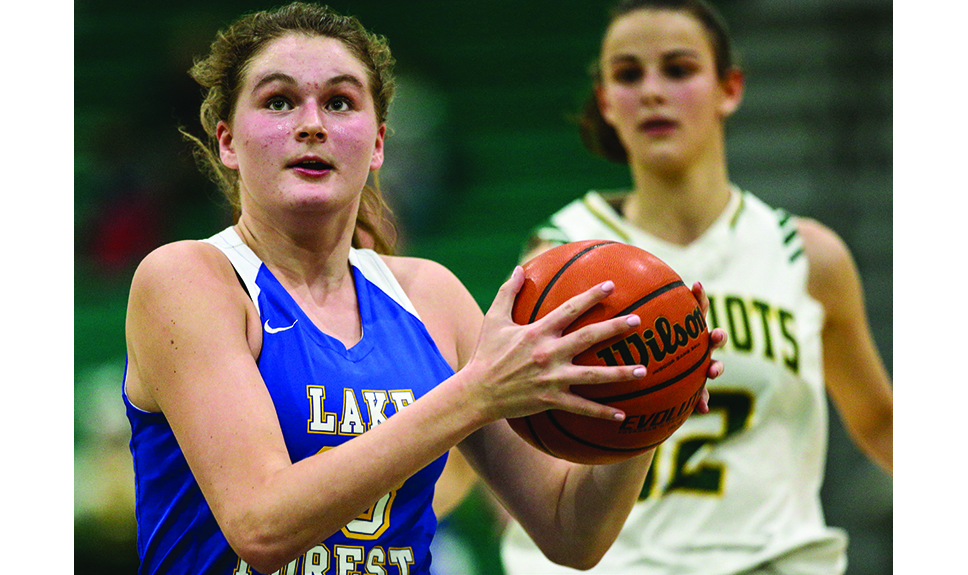 That mad-about-basketball math department at Lake Forest was “sum”thing else last winter.

A good chunk of its faculty members—about half, according to math teacher Kyle Wilhelm — showed up faithfully and enthusiastically during the historic playoff run to the Elite Eight by the school’s girls basketball program in February.

“The math teachers sat together in the stands for our games,”Scouts junior guard Finola Summerville remembers. “It was their section.”

But they weren’t there just to support colleague Wilhelm, who doubles as the school’s head girls hoops coach. They, like the rest of the school and the community, couldn’t get enough of a squad that captured the program’s first sectional championship.

Only eventual Class 4A state champion Maine West High School beat LFHS in the postseason, and that came in a supersectional. All but eight teams in 4A had been eliminated in Illinois at that point in the playoffs.

The Scouts finished with a 27-8 record in Wilhelm’s eighth season.

“Nothing like it, experiencing that, getting as far as we did, and playing for each other in each game,” says 6-foot-2 senior guard and University of Wisconsin recruit Halle Douglass, who owns a slew of LFHS program records.

Look for another fun-and-success-filled February. LFHS math teachers? Don’t be upset that Graduation 2019 subtracted some key contributors from the 2018-19 unit.

Wilhelm had served as Billy Douglass’ assistant coach when both guided the LFHS boys sophomore team for one season together 15 years ago.

“A no-brainer,” Wilhelm says of making room for Douglass on the Scouts’ bench during games after Douglass had inquired about the post last spring. “He’s got great basketball knowledge, and he’s helping out, a lot, during drills at practice. We’ve had a collegial relationship since I’ve known him.

“It’s funny,” he adds. “Who knew, when I was coaching with Billy all those years ago, that I’d be coaching his daughter Halle? Halle was 2 when I coached sophomore boys.”

Halle Douglass was too good at last month’s Vernon Hills Tournament, averaging a team-high 15.4 points per game as LFHS went 5-0 to claim the title for the third year in a row. One of the state’s best guards—an inside force and alert passer on offense and a tenacious defender—finished with 18 points,nine rebounds,six assists, four blocks, and three steals in the Scouts’ 56-32 of Elk Grove High School on November 23.

But individual stats mean little to Douglass. Wins matter to her. So does making sure her teammates get involved—and when they’re active, and engaged, they produce.

The evidence: Summerville, a 6-footer, poured in 17 points, to go with her 11 rebounds, in an impressive 60-30 win over Sycamore High School on Nov. 25; junior guard Molly Fisher netted 17 points in the Elk Grove game; 5-11 forward Lilly Trkla struck for 17 points in the Sycamore team; and freshman guard Bella Ranallo scored 12 points in her varsity debut, helping the Scouts down Vernon Hills’ Cougars 51-36 in the season opener for both schools on November 18.

“This team,” Wilhelm says, “is one of the most selfless groups I’ve ever coached. All of the girls genuinely enjoy being around each other. And so many of my players are athletes—highly competitive, multisport athletes.

“What’s also exciting is the strong core that returned,” adds Wilhelm, who grew up in Mundelein and played basketball for four seasons at Monmouth College.“It’s a core with several players capable of scoring in the post and then dribbling and making a three-pointer in our next possession.”

NOTABLE: How stifling was Lake Forest High School’s defense at the Vernon Hills Tournament last month? It held two teams to 12 points or fewer. The Scouts’ average margin of victory in their five wins was a resounding 55-24…. LFHS was scheduled to open North Suburban Conference action against visiting and reigning conference champion Libertyville HS on December 3…. Halle Douglass participated in the Shoot the Puck contest in between the second and third periods of LF’s annual Pucks and Poms boys hockey game/fundraiser on November 27. One of her shots entered an opening—picture the space of a mouse’s home entrance in a wall—at the bottom of a goal cover- ing. Because of that successful shot, a donation of $250 was made to the Great Lakes Adaptive Sports Association on behalf of the LFHS girls basketball program. “No, not in the least,” a smiling Wilhelm said, referring to being worried about the prospect of Douglass ditching her sneakers and skating for a hockey team from now until March…. Trkla, on first-year volunteer assistant coach BillyDouglass: “He’s a basketball junkie, intense, always helpful with his comments and tips when we practice.”