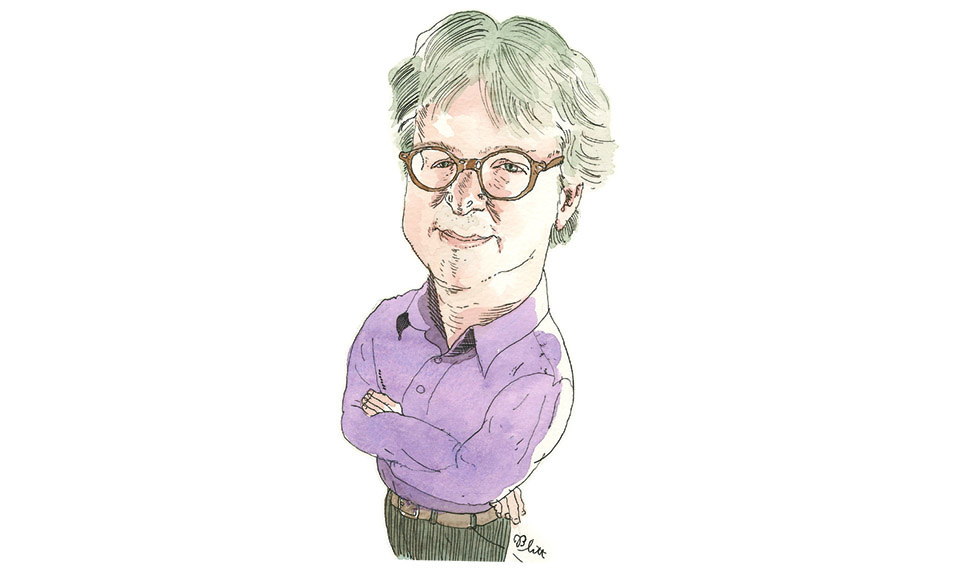 The Lake Forest College music professor was an exhausted, overwhelmed first-year graduate student at the UC Davis, when he picked up the receiver in the Era Before Cell Phones and heard his father’s voice.

John Meyer wanted to know how the youngest of his four children was doing.

“I was in over my head,” Don Meyer, 53, recalls inside LFC’s Reid Hall on Thanksgiving Eve. “School was super intense. I wasn’t really sleeping; so much work. When I spoke to my father on the phone that day, I pretended all was well. But he knew otherwise. He sensed it, heard something in my voice that concerned him.”

The father drove to the campus and had dinner with his son.

They talked.
They listened to each other.
Don Meyer breathed again, finally.
“My father did not give me any advice while we ate,” says Meyer, whose father died two years ago. “He felt I needed a break, and he was right. Our time together that night helped me. He was aware because he was a good listener.”

A good listen is the CD “Selections from Khalil Gibran’s ‘The Prophet.’” Meyer composed original music for the unique work of art—billed as “an evocative setting of Gibran’s 1923 masterpiece with a blending of live and electronic instruments”—and produced it with several of his students at LFC and at Dustin Bennett Studios, Lake Forest.

“It’s a strange little book,” says Meyer, a professor at LFC since 1995 and a Highland Park resident since 2001. “The short novel tells a story of a religious figure who is about to leave town. The residents of the town want answers to their ques- tions about life, love, marriage, pain, and other topics, before he leaves. They want to hear his wisdom. The sayings are thoughtful and positive.

“I like composing and collaborating with people. I’ve worked with artists, poets, writers. Now, with this CD, you could say I’ve collaborated with somebody who’s dead.”

The CD’s sixth track addresses joy and sorrow. “Your joy,” the narrator, LFC senior Fernand ben Qvyjt, begins, “is your sorrow unmasked … the deeper that sorrow carves into your being, the more joy you can contain.”

The CD’s 10th track reflects on pain. “Your pain,” Qvyjt continues, “is the breaking of the shell that encloses your understanding.”

“What that says to me,” Meyer notes, “is, learn about your pain—the physical kind, as well as the emotional kind. Pay attention to your pain. What is it telling you?”

The seed of the project, planted last January, was Meyer’s yearning to offset the negativity and stress in today’s world. Meyer didn’t just serve as composer of the CD; he also played the synthesizer.

“The CD reveals important, thought-provoking messages,” Meyer says. “Messages, I believe, people should hear, accompanied by our music. People are not listening to one another as they should in our current age. I love the process of mixing sounds together, and what I find exciting about composing music is, you never know how it’s going to make people feel. “I hoped, after we had performed ‘The Prophet’ selections at a concert at the college [on November 21], that peopleleft feeling calm, and at peace.” Some 12 years ago, Meyer’s History of Rock class at LFC was abuzz when student Chelsea Tallarico’s father entered the classroom one day. Tallarico’s father had asked Tallarico to ask Meyer for permission to audit the class for a day.

Chelsea’s father is Steven Tyler. Yes, that Steven Tyler. Of the rock band Aerosmith. “That was wild,” recalls Meyer, who believes Ike Turner’s “Rocket 88,” heard first in 1952, was the first single of the rock genre. “Steven Tyler sang in front of my students. He then answered questions. He wanted to be a full-on rock star, and he started singing at a dive bar in Boston. His big thing was, ‘Fake it ’til you make it.’ ”

Make music … as much as possible. That was Norma Meyer’s creed during son Don’s formative years in northern California. It still is. Don’s mother taught music at an elementary school. Today she plays the accordion and serves as director of the bell choir at a Presbyterian church.

“A very generous person, my mother, with such a good ear for music,” says Meyer, who also knows how to play the piano, baritone horn, tuba, guitar, bass, ukulele, and banjo. “My mother’s philosophy, in music, is, ‘It doesn’t matter how good the music is; keep making it.’ “That’s my philosophy, too.”

Meyer’s courtship with his future wife, viol teacher Liz, began when both were freshmen at the University of California, Santa Barbara. Their first date? Liz asked Don out.They watched the movie “Risky Business” on campus and then walked along a beach. They are the parents of Zachary, 26, and Zoe, 22.

Another of Meyer’s areas of study is film music. It fascinates and stirs him.There are reasons Alfred Hitchcock’s “Psycho” features heavy doses of violin music.

“That instrument,” Meyer says, “makes music that sounds like a human voice more than any other instrument does. It represents emotions. You’d think music, created by a violin, wouldn’t work in a horror movie like that, in a movie with violence. But it does, because at certain points in the movie, the violin is played abrasively—and every abrupt tempo increase makes a viewer’s heart rate increase.”

Meyer, on the soundtrack in Hitchcock’s “Vertigo”: “The music goes way up and way down, suddenly, throughout the movie. And that gives audience members a dizzying sensation; they feel disoriented and unsettled. That movie wouldn’t have been half as good as it turned out to be without that choice of music.”

What continues to move Meyer today is the noble profession of teaching. A top-notch teacher’s top three traits, in no particular order: empathy, empathy, empathy. Part of Meyer’s job is to lecture. But a bigger part of his calling has nothing to do with vocalizing.

And everything to do with empathy’s critical partner.

“Listening … it’s crucial in what I do in and out of the classroom, and it’s an ability I developed through music,” Meyer says. “It seems contradictory, doesn’t it? You’d think being a professor is all about talking in front of a classroom or doing most of the talking when a student visits a professor’s office.

Visit store.cdbaby.com/cd/donmeyer3 to purchase the CD “Selections from Kahlil Gibran’s ‘The Prophet.’ ”