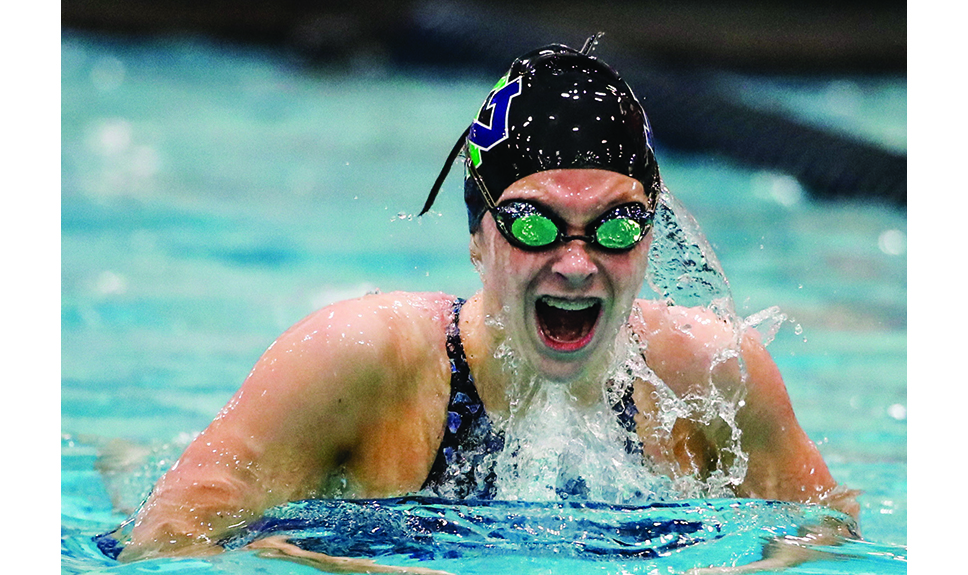 “We were so far ahead by the time I entered the pool,” Ohr said, heaping praise on relay mates Carly Novelline, Kaelyn Gridley, and Greta Pelzek. “That meant I had to deal with the waves that the swimmers trailing [in lanes 3 and 5] us were making.”

Degree of difficulty …it’s not just a factor in diving.

Ohr, unfazed, plowed through those forces and potential distractions and still—still!—came up big on November 23.The swift quartet clocked an Illinois State High School Association-record 1:40.43 to supplant a mark (1:41.68, set by a Fenwick foursome) that had stood since 2011.

Guy will have to hang on to something, tightly, for at least the next two seasons. Pelzek is a junior, and Novelline and Gridley are sophomores. Novelline later touched first in the 100 backstroke (53.92) at the state meet; in the next event, Gridley success- fully defended her state title in the 100 breaststroke with a time of 1:01.53.

The trio of gold-medal efforts highlighted the Trevians’ runner-up showing in the team standings. Eventual state champion Neuqua Valley led NT by only six points before the start of the final event, the 400 freestyle relay. NV then won the event in 3:23.98 to clinch its second straight state championship—and second in program history—with a 183-point total.

The Trevs had entered last weekend’s state meet with an undefeated record.

We …swam …so …well,”a proud,still-stunned Guy said following the presentation of team trophies. “We did our absolute best, finishing runner-up to an amazing Neuqua Valley team. What Carly did in the 100 back for us, after missing significant time with a knee injury this season, was phenomenal. Same for Kaelyn, winning another breaststroke title.”

Super stuff, for sure. But NT’s victory in the 200 medley relay—the first event of the finals session at the two-day meet—set a pulsating tone for NT’s entire crew, including talent-laden divers Erin McNally and Katie Lipsey, and deserves a spot on some List of Unforgettable Illinois Swim Feats.

The 1:40.43 will stick around.
For quite some time.
“Watching that relay made me want to do better,” said Lipsey, a senior who finished in fourth place (430.85points) and collected her fourth top-12 state medal.

“Our team’s energy level after the relay was so high,” McNally, eighth in diving at state last fall, said after taking third (433.3 points) at her final prep meet.

Pelzek, who served as the record-setting relay’s No. 3 leg, was somehow able to settle down after the thrilling accomplishment.

Ohr hit the water at state as a three-relay, 100-yard freestyle qualifier for the third year in a row. After anchoring the special medley assemblage, the Cornell

“Great leader,” Guy said of Ohr. “And she was such a rock for all three relays. I’m going to really miss her.

QUOTE-WORTHY: New Trier diving coach Bruce Kimball, on Lipsey and McNally after last weekend’s statemeet:“Great leaders, great practice divers. Both were consistent today [November 23], and both controlled the only thing they could control—their attitude. Both can be strong divers in college.”

LAKE FOREST HIGH SCHOOL: A King did not reign at the state meet last weekend, but Scouts fresh- man Mary Grace King certainly deserved a bow for finishing in eighth place in the 500-yard freestyle (4:58.38) in New Trier’s natatorium on November 23.

Only two freshmen from the event’s field of 33 had advanced from the state preliminaries the previous day to the championship and consolation heats.

“Yesterday [November 22, during prelims] was more stressful than today was,”said King, who planned to swim in a mile race at a club meet in Barrington on November 24. “I wanted to swim in the ‘A’ final [top 6], but I’m really happy. Apparently I looked really nervous to my coach [Carolyn Grevers] on the first day. Plus, I usually talk a lot, and I wasn’t talking much that day. Coach gave me good advice.”

King’s approach to racing on Day 2 at her first state meet?

“I listened to music and told myself, again and again,‘It’s just another meet.’”

LFHS senior Julia Tanna swam faster than her seed time in three of the four Athletes with Disabilities events. She earned a gold medal in the 100 breaststroke (2:09.03).