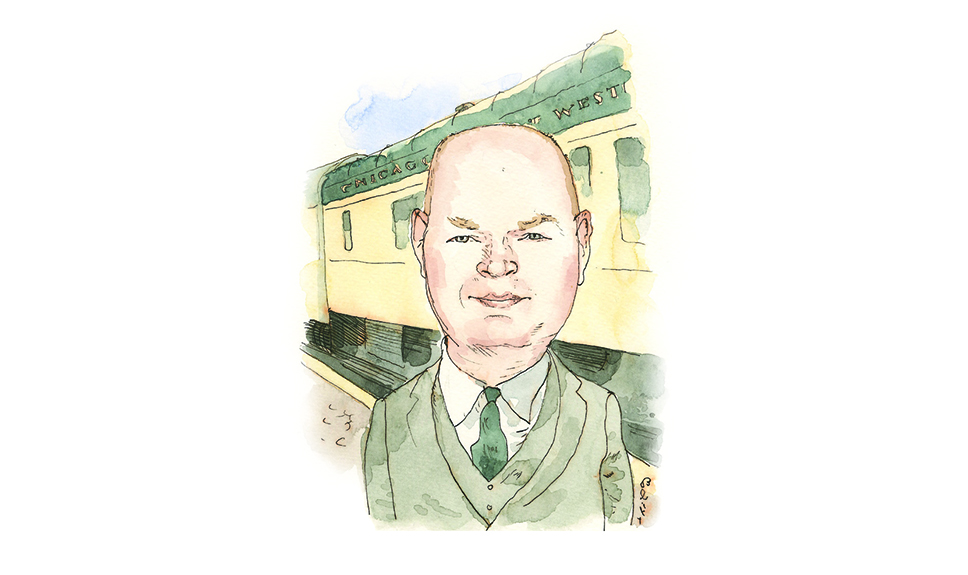 A minimum wage worker? A millionaire? A mother of four? A single father? It did not matter. Uncle Terry—aka Terry Bruce, native of downstate Olney, former member of the U.S. House of Representatives (Illinois-19th District)—would treat each the same.

Nephew Devon—aka Devon Bruce, Lake Forest resident, Chicago attorney, chairman of the board of Metra Union Pacific North Line Car 553, recently appointed vice chairman of the Teachers’ Retirement System of the State of Illinois—sits in a chair in a cozy room at his home, intermittent sparks from a fireplace providing both warmth and crackling, delightful background music.

“Uncle Terry,” the affable-to-the-bone Devon Bruce says, “showed deep respect for everyone. The influence he had on me was indelible. I loved joining him on his trips when he was in office. He was a middle-of-the- road moderate, sworn in by [former Speaker of the U.S. House of Representatives] Tip O’Neill. Remember Tip? He worked well with Demo- crats and Republicans. Uncle Terry did, too; he worked through differences, like all good, civic-minded people do.

“Today?” adds the 49-year-old, a graduate of Springfield High School, home of the Senators. “There’s too much polarization in politics and in our country.”

You wouldn’t find an iota of that in Car 553. Formerly known as “The Deerpath,” the private rail vehicle is
the only operating membership com- muter car in the U. S. It stops in Lake Forest, Lake Bluff, Highland Park, Winnetka, and other North Shore towns to and from the city. Under Bruce’s leadership three years ago, Car 553 was refurbished. It received new carpeting, upholstered seats, a modern refrigerator and a small bar (coffee in the morning; other beverages in the late after- noon), among other upgrades.

The setting’s warmth hugs its riders and later lets them breathe as they prepare for the workday. “There seems to be a mystique to the car,”Bruce says. “People enter it for the first time and think, ‘Oh, this feels exclusive.’ But I don’t look at it that way. Yes, people submit applications, and there is a cost … a very reasonable cost. But the car is welcoming, with guests allowed to travel with members. Six college students, serving as interns at companies in the city, used Car 553 for their commute last summer.

“It’s all about the camaraderie in the car,” he continues. “It’s very, very social for many of us throughout the 32-mile, 53-minute commute. We sit down. Some work. Some talk. We make lifelong friends.”

Bruce pauses. He has a man on his mind. A lifelong friend. A Lake Forester named Richard

“Buzz” Norton. Apparently any discussion about Car 553 without mentioning Norton is akin to a How to Build a Rail Transport Car book without a chapter devoted to metal wheels.

Bruce, who moved from Chicago’s Bucktown neighborhood to Lake Forest with his family (wife Yvonne, a native of Ireland, and their four children, ages 17 to 10) about five years ago. “He’s a funny, funny man, quick-witted, and very kind. He’s been the lifeblood of Car 553 for decades. ‘Buzz’ is the reason Car 553 exists, the reason it’s still on the tracks today. We owe it all to him.”

Norton and Bruce traveled together to East St. Louis a couple of times after the decision was made to spruce up Car 553 in 2016. East St. Louis is home to a company that specializes in refurbishing rail cars. Do something right or don’t do it at all, right? An antiques dealer and former Lake Forest mayor, Norton likes to hit estate sales with Yvonne Bruce.

It’s time for Devon Bruce to share an engaging story—one that happened on a night in Dublin years ago. He was in a bar with friends and loved ones, at around 9:30 p.m., and he noticed a man had just entered the establishment. The newcomer looked to his right, then to his left. He stood around, for a while. Bruce identified with him.

“We’ve all been there,” Bruce says. “You know, when you’re not sure what to make of a place or if you want to stay there much longer. Nobody said anything to him, so I did.

The men sat together and got to know each other. They talked bird hunting, one of Bruce’s many passions. The acquaintance’s last name? Guinness. Arthur Edward Rory Guinness, specifically, a member of the family known for producing a certain stout beer and none other than the 4th Earl of Iveagh. The denizen of Elveden Hall in Suffolk, England, was a member of the House of Lords from 1992-99. Bruce calls him Ned. Ned has visited the Bruce family in Lake Forest. Bruce plans to visit Ned in early December.

“It doesn’t cost you anything to be nice to people,” says Bruce, the son of educators Ken and Rosalind Bruce. “I grew up surrounded by kindness. My parents, my grandparents … all kind, all giving. My sense of civic duty—being around Uncle Terry, more than anything else, gave me that.”

A trial attorney at a small firm in Chicago, Bruce serves in various capacities on several boards, including Navy Pier’s, Lake Forest College’s, the Ireland Fund’s, and the Irish Fellowship of Chicago’s. Gov. J.B. Pritzker appointed Bruce to that position with the Teachers’ Retirement System of the State of Illinois.

But the role Mr. Bruce cherishes the most starts with a “D” and ends with a “d.”

“I don’t have a degree in parenting,” he says. “Who does? What I can do is set an example, pass along values and morals and the importance of giving back. Yvonne and I have to be constant examples for our children.

“They’re watching what we do.”